Is there a good text for someone who is starting BJJ? Some martial arts have good, solid, textbook style texts that follow a clear learning path, some don’t.

Does BJJ have one (or more)?

Hmm. It is extraordinarily difficult to learn a grappling art on your own from a book.

Any BJJ book you find will be best used as a supplement to a class, or to pick up new techniques.

It is just impossible to do many basic grappling maneuvers without another body to move around. Not to mention that the heart and soul of BJJ is practice against a live training partner.

Books are only good if you are taking classes. Details matter in grappling. Little things like where you hand goes, or what grip. So books are something to review after practice.

[quote]CaliforniaLaw wrote:
Books are only good if you are taking classes. Details matter in grappling. Little things like where you hand goes, or what grip. So books are something to review after practice.[/quote]

So what would you recommend to review after class?

pch2 wrote:So what would you recommend to review after class?

I remember there being a thread on this. Pretty long, IIRC.

I’ve a friend taking classes, she complained that they didn’t follow a clear progression and she was feeling lost, so I thought I’d ask for a good supplemental text.

If this were Judo or Shotokan I could just lend her the right books.

I’ve seen some threads on books and DVDs, but not on a good supplemental text for a beginner at BJJ.

This is for someone taking regular classes, not for someone lost and trying to figure it out without instruction.

i like Eddie Bravo’s books (JuJitsu Unleashed and Mastering the Rubber Guard), but they’re not "traditional BJJ… 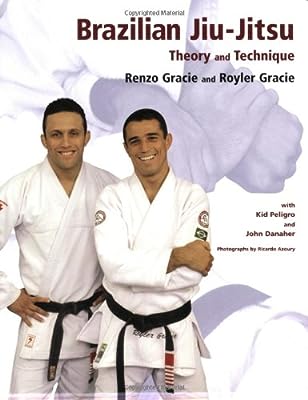 Thanks, the reviews, especially one of the two star ones, point out that the recommended book is a great introductory manual (then carp about other things). Perfect I think.

Be warned that there is no 1-2-3 recipe for BJJ. I’m sure your friend’s instructor has a coherent curriculum (either that, or it’s a bad instructor). It takes time to introduce, reinforce and refine all the skills needed to develop a BJJ game. Patience and perseverence, grasshopper!

Good idea for her as a beginner(wish I had done it): take a notebook with her to class. Immediately after class, write down what moves she learned, and any tips or points that were emphasized during the instruction, as well as any mods she felt necessary to make it work for her. This way, she is writing her own ‘text’, which she can go back and review at will.

When I took aikido years ago, one of the brown belts(he made black while I was there) did exactly that, even as a brown and junior black. He told me he had a shelf full of training notebooks at home. As he progressed, he said he had also started adding notes on how he felt personally about the move, ie, high percentage or low, did it feel awkward, did he just not like that move for some reason. Yes, aikido and high percentage moves may not necessarily go in the same story, but you get my point.

One of the best things your friend can do is ask someone for help regarding positions. I was absolutely clueless for about a month when I started BJJ because our classes would rotate between various submissions and positions and I never really figured out the basics of each until I found an experienced purple belt that basically showed me the basics and theory of each position.

For books I’ll exho the earlier one about Ed Beneville and Joe Moreira’s “The Guard” as a good text for beginners. Lots of pictures and clear progression between positions and situations. Perhaps it doesn’t represent the greatest techniques or so on, but it clearly depicts the situations and responses for the trainee. It’s a good, basic, learning guide.

The notebook idea above is a good one, and one that I still employ so that I can remember and visualize certain details about moves that I would otherwise forget