Zombies, What Would You Do? 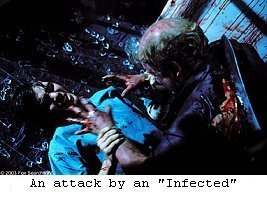 “Quick hit him in the head before he turns your neck into his spaghettios.”

Ok so zombies have infested the earth, you have 10 minutes to pick whatever weapon you want, then you can go kill zombies for a few hours, eat alot of food, and have hot nasty end of the world sex. But first things first, how you gonna kill the bastards?

For type one i think a baseball bat wrapped in barbed wire would be the most fun, for type two a belt fed fully automatic chaingun, yeeehaw.

Call in the SEALS.

Oh wait, pretty soon they will be a bunch of weak ass pussies who will be able to run fast but have no strength so that won’t work.

I’ve been training for this occurrence for years. At the risk of running out of ammo… a healthy array of Japanese blades and the means to sharpen them. Grenados for fun. If I could pick ANYTHING, I’d take a light saber and be invincible.

In fact, as soon as baseball is over, my training resumes.

Simple, we need to outsource out protection like we do everything else !

Considering a fire axe or sledgehammer will be close-to-hand, I may pick those up. A baseball bat may be there too. Ideally, if near a home improvement place, daddy is going shopping for weapons of mass-pain. I have a home depot up the street ! Wheeeeee ! Home-made flamethrowers and chainsaws anybody ?

Molotov cocktails are easy to make ! However, I am shit-fucked for most guns. I know Canadian Tire has ammo but no guns lol.

I’d swear a lot and have nifty war-cries ! Better to die with something witty being uttered beforehand, I always say. " I am tired of all these motherfuckin zombies in this motherfuckin city !"

I second the Lightsaber idea.

M-16 with a whole lotta ammo. Singletappin in the skull would last a while. For backup it would be good to have a 2-3 foot long hammer/club. I would also have a full body kevlar(sp) suit for good measure.

Setting up in a treehouse would probably be a good idea. I highly doubt that Zombies can climb.

Just get Chuck Norris to sort the fuckers out.

[quote]Helga wrote:
Call in the SEALS.

Oh wait, pretty soon they will be a bunch of weak ass pussies who will be able to run fast but have no strength so that won’t work.[/quote]

you bring up a good point, with chuck norris, vin diesel and Mr. T running around, we’d have no option other than to sit back and see who can kill the most out of those 3

A tribute to the late organization, complete with historical information, biographies, weapon guides, and details regarding the biology and behavior of vampires, zombies and werewolves.

The Federal Vampire and Zombie Agency.

Blunt force trauma depends on shock against living tissue. They’re dead. All you’re going to do is slow them down, then get overwhelmed because it’ll take extra hits to take 'em down.

Axes? Nice for a few shots, but they’ve got a nasty habit of getting stuck in things. These things are dead. You cut off a limb, they’re not stopping. You need to remove the head from the body, and the limited cutting surface of an axe makes that more difficult. Plus they’re unbalanced weapons, and it’s harder to recover from a swing.

Swords. Elegant. Swift. A good hit from a strong man can split a human body in two. Even if you miss the target of the neck, you may simply cleave the head, or do enough body trauma to render them harmless (or nearly so).

The zombies were sprinting in Dawn of the Dead? Are you sure?

Well first things first, I would probably have to shed all this useless non-functional muscle because in no way would it help me swing a sword or sledge hammer harder.

After that I would take up XMA and trick them all to death while doing flips over my bed onto this fine ass girl ur talking about here.

The zombies were sprinting in Dawn of the Dead? Are you sure?
[/quote]

I think he means in the remake, not the original.

As a horror movie and video game afficiando I have concluded that the best single weapon to have on hand is a powerful shotgun. This should work for both types of zombies. There are just too many examples of people trying to use some of the weapons above and getting eaten. Then non-gun weaponary is too difficult to use on the vast numbers you are likely to meet. The machine guns listed suffer from being inaccurate (not the guns but the users), though they do have their uses.

Conclusions: High powered machine guns would be best until the zombies are within good shotgun range. Then, a shotgun (with relativly fast reloading) as the primary weapon. Handguns should only be used in the cases of (a.) close range or (b.) running out of ammo for the shotgun or (c.) no time for reloading. In a pinch, or against few zombies, blunt force objects (baseball bats, etc.) are a good choice for preserving ammo. I would caution against the use of blades, let me give you a scenario: 3 dead ass bastards are coming at you so you decide to use your blade, you swing at the first one (stabbing seems pointless), and you miss the neck by inches…so now, oh fuck, the sword is stuck in the meat of the zombies shoulder (or head) and before you can pull it out, you’re a midnight snack for the other two.

Holy Crap, I just looked at what I wrote and realised that I am a huge dork, oh well back to D&D.

The zombies were sprinting in Dawn of the Dead? Are you sure?
[/quote]

To add my input:
I second the Chuck Norris proposal.

shit…i really fucking hate zombies. when i was younger, i got mono, and sat at home watching the original “night of the living dead” movie that was looped on A & E. i watched it over and over and over…now, i can’t even play Resident Evil cuz i’m a chicken shit of zombies.

so…i’d probably just gun the fuckers down with a sawed off shotgun…don’t want them near me at all. little cocksuckers that they are.

I have been involved in many in depth discussions on this very topic. The short of it is, if you aren’t prepared before the zombies attack, you are zombie food. Survival depends on having an isolated easily defendable shelter with lots of non-perishable food and fresh water stocked on land with abundant wild game. If you’re going to rely on katans, you’re zombie food. If you need a sword, go with a broadsword, as it has a realistic chance of decapitating the target. The katana has virtually zero chance of decapitation.

Better to have a warhammer than a sword. It weighs about the same as a sword, and doesn’t need to be sharpened. zombie brains are still intact, so the blunt force trauma will effect them significantly.

Prepare for zompocalyspe today so you aren’t zombie food tomorrow. 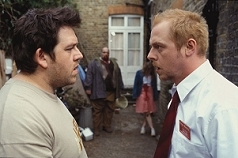