Zombies are BacK Again

Started dragging the tire around the neighborhood again about two months ago to begin conditioning for the heavy stuff. Using my Cinder block Farmers rigs again. And last week pulled 305 during my very first time with the bar. 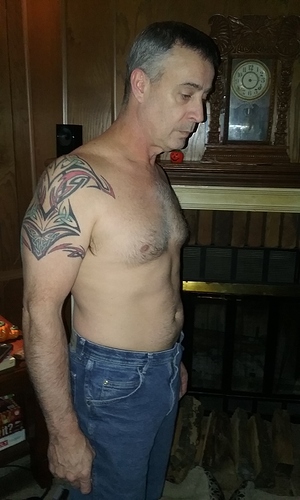 1536×2560 1.03 MB
Well I’m really gonna commit myself here by doing something I’ve never done before, and that’s post pictures of my shirtless self. Really only because I have begun to post some videos at U-Tube beginning this new segment of the journey. After a ruptured biceps, and a torn rotator cuff, I honestly thought I was done. T-Mag was my single best source of information as a lifter over 40, because of this community of lifters and people like me who just love carrying heavy shit. Sharing information like no other place I could find. If I can give back a little of what I learned over the last decade or so I’d like to. I’ve been a cooking and food person for most of my career so I thought I would do some cooking as well. So here goes, the bold first step into the next segment of my journey to stay strong and healthy.
daddyzombie October 18, 2015, 9:32am #3 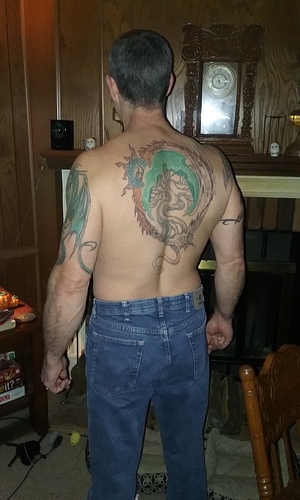 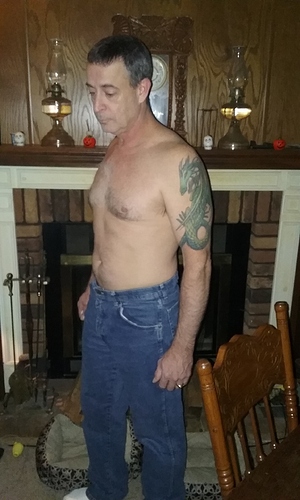 enjoy your quest! I’m going to follow because finally there is someone my age and weight… 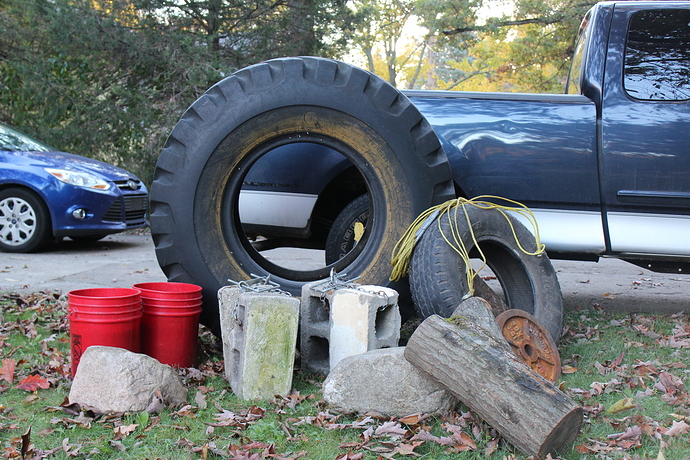 [quote]OldGoat wrote:
enjoy your quest! I’m going to follow because finally there is someone my age and weight…[/quote]

That’s exactly why I came back to T-Nation, there are guys my age.
Here is a look at the majority of what I call my yard toys. Some I made, some are salvage, none of it cost much. Under the carport I’ve around 385lb of rusty iron and a bar. I am looking into a gym near work, to get some work I can’t at home. But my yard toys are currently my workouts.

Yard toys in action…I could not find that this was not allowed.

I knew that was you, even before you said “cinder block rigs” !

I once suggested (only half kidding) to put a deadlift attachment on the mini-van that showed up in a video/pic.
I also recall you jacked up your hand, banging it between large/heavy racks of “gourmet smoked meats”. Something like that.

Welcome back; glad your on the road again.

[quote]denver z-man wrote:
I knew that was you, even before you said “cinder block rigs” !

I once suggested (only half kidding) to put a deadlift attachment on the mini-van that showed up in a video/pic.
I also recall you jacked up your hand, banging it between large/heavy racks of “gourmet smoked meats”. Something like that.

Welcome back; glad your on the road again.

Wow…that was a long time ago. I can’t believe you remember that! Thank you so much,I’m very glad to be back. I’m the boss at work now no longer killin’ myself for the job. Now all my energy can go into lifting. Dave
[/quote]

As mentioned, I’ve been draggin’ tires, flipping tires, walking with cinder blocks etc for about 8 weeks. I wanted to get my wind back for some real training, and just make sure everything was going to work before I started pulling again. Here is a video of the final pull of the day last week during my first day pulling in over two years. Once again, I’m 54, 5’9", and currently weigh 176.

I enjoyed your video.

Do you ever train conventional deadlifts? I say that because I would peg you for a conventional puller given your leverages and the way you pull semi-sumo.

[quote]kpsnap wrote:
I enjoyed your video.

Do you ever train conventional deadlifts? I say that because I would peg you for a conventional puller given your leverages and the way you pull semi-sumo.[/quote]

Thank You,
When I first learned to pull I pretty much taught myself pulled very conventionally, and had no idea what sumo was. I saw some guys pulling really heavy with sumo, so I started to practice. Sometimes I’ll fool around with leg width, but will usually go with pretty wide legs now.I didn’t get it on video, but I’m pretty sure my PR in competition @410 was sumo.

Still kind of putting things together as I feel like it. Flu bug over the weekend, today went like this.

1x10x45ea.one arm rows kind of exaggerated way out and way back to be a triceps row also.

Those 4 things, 3 times. Not a lot of rest, whole thing took 40 minutes.
I’m working third shift again so my workouts are kind of at the end of my day. For anyone who looked at the video on Utube. The calorie deficit from dragging so much is killing me, I’m gonna have to drop to once or twice a week. Dave

Found a really cool web site that is dedicated to just the dead lift. Settled on a decent looking 12 week cycle that I can begin here in the carport until I go check out this gym near work. Feeling some tightness in the lower back so today will be rather slow and deliberate.

Shove the end of the straight bar into the wood pile and load the other side. So a simple set turns into quit an ordeal sometimes.

Deads
WK1 Calculations for program will be based on SRM of 310
75x8
125x5
170x3
220x8
Good last set, should be one more from a deficit, but I felt a strain in the hamstring right away so I’m calling it and taking the girls to get pumpkins. Dave

Not happy with yesterdays session at all. All I got out of it was a sore hamstring, and maybe one good set of deads.

Holy shit what a workout today. I got some of it on video but I’m not sure yet if I want everyone to see me puke. Maybe I can get my daughter to edit that part out.

Tire sled drag is 0.8 mile, I stop at three designated spot and NEVER before to change the position of the rope. If it’s possible to make this harder, try it really fast.

When I returned I cooled down with two trips around the yard with that new hunk of wood I was given the other day.

Then since the ground wasn’t too, too wet I got the flipping tire out and hit 6 hard sets, a total of 51 flips. The last two were one after the other. Got it on video, but after set #6 I puked. That usually only happens on Dead lift day.

This is the last segment of my tire drag from a few weeks ago. Today’s was much harder.

Stones
2 sets around the yard W/82lb stone. About 110 paces each
Then one more set W/ 120lb stone, more like 80 paces.
Got a video of the last set uploading now. That last set pretty much wiped me out like yesterday.

Your videos are fun. Great functional strength you’re building there. And your neighborhood is so pretty. I was a Midwestern girl once. I miss those leaves and the lushness.

Yes, fun, like she said. Looking strong man. Just a nice stroll down the lane, dragging some heavy ass shit with tow straps wrapped around you.

I remember,back in the old days, thinking about your neighbors saying " oh, that’s just Dave".

[quote]kpsnap wrote:
Your videos are fun. Great functional strength you’re building there. And your neighborhood is so pretty. I was a Midwestern girl once. I miss those leaves and the lushness.[/quote]

Haha, that’s actually what I noticed too. First I thought, wow great ingenuity, then I was ooooo nice neighbourhood.
Nothing wrong with another Zappa fan around here, such a loss. I saw another username as The Central Scrutinizer, which would’ve been another fun one.