A few decades too late. Be interesting to see how this turns out.

Zimbabwe’s army said it detained longtime President Robert Mugabe and seized control of state broadcasters in an apparent coup in the southern African nation. Military vehicles rolled into the stre…

Some would say 37 years too late

Incidentally, I know a guy who used to be his personal physician. He claims to have never met such a genetic freak in terms of longevity. Mugabe allegedly possesses an iron constitution - my friend said he wouldn’t be surprised if he made it to his 110th birthday.

Oh, and he’s a ruthless psychopath who destroyed Zimbabwe.

If you read any of his speeches man. Now THAT’s a demagogue. It’s always someone else’s fault this country sucks, despite decades of his rule.

Why didn’t your friend put an air bubble in his veins or something? Kidding.

They should do the world a favor and put Mugabe down like a sick animal. Hell needs to up it’s body count.

If you’ve never follow African politics, this man is an atrocious dictator, right up their with the worst in history. Murder, starvation, torture, razing, burning, you name it, he did it to his own people.

my friend said he wouldn’t be surprised if he made it to his 110th birthday.

The African air must have something in it. Like Keith Richards and shit, he must have made a deal with the devil.
It’s a beautiful country from what I have seen in pictures, but he ruined it in many ways. It’s like the picture of Africa you get in your head when you think of Africa. Lions, ligers, bears (oh my!) giraffes, monkeys, gorillas, birds, elephants, etc…

Why didn’t your friend put an air bubble in his veins or something? Kidding.

He would have been a hero…

This is going to be really interesting. I didn’t think Mugabe was ever going away.

Sadly they’ll just replace him with a military dictator psychopath

Sadly they’ll just replace him with a military dictator psychopath

That’s my guess as well. From what I’ve read this was in response to Mugabe dismissing his vice president last week … don’t know the circumstances surrounding that.

Why didn’t your friend put an air bubble in his veins or something? Kidding

Because he was being paid. A lot.

What would he think? Nothing. In order to work in dictatorships such as Zimbabwe, not only in central Africa but elsewhere, one needs…how to put in in PC terms… a certain moral lassitude and flexibility. If you don’t mind eating steaks and drinking quality French wine while the oppressed locals are starving and/or getting killed by the people that are paying you, well, it sure is a lucrative business.

You’d be surprised how many Westerners are making a killing doing seemingly innocuous work in central African countries - IT guys, banking/finance managers, pilots, security personnel…even gym staff (!). You just have to have a stomach for it. Around 100k Portuguese nationals are working in Angola which is arguably a family dictatorship run by a very odious father/daughter team.

I also know a guy who owns a ridiculously expensive restaurant in Nairobi, Kenya. It’s absurdly expensive, especially for Kenyan standards but it’s loved by the African nouveau riches and is frequented by elites (ahem) of Kenya and neighboring countries. And the reason for it’s success? It has an all white staff from cooks to waiters, all brought in from Macedonia and the locals get a kick from seeing the typical racial roles reversed.

As far as my friend goes, I missed out on many outrageous (and successful) business ventures thank’s to his connections at Mugabe’s court, whether dismantling luxurious villas of white landowners from 1920s and rebuilding the abroad to trading in precious metals.

As far as Mugabe’s rule is concerned, I strongly suggest watching “Mugabe and the White African”, the entire documentary is available on Youtube (trailer below).

What would he think?

I meant as far as thinking Mugabe would make it to 110.

I meant as far as thinking Mugabe would make it to 110.

Now? Probably not. Everyone knows the secret of a long life is keeping oneself occupied.

As the infamous Malawi dictator dr. Hastings Banda (died at 99) once said - “I’m too busy to die” Hastings Kamuzu Banda (March or April 1898 – 25 November 1997) was the leader of Malawi from 1961 to 1994 (for the first three years of his rule, until it achieved independence in 1964, Malawi was the British protectorate of Nyasaland). After receiving much of his education overseas, Banda returned to his home country (then British Nyasaland) to speak against colonialism and advocate independence. In 1963 he was formally appointed prime minister of Nyasaland and, a year later, led the country to ...

And I am not so sure… The X factor on what happens in Zimbabwe, from what I understand, is how invested the UK becomes in their former colony. England came close to sending some military assets there through out Mugabe’s reign due to the treatment of British citizens and territory that was still technically British. They gave up the colony rule, but not all their assets. During the ‘raze and squat’ phase of Mugabe’s reign they pissed England off pretty fierce.
With Mugabe out of the way, I could totally see them sending a coalition there to reestablish relations and influence how the government turns out, pushing more towards democracy.

Thanks loppar, I would not have known this film existed if you didn’t introduce it. I get the locals feelings toward their British honkey rulers, but Mugabe was borderline genocidal… Like it or not, Zimbabwe was better off under british rule than mugabe. It’s not that the british were so great, it was that Mugabe was so bad. 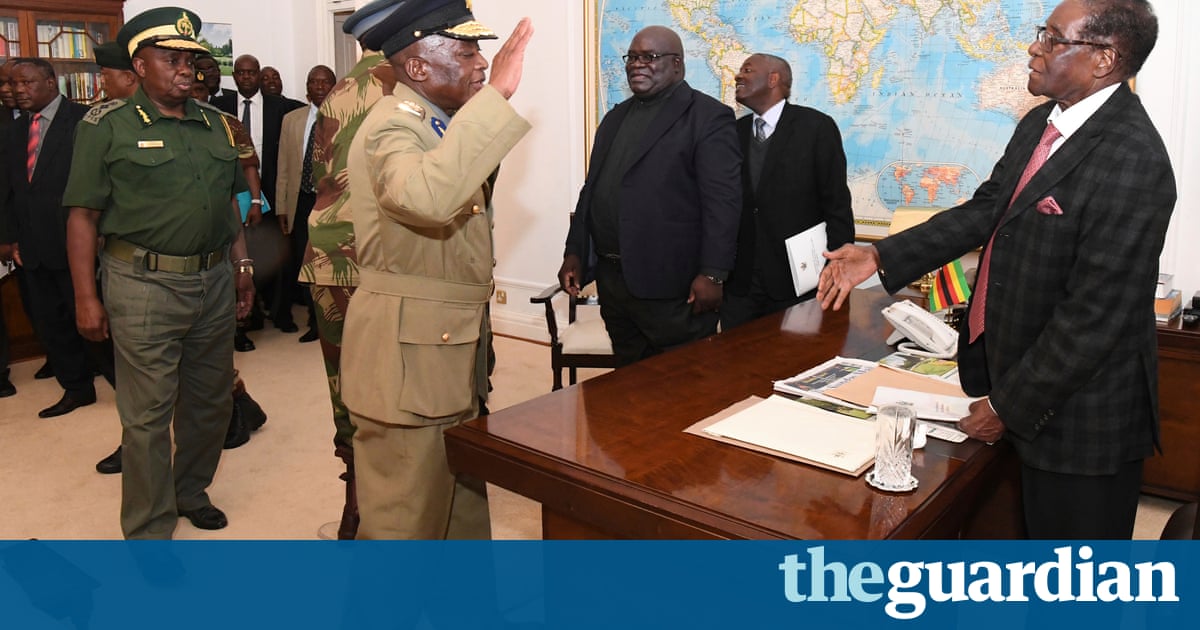 Robert Mugabe stuns Zimbabwe by failing to quit – as it happened

Quite frankly I’m surprised they didn’t just imprison and kill him. This seems very civilized for African regime change…

Quite frankly I’m surprised they didn’t just imprison and kill him. This seems very civilized for African regime change…

It seems that a “peaceful transition” was one of the conditions set by China for continued financial support to the junta.

The “Old Crocodile” understood this and turned tables on them.