When doing Zercher squats, doesn’t the bar dig into your elbows and forearms? If so, how do you address this?

use the bar tampon, wrap a towel around the bar, wear a sweatshirt

If you hold a board in the crook of your elbows you can place the bar on it, that makes it a bit less painful. That’s the best solution I can think of besides buying a Zercher harness, but those cost quite a bit if memory serves me.

Try putting the bar on your traps.

Back when I had to do them (no squat rack of any type) my school had a bar with athletic tape around the gripping area and that helped a lot.

Wear a hoodie. I only zercher squatted for the first time about 2 weeks ago, and I managed to work up to some pretty heavy weight…it hurts a little, but just like back squats and front squats, you kinda get used to it, and it also gets a little more tolerable.

Whenever my weight training coach would have us do zercher squats, he had a piece of foam around the middle of the bars. It wasnt expensive, just your typical foam that you find in michaels or linens and things that he had cut into smaller tubes and wrapped them around the bar.

Really thick sweaters are nice too. I used to hate doing these, but then I got pretty good at them so it was ok

once you’ve been doing them for awhile and start using some weight the last thing you will worry about is discomfort holding it. it’s like people that complain about the bar hurting their upper back when they squat. after awhile you get used to it.

i do zerchers pretty much on a weekly basis. i definitely wouldn’t recommend wrapping the bar with anything. when lifting heavy, you want that bar to sink into the crook of your arm. otherwise it will roll on you.

[quote]ghost87 wrote:
When doing Zercher squats, doesn’t the bar dig into your elbows and forearms? [/quote]

I get a little bruising the next day, but it’s not at all uncomfortable to perform. On the contrary it’s probably one of my favorite movements. I wear a regular long sleeve T-shirt just to prevent pinching the skin.

DixiesFinest I am aware of that, it’s actually the whole point. But I appreciate your concern. If his zerchers are anywhere near his front squats, I’ll have some extra motivation to stay serious.

i like a lot of variety with squat variations and i feel that zerchers are the best lower variation you can do. it not only will improve your squat but also your dead.

so… to answer your question- i’ve hit over 600 starting off of pins for singles. recently i’ve been doing full ROM going rock bottom and pausing for 5 seconds or so in the hole. with that i’ve worked up to 405 so far. as for reps and sets it really depends on where in my training they are. if i’m using them to develop strength i keep the reps low, from 1 to 3. for hypertrophy i usually will work up to three sets of 6-10. my new favorite thing to do is one set of Rest/Pause where i do as much as 100 reps. this past lower session i did front squats for a set of 50 reps with only one stop to rest for about 10 seconds… very brutal.

again… i can’t say enough about zerchers and front squats. i only perform back squats now when i’m getting ready to compete. for overall quad development and core strength, they can’t be beat.

since i’m such a video whore, here are some of the variations that i do. 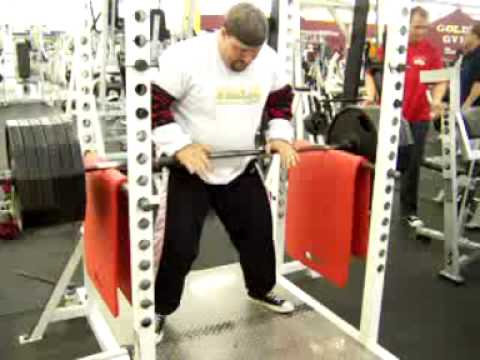 zerchers from a low box- As all the big guys here are saying the discomfort soon passes with time.

Regarding the hold, due to my very long arms I too had the same problem when I first performed them. The solution for me was bringing my hands literally together which brought my forearms and elbows closer into my body. I also needed to make sure that the bar was set deeper into the crooks of my elbows squeezing it hard against the lower biceps thus making sure that the forearms were far from parallel as possible.

I was instructed that if a trainee feels it in the forearms then he/she failed to set deep enough and/or were not squeezing the bar hard enough. Also, the bar squeezing is supposed to assist in tighening your core for the movement. So, you are supposed to feel it more in the lower bicep and in the crook.

Just so you know I am not a heavy Zercher lifter; I have never lifted more than 255. I just thought my experience may help you some how. Good luck.

Damn Meat!!! I hate you and those aerobics steps can take a beating.

Holy shit Meat nice work. My best is 315x2 so far, deadlifting the bar into position on my quads then starting from the bottom. I got some work to do now.

[quote]ucallthatbass wrote:
Damn Meat!!! I hate you and those aerobics steps can take a beating.[/quote]

i’ve learned to be creative training in a commercial gym.

[quote]hungry4more wrote:
Holy shit Meat nice work. My best is 315x2 so far, deadlifting the bar into position on my quads then starting from the bottom. I got some work to do now. [/quote]

i’ve tried the zercher deads into squats. didn’t really like them… too much moving around from one position to another while under load. too high a risk for injury for me.

315 for 2 is pretty damn good for that hard as shit movement.