You're Taking Your Pills Wrong

An Easy Way to Make Them Kick in Faster

A Better Way To Take Pills Or Capsules

I suspect some people imagine the stomach as kind of like the vat of molten steel that killed the T-1000 in “Terminator 2,” only instead of a cyborg composed of liquid metal, you’ve got pieces of meatloaf, snow peas, and assorted organic compounds flailing around in the stomach as their life force leaves them, after which a piece of asparagus might, in a heroic act of self-sacrifice, lowers itself down into the same boiling cauldron.

Well, the stomach isn’t quite as inhospitable an environment as all that. Foods do get “dissolved,” but slowly and efficiently and without nearly the same cinematic splendor as the T-1000.

Partially dissolved foods are then methodically ejected through the pylorus – the valve at the bottom of the stomach– into the duodenum, where the nutrients start to be absorbed.

This process isn’t quite the same for pills, tablets, or capsules, though. Normally, the speed at which an encapsulated drug or supplement gets dissolved and put to work depends heavily on gastric motility (how much churning your stomach does), the physical properties of the pill or capsule, and how much food is already being processed by the stomach.

There’s something else that determines how fast a pill or supplement goes to work, too, and it’s something you have total control over.

Ordinarily, the speed at which a swallowed pill goes to work isn’t a big deal, but what if you’re taking a pain pill and you want it to kick in pronto, instead of an agonizing hour or two from now? What if you want a sleeping pill to take effect right away, instead of at 3 AM when the “King of Queens” reruns start?

It can be done, and it’s incredibly simple.

Food – assuming you’re not a boa constrictor, python, or Joey Chestnut – is first chewed, then masticated and swallowed, whereupon it’s slowly transformed into chyme, a mixture of pulpy acidic fluid and food. It’s of course not the same for pills, tablets, or capsules. They drop down into the stomach like rocks dropped off the dock at Lake Okeechobee and sink to wherever gravity pulls them.

If, hypothetically, you’re leaning to the right, pills would “land” near the pylorus, which is on the right side of your asymmetrically shaped stomach. As such, they’d be absorbed and put to work rather quickly.

Alternately, if you’re leaning to the left, they would land on the opposite side of the stomach, which, in gastric terms, is miles away from the pylorus. In that case, drugs or supplements may take a long, long time to take effect.

You’re probably thinking, “Okay, fine, but who the hell leans one way or the other when taking pills?” You’re right. Aside from drunks or street walkers that lean on lamp posts, that situation is rare. However, how many of you take sleep aids, or pain pills, or blood pressure meds before lying down or going to bed?

If you do, heed this: new research shows that if you lie on your right side, pills or capsules gravitate straight towards the pylorus and are absorbed in roughly 10 minutes. If, however, you lie on your left, it may take as long as 100 minutes for those pills to take effect.

How The Hell Do We Know This?

A team of Harvard scientists devised an “in silico” (a computer simulation) experiment to determine how quickly orally administered drugs go to work.

Their simulation, called StomachSlim, is a computer model based on high-res images of a 34-year-old male that was used to duplicate the fluid biomechanics of a pill moving through the digestive tract. By changing StomachSlim’s posture, they could tell just how fast it took a pill to drop through the pylorus into the duodenum.

How To Use This Info

As alluded to above, StomachSlim determined the following pill dissolution rates:

While the exact duration it takes for pills to dissolve in various postures might vary by type of pill/capsule and how much food is in the stomach, the numbers they came up with are probably a pretty good approximation.

One wonders, too, what the dissolution rate is for someone who lies/sleeps on their back, but we can probably guess that it’s somewhere in-between 10 minutes and 100.

While this info might seem trivial, at least for most pills in most situations, it could be extremely useful for people who take blood pressure meds, pain pills, or sleep aids.

For instance, these drug dissolution/posture findings might explain why sleep aids (Ambien, ZMA®, etc.) don’t work well for some people, i.e., they take a capsule or capsules and then try to go to sleep on their left side where it can take well over an hour for the pills to kick in.

The simple remedy might be to take your “pronto pills” (the ones you want to go to work fast) and then spend the first 10 minutes or so of bedtime on your right side before transitioning to your normal sleep position. 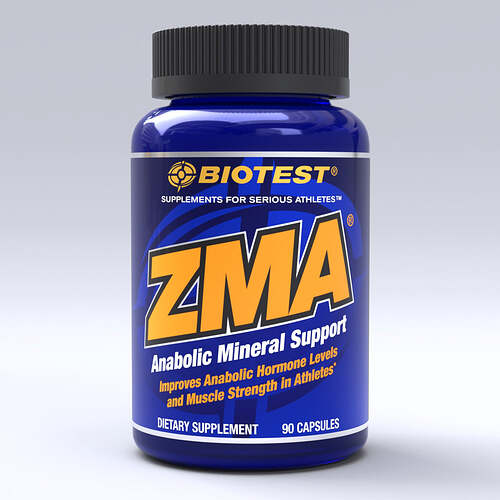 Enhance strength, recovery, and growth with a special zinc/magnesium formulation designed to replace deficiencies caused from exercise and stress.*

Always fasinating and useful information here. There were studies showing sleeping on one side or the other could have profound health effects depending on what ailments plague you. Thanks.

There were studies showing sleeping on one side or the other could have profound health effects depending on what ailments plague you. Thanks.

Thanks! On the same subject, being unable to sleep on your left side because it feels uncomfortable can be indicative of heart problems. It may also alter electrical activity to the heart.

On the same subject, being unable to sleep on your left side because it feels uncomfortable can be indicative of heart problems. It may also alter electrical activity to the heart.

Thanks for the article - I agree this was fascinating

I was getting fluttering and dizzy when on my left side for about 6 mos. after a STEMI.

I’m still most comfy as a left side sleeper.

You’ve since much improved your cardiovascular health though, right?

Meh. It stopped doing that, but after a couple complications and rounds of the 'rona my lvef is down to about 40% from 65%.

That last one was a doozy.

My last check up was ok though. Ekg was good, chest sounds good, generally ok and stable.

Ive just had a hard time balancing the time and energy that I do have with work or exercise. No matter what, I have 1 day up and 2 days down. I know I need the conditioning but kiddo needs shoes.

And mama needs Levi’s. I get it for sure - it’s tough to fit it all in anyway, let alone when you’ve actually got that kind of obstacle.

I’ll give this pill technique a shot.

I take enough of those!

I’ve been doing this with my allergy medicine and it does work more quickly than usual. Usual being just sitting down or moving around while straight upright.

This has been a game changer for me! I read it just after testing positive for Covid, and was able to time my decongestant kicking in at bedtime, etc. I’m not usually particularly rushed to feel the effects of meds, but I feel really happy to have the info. Thank you!