Your Stance on Beer?

While I’m sure it must have been asked before, what is everyone’s stance on beer? I was wondering if it would be ok to have A SINGLE GUINNESS on a saturday (dynamic legs). A single 12 oz. bottle has 125 calories, 4.2% ABV and 9.8 g carbs. Im not bulking or cutting right now, per say.

Some beers are good, some are bad.

Seriously, everything in moderation.

I occasionally enjoy a beer or two, but I don’t feel the need to wreck myself by getting drunk.

I would say that its probably not going to effect you all that much. I highly doubt its optimal for your progression, but everyone(read: normal people who dont do this for a living) does little things that are not optimal from a purely bodybuilding nature. You should choose if you want this to be a small deviance from your plan or not. 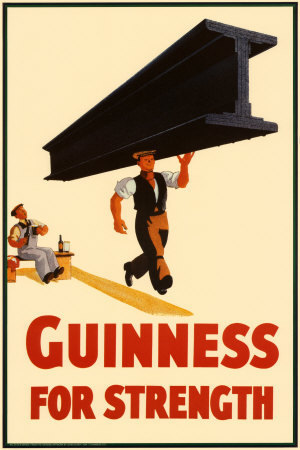 This sums it up, I think.

You can stop at one?

What planet are you form?

Um yes if I could stop at one and I wasn’t cutting or bulking I would see no problem with having a single beer.

I went on a binge on Saturday…hardly got any sleep for Saturday and Sunday night. My workout today was shit. However, I needed that night out…I was under a lot of stress and needed to blow off some steam.

Doing that every weekend is probably a bad idea. That being said, if I do drink it’s usually on Saturday and it’ll be 1-2 beers (consider it a cheat meal).

In one of the Physique Clinic threads, Thibaudeau and Shugart mentioned something about beer having an adverse affect on protein synthesis in the body (probably has something to do with either the alcohol or the hops, no?). As someone who enjoys building muscle, that struck a cord with me.

Now, personally, I don’t need to get schockered to have a good time. 1 or 2 beers is fine with me when I drink.

So, I would say that a Guinness on a Saturday night isn’t gonna kill you. Go for it, I guess, but it’s really up to you. How strict is your diet, etc?

Dude. Are you seriously asking permission to have a beer?

Maybe your goals are different than mine… my training focus is strength, size, and combat focused fitness… but, the occasional beer isn’t going to hurt anyone. From my perspective, generations of my forbears drank plenty of beer and were generally big, strong, guys.

I’m pretty sure I’ve had more than 1 guinness before and I was just fine the next day lifting.

Why limit yourself if you don’t need to?

Treat it like a medium insulin impact carb meal. (Though I’d want to measure it myself, it might be high impact) It should either be had as a cheat, for breakfast (though you have other problems if you’re drinking beer for breakfast) or right after you work out. Don’t forget to count the calories.

I remember I criticized someone on this forum for their suggestion that after a night of heavy drinking they had the best workout of their lives the next day.

After drinking nearly a fifth of Jim Bean through dirty sodas, the next day I had an awesome 2 hour workout, PRed in the Bench and the Snatch.

While I will not do this again, I’m gonna say that you can get away with quality beer unless your trying to get to 6% bodyfat and you can’t have any room for error.

So if you’re going to drink, Guinness is probably a good choice. It’s got lots of iron.

Dude just have the beer. In fact have two or four! If your diets in order otherwise don’t stress about one or two cheats. I remember reading how alcohol interrupts protein synthesis and also lowers Testosterone levels but really unless you are a bodybuilder don’t sweat it! Eat Clean, Train hard, and Lift heavy and you’ll be fine

I’d go with the Guinness can that has the widget. Just one pint is so satisfying.

Don’t sacrifice quality of life just to add TINY improvements to your lifting.

There are other lifestyle choices that would have serious adverse effects, but having the occasional beer or two isn’t going to hurt.

Thanks to everyone so far wih their opinions on here.

I’m kind of obsessive about my diet. Probably because I’m a FFB and I don’t ever plan on going back.

[quote]Padilla7921 wrote:
In one of the Physique Clinic threads, Thibaudeau and Shugart mentioned something about beer having an adverse affect on protein synthesis in the body (probably has something to do with either the alcohol or the hops, no?). As someone who enjoys building muscle, that struck a cord with me.

Now, personally, I don’t need to get schockered to have a good time. 1 or 2 beers is fine with me when I drink.

So, I would say that a Guinness on a Saturday night isn’t gonna kill you. Go for it, I guess, but it’s really up to you. How strict is your diet, etc?[/quote]

In the grand scheme of things, if your diet is on point and your workouts are taxing. 1 beer isn’t going to be a problem. Neither would a 6 pack.

I thought this was ironic cuz just last nite my 25 yr old, extremely cute gf with really annoying genetics (sumbitch can inhale carbs all day long and never gets fat) had the nerve to ask me, “honey how come alcohol makes me leaner? It’s like Jager burns bodyfat or something?”

God I hate that bitch…

It did make me wonder about the subject though?? It seems like binge drinking would at least short-term jack up your metabolism as your poor liver goes into overdrive trying to clear the alcohol from your bloodstream…I mean, am I the only one that sweats like a hog when I’ve pounded some Jack Daniel’s real fast?? And then the morning after I’m always shredded…most likely from being so dehydrated but still…

I think this needs to be explored and I for one offer to dedicate myself to the study of this phenomenon!

I personally quit drinking 3 years ago, but I used to drink fairly heavily before that.

I’ve always wondered though, why the fuck would anyone want to have only ONE beer? That shit is beyond me. I guess I’m an all-or-nothing person.

Yeah, I really don’t see a problem with you drinking a few beers every so often. As long as the rest of your diet is on tap (you said it was, so good), there shouldn’t be anything to really worry about. Have fun bro.