What was your very first workout program? Mine was the old Charles Atlas program. It was my dads & he gave it to me because I kept getting picked on. This was back in 89’. It was a good one & I still have it.

Whatever I saw Rocky, Clubber Lang, or Ivan Drago doing in the Rocky movie series…

Not sure, but I do have a fond memory from 10th grade when i first touched a weight … getting trapped on the bench with a whopping 95lbs total. Ahh those were the days.

Full body 3x10 with the vinyl weights filled with sand and concrete. Those were the days. Worked very well. Simple program, simple progression. I loved being 8.

my first routine was the standard, chest/back, shoulders and arms day, andleg day <which i usually skipped 'cuz i was too afraid to work hard>.

and i did a lot of training past failure.

[quote]itsthenickman wrote:
Not sure, but I do have a fond memory from 10th grade when i first touched a weight … getting trapped on the bench with a whopping 95lbs total. Ahh those were the days. [/quote]

i used to think i was a bad ass moving 45 pound dumbells on the incline press.

I was tired with the way i looked and a friend gave be bill Phillips book body for life and I was hooked I got down to about 10% body fat and looked great then i stopped and took a several year free day!

i used to think i was a bad ass moving 45 pound dumbells on the incline press.[/quote]

Leg Press, Pull Down, Dumbbell Bench.
I did it 3 x A week.

Aside from the “assigned” workouts during high school and college athletics, the first workout I chose myself was…Cybergenics baby!! After that I rolled with Big Beyond Belief, written by Tom Platz. 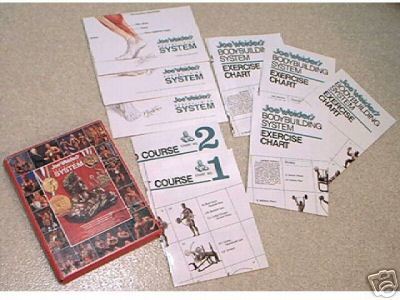 The old Weider course pack that came with a beginner, intermediate and advanced program printed on posters (with an 80’s bodybuilding superstar on each poster).

Those were cool. Eventually I “graduated” to Arnold’s Encyclopedia

Looking back, those are probably still my fondest lifting memories.

Besides assigned workouts for high school sports, it was Arnold’s Encyclopedia all the way. I was a sweet football player, so of course I was suited for the advanced program. That worked out real well for 3 or 4 weeks…

I was pretty clueless when I started out (too bad I didn’t have T-Nation back then!). I had some muscle magazines and tried different exercises I saw in them. First w.o. with weights was 6x6 on bench press once a week, EZ bar and DB curls for the biceps every once in while, and I’d throw in a few other movements just to try them out here and there (close-grip, DB row, pull-up, etc). With this “program” I added about 70 lbs to my bench in about 2 months. I didn’t start a structured program until much later when I joined a gym; started training legs too.

My first workout program was at my future highschool when i was in 8th grade. The weightroom was divided into 2 halves, and i was told (by the baseball coach) to do one half on monday and thursday, and the other on tuesday friday. It was essentially an upper lower split consisting of 3x10, worked great to increase strength fast, but imagine how terrified i was in there, surrounded by 250 lbs gennetic freaks and future D1 football players. Terrifying but it only made me push myself harder, by me senior year i almost set my weightclasses record for bench (5 lbs short).

My first program was a full body workout program that I was given by the basketball coach at my university.

It wasn’t great, but it was better than nothing.

[quote]Dirty Tiger wrote:
Leg Press, Pull Down, Dumbbell Bench.
I did it 3 x A week.[/quote]

That’s not a bad workout. If you subbed in squats, maybe changed pulldowns to pull-ups (if you could do them) then that would probably be better than 90% of people at my gym.

My college football lifting program. Took all of 2 hours to finish. Focused mainly on big compounds like squats, hang cleans and push press. They didn’t have receivers doing deads so I had to learn those later.