You Can't Be Serious...Tendonitis Follow-up

Alright so i posted about two weeks ago about my tennis elbow. I had all my appointments today And wow what a bad day.

Alright so i went to PT and i have this lady, the first thing she realizes is its Tricep Tendonitis not tennis elbow. She hooks me up with some thing that shocked some steroids into my elbows, we get to talking and she proceeds to tell me, “Hey, if you wanna play football you might wanna consider not lifting weights.” You cant be serious! Alright so that went kinda bad but my elbows didn’t feel too bad after.

I than traveled 60 miles to go see a sports physician i was refered to.After waiting about an hour i got to talk with him. He told me since this injury is from overuse theres no quick fix for it. I asked him for some cortisone but he rejected me real fast. He told me the only way this thing is gonna heal is by doing super light reps until i can build back up and is gonna require at least 4-6 weeks. He also told me that benching in the high 300’s at that powerlifting meet in march is pretty much never gonna happen and even told me to avoid Heavy weights forever.

So now i got a fat ass medical bill, a mildly retarded PT and a mean case of tricep tendonitis. Seriously guys, What should i do? In the next 3 months i have 2 powerlifting meets and 3 combines that all involve heavy benching. Any ideas at all?

Pt’s are not on the same level of serious weight-lifters and/or strongman/powerlifters…it’s a joke how different they view iron, stones, tires, etc…sorry bro…

I seem to remember reading an article, maybe by Dave Tate, defining the differences between hurt, injured, and fucked up. I guess you’ll have to decide which category you fall into, and how you’re going to deal with it.

First of all, you don’t want cortizone or any other steroid for a tendon injury. This is palliative treatment at best. Most chronic tendon injuries do not even have an inflammatory component- in fact the term “tendonitis” is a misnomer and is now considered archaic.

Anyway, an excellent rehab protocol for tendonopathy is eccentric loading. I recommend doing negatives daily (or most days of the week) with as much weight as you can tolerate without aggrovating the injury. Just remember that you’re training for rehab and not performance. Whip out the google search and do some reading on eccentrics for tendon injuries. I personally wouldn’t go back to the PT, but that’s up to your discretion of course.

[quote]jdavis2007 wrote:
Pt’s are not on the same level of serious weight-lifters and/or strongman/powerlifters…it’s a joke how different they view iron, stones, tires, etc…sorry bro…[/quote]

might want to ask on elitefts what you should do for your elbow.

personally band pistons helped me a lot I didn’t do much heavy work stayed above about 6-8reps, but with the pistons i did like 100 reps couple times a day with doubled mini’s. (had tendonitis from weighted chins and stuff).

Fatt Matt.
Coming from someone who “couldn’t bare to take professional advice and not lift for a couple of months, to rehab my elbows and thus turned a 3 month problem into a 12 month problem” suck it up and rehab your fuckin elbows!
Sorry to be rude but i’ve been down that track and when you realise you should have done the right thing to begin with but now it’s too late you’ll feel like a retard.
Your a student. You’ve only been lifting for 4 years. If you want to still be lifting in even 10 years time, trust me on this, do the right thing now.

[quote]stockzy wrote:
Fatt Matt.
Coming from someone who “couldn’t bare to take professional advice and not lift for a couple of months, to rehab my elbows and thus turned a 3 month problem into a 12 month problem” suck it up and rehab your fuckin elbows!
Sorry to be rude but i’ve been down that track and when you realise you should have done the right thing to begin with but now it’s too late you’ll feel like a retard.
Your a student. You’ve only been lifting for 4 years. If you want to still be lifting in even 10 years time, trust me on this, do the right thing now. [/quote]

I also agree on the negatives theres a great article on here about that and tendonitis.

i cant really add much too what others have said, but when i suffered triceps tendonitis, i did all of the above. But what certainly helped was superdoses of fish oils 12-20g a day, i was painless after 4 or 5 days, i followed the rehab course and im back lifting heavy and still consuming alot of fish oils

Get some ART, it should be fine along with some exercise modification, watching extension movements, making sure you train the antagonist ( biceps area) with something like hammer curls, and adding in close grip board presses from the 2-4 board region.

Pushdowns might be okay but start light with some higher reps.

The main thing is to get some ART. until the myofascial restrictions are eliminated, this will persist.

And I just saved you from sending this to elite, hahahaha. I answer questions there btw.

Also, prolotherapy could be effective, although I have never done it.

Tendinosis is a bitch, no doubt about it. But as a poster above pointed out, trying to ignore it could easily make a three month problem into a twelve month one. There is no quick fix.

ART can come pretty damn close to being a quick fix, though. I would definitely second tom63’s recommendation to give it a try. It proved immensely useful for a case of elbow tendinosis I had a year and a half ago. Try to find an ART provider who works with athletes (most do). Their experience with athletes also sets them apart from the vast majority of docs and PTs.

I had a doc tell me three years ago that I could never squat again; after nearly 9 mos of nagging knee pain (and no leg work during that period), he ordered an x-ray and told me I had chondromalacia and that my squatting days were over, most definitely, no dooubt.

In fact, the most I could do would be short runs on flat ground. No running stadiums. The elliptical would be alright he said. So I started using the elliptical; at first I felt pain then, too, but i thought at this point I have nothing to lose.

Within about two weeks the pain receded. I began eyeing the empty bar in the squat rack. Gradually, I began squatting; first with just the bar, then slowly adding weight, looking for the moment the pain would come back, and planning to back off at that poin. It never did, and I have been squatting regularly ever since.

I am sure plenty of others here have stories of useless PTs and docs on sports injuries. True, I have also had some excellent docs and PTs, but these have been few and far between. Locating one with sports experience, esp. with strength sports, can make a world of difference.

Also, prolotherapy could be effective, although I have never done it.[/quote] 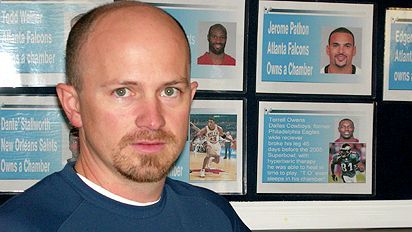 Fish: Treatment questioned for T.O. and other stars

Has this man dispensed medical treatment to Terrell Owens and other top athletes while practicing without a license? Mike Fish investigates.

definitly find a PT, with a serious sports background… someone who has worked with “athletes”, not just the “soccer mom’s”…thats the biggest problem I find with most…no “real” experience.