IOC votes to drop wrestling for 2020

IOC leaders dropped wrestling from the program for the 2020 Olympics on Tuesday, an official familiar with the decision told The Associated Press.

I never wrestled a day in my life and at first thought the same thing WTF? I always think of wrestling running and swimming when I think of the Olympics. Yet I have to admit I’ve never watched it, which is probably why it was dropped. Unfortunately today’s society likes quick knockouts and dramatic submissions, they may have to figure out a way to make it more action and drama. For the sake of all the wrestlers I hope they bring it back though.

Lol what a fucking joke. The Olympics will just continue to get gayer and more watered down by the pencil necked twinks who are running it.

Wrestling would literally be the second to last thing (right after Olympic lifting) I would ever remove from the Olympics.

If it were up to me the Olympics would be Oly lifting, “combat sport” things like wrestling, boxing, mma, judo, etc., powerlifting, strongman, track and field stuff, the running bullshit, swimming crap, gymnastics stuff, and some of the actual sports I guess as well.

What a travesty. I feel bad for all the kids wrestling who had olympic dreams who can’t do that now because fucking RACE WALKING was left in.

here is an article from flow wrestling. 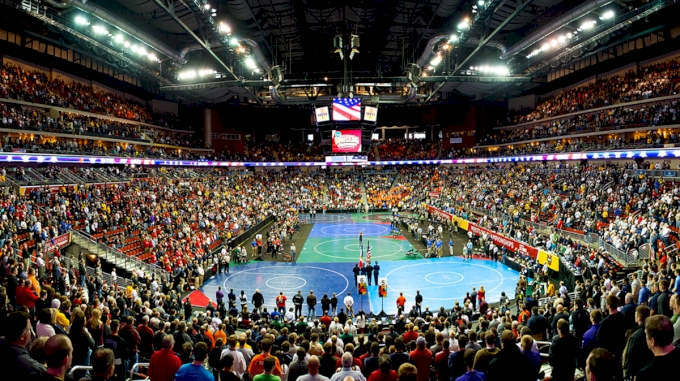 forget the kids in this country - or college aged kids who are training for 2014 right now.
what about the people in countries in eastern europe where this is their national sport
and this is what they do.

seriously - wtf so glad trampoline bouncing is in.

I got to get my olymipc chance NOW
Im 41 and nursing a neck with 3 fused vetebra , two busticated shoulders and a knee with a tree growing out of it.

[quote]FightinIrish26 wrote:
What a travesty. I feel bad for all the kids wrestling who had olympic dreams who can’t do that now because fucking RACE WALKING was left in.[/quote]
Worse yet, race walking (or synchronized swimming) weren’t even in the final four up for removal.

“Wrestling was voted out from a final group that also included modern pentathlon, taekwondo and field hockey, officials familiar with the vote told The Associated Press.
…
The board voted after reviewing a report by the IOC program commission report that analyzed 39 criteria, including television ratings, ticket sales, anti-doping policy and global participation and popularity.”

I find it hard to believe that, outside of college or high school, field hockey has consistently higher tv ratings and general popularity than wrestling.

Also from that article:

“Wrestling will now join seven other sports in applying for inclusion in 2020. The others are a combined bid from baseball and softball, karate, squash, roller sports, sport climbing, wakeboarding and wushu. They will be vying for a single opening in 2020.”

Yep. Roller sports, which would include roller derby and roller figure skating, could become Olympic sports while wrestling isn’t.

Actually I kinda like the trampoline other than the ‘men’ being so whiffly. And those water ballerinas probably put in the most actual training of any athlete in the world - like 50-60 hours per week.

I OD on Olympics but I hate the pro league sports in this format, TKD, Judo bored me to death as I never understood why there seem to be so little action, and non athletic things like sailing, shooting, archery

We need a combat sports Olympics, with real contact rules, since the IOC is dropping some sports and ruining others.

So, the Olympic Village is going to have Derby Girls now? International, Derby girls. I am thinking Suicide Girls with accents here.

What is the hands down easiest sport to get into the Olympics with?

Wow, I guess they are trying to reflect modern society. Only a matter of time until they replace weightlifting with competitive eating. Maybe darts can replace all track and field. It’s after all the Olympic ‘Games’.

I’ve pretty much lost my only reason for tuning in to the olympics. Crazy

I thought your profile pic was the reason to tune to the olympics.

[quote]devildog_jim wrote:
We need a combat sports Olympics, with real contact rules, since the IOC is dropping some sports and ruining others.[/quote]

Truth: People have no knowledge of the original games. Greek warriors did not train for floor dancing.

Do they still have curling in the winter games? Got to be the dumbest crap I have ever seen.

I guess FILA finally managed to smother their baby.

[quote]devildog_jim wrote:
We need a combat sports Olympics, with real contact rules, since the IOC is dropping some sports and ruining others.[/quote]

Truth: People have no knowledge of the original games. Greek warriors did not train for floor dancing.

Do they still have curling in the winter games? Got to be the dumbest crap I have ever seen. [/quote]

There is going to be a hell of a lot more violence involved in keeping the slums bottled up for the Summer Games than in any of the combat sports.

I hope to God karate never gets in. Competitive tournament has ruined karate and the way iit is taught.

Too much PC in the world of sports and combat sports need to maintian their purity.

[quote]Josann wrote:
Wasn’t running and wrestling the original sports anyway?[/quote]
Yeah around 700BC it was running, wrestling, and throwing.

But hey who gives a fuck about history or tradition right? Wrestling is just too macho for today’s Olympics. Fucking Olympic committee. I hope Alexander Karelin comes to each and every one of their houses and crushes them.

Utterly ridiculous. I can think of no single sport that captures the spirit of the Olympic Games more completely than wrestling. I mean what could be a more simple, direct form of human competition? The Games, and I would venture sports in general, were instituted as a surrogate for combat so the youth could display their prowess without the wholesale slaughter (although many individual competitors lost their lives in the ancient games).

So, the Olympic Village is going to have Derby Girls now? International, Derby girls. I am thinking Suicide Girls with accents here. [/quote]
Ha, that’s a special kind of calendar just waiting to happen.

What is the hands down easiest sport to get into the Olympics with?[/quote]
My first instinct was going to be equestrian dressage - prancing on a horse - since a well-trained horse is the one doing most of the work. Turns out that did make the list, ‘7 Easiest Olympic Events to Win a Medal In.’:

The 7 Easiest Olympic Events to Win a Medal In

Like many of you, I spent most of the past weekend elbow deep in a bag of Cheetos while watching the Olympics.

Anyhow, unless something gets resolved, it’s going to be an awkward 2016 games since wrestling’s still scheduled for competition.