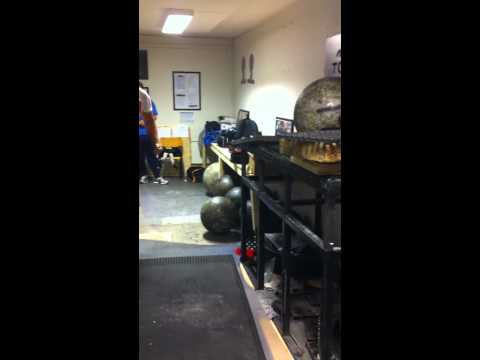 dude’s got a lot of passion

Damn, I can only move the 180kg stone a few inches off the ground. Kid’s a beast!

On a more constructive note: Notice how quickly he rolls the pill from an unfavorable position right up in his lap? Just goes to prove that working on your handling will help improve performance greatly (i.E. rolling it from hip down to knees and back up for reps).

pretty damn impressive! one of my friends just recently competed at teen nationals for strongman, he said the first place heavyweight had a max stone load of about 400 or something like that. kids these days are insane.

He does not even look that big.

he must be realllllly tall because thats the smallest 400+ stone ive ever seen.

how tall is he? That stone looks much smaller then that, and he looks really skinny to be handeling that much weight.

I’m sure he is tall if he is Norwegian vikings are crazy. Glad to be one

So basically take 90% of my max deadlift, put that same weight into a slippery ball, and then lift it up and set it on a platform. Yea… I probably couldn’t have rolled that across a parking lot when I was 17.

Very strong! How are his other lifts?

He turned 18 about a month ago. He is 201cm tall and 135kg. so yeah is is kinda big. Norwegian newspapers keep calling him a bear:P His goal is currently to win Norways strongest man by 2015

I cannot believe people were asking if he’s tall. Of course he’s going to be f**king tall. That’s clearly the deciding factor in him doing this with relatively little muscle mass: he has bodyweight on his side. If he was 5’6 and weighed 60kg I think the chances of him even moving that stone at all would be against him.

Damn imagine when this kid fills out…

Being tall can really be deceiving. He doesn’t look particularly well built because of his long limbs and the stone even looks small but it all makes sense when you realise he actually weighs 135KG; the muscle is just more evenly spread on a larger frame than a shorter man. Its always going to be an advantage overall in strongman to be taller as you can pack more muscle on that big frame. Hats off the guys who compete well at around 6 foot or even below as an event like atlas stones is even harder when you have to lift the stone higher up your body than a big tall dude.

His height does mean he can put on a large amount of muscle which as stated will help in his upcoming events. That is not to say being shorter is a huge disadvantage when you factor in the different points that cause someone to be physically stronger than the “average” person.

Good genetics come into play - a strong father and mother means that the child will have the ability to become quite strong, the points where tendon connects to bone and thus greater leverage, the length of the muscles, obviously the size of the person and one factor that is not always included (it is not a physical attribute) - mental mind set (the determination to be the best).

Now if we assume that many people are gifted enough to have one or two of these factors (even if you do not, the potential to become strong is still there - what I am getting at is it may well take more time to develop this strength) it means they can build large amounts of strength.

For those who have good genetics, good tendon to bone connections, ideal muscle length and correct size/height (for their sport/training) as well as mental attitude to want to be the best - you have someone who is going to be very good at certain sports/events. This 17/18 year old may have all these things - or he may not.
It’s interesting how different people have the ability to develop strength at different rates/be more adapted to certain sports.