Will These Show Up on Urine Test? 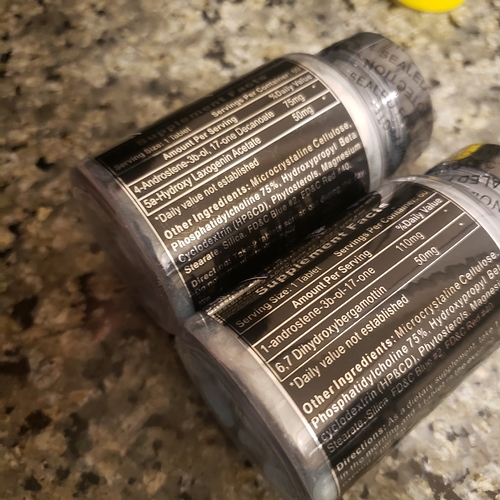 Help please.
Running this stack for a month to jump start my training… only catch, I compete in a tested powerlifting federation BUT I am not competing until January. Does anybody think I will pop for any of these via urine???

I don’t know. As they are orals they are usually out of your system pretty quickly(and so will any positive effects), and January is 4-5 months away.

Decanoate ester is quite long acting, but that’s usually with injectibles.

Dude your just going to have to risk the potential bad test results.
Have to wait for someone with the right expertise to chime in.

Hopefully. There are multiple untested powerlifting federations. I don’t see why you would use PEDs and compete tested. Pro football would be understandable, but I digress.

Thank you.
Any explanation to your response or elaboration??

I’ve never ran a stack. I’m only doing it this once cause I had a little hiatus from lifting. I only compete tested. I’m not going to continue to run anything after this cycle and a PCT is over. So thats why.

You’re describing a typical reason why competitors use PEDs. Using them is expressly forbidden for this purpose.

I’ve never ran a stack. I’m only doing it this once cause I had a little hiatus from lifting. I only compete tested.

Why do you only compete tested? Probably for the reason that you are natural as of now and want to go against other guys who you feel thru testing are also natural right? If you win 2nd place and the guy who wins first piss hot for steroid or prohormones you want him stripy of that title because it belongs to you.

Either compete untested or go about it the right way. Stop looking for short cuts. At the end of the day your morals and values are yours but how good would it really feel to cheat and win? Or cheat and not win?

Appreciate your input. I had taken tine off cause of injury, lifts took a hit, just wanted to give it a shot and then be done with it and stay natty. I know plenty of ppl who compete in tested federations and cycle off in time for meets. So do i feel like I’m cheating, just a little piece of me does but I’ll live cause I’m not running it month after month like some of the other competitors. But this isn’t a post of me asking for opinions about morals or what’s right… I’m asking for advice on the supps and their life cycle in urine.

Understood…again I’m running them for 30 and then I’m done.
So whats your advice on my initial question?-

So do i feel like I’m cheating, just a little piece of me does but I’ll live cause I’m not running it month after month like some of the other competitors. But this isn’t a post of me asking for opinions about morals or what’s right

So your rationalizing your cheating by what you think other people are doing. Using this mentality in life is not going to be beneficial.

No you didn’t exactly ask for opinions but you did ask if you could cheat without getting caught so you should expect to hear people’s opinions on that. If the post was a simple “how long are these supplements detectable in urine” maybe my response would have been different.

By the way I’m all for athletes using drugs to perform the best they can. I think the NFL and other major sports should all legalize PEDs. I just think it’s lame when people use them for tested sports when they have a untested version and then try to rationalize it like it’s not cheating because so and so is doing it probably or I had an accident and couldn’t go to the gym.

just wanted to give it a shot and then be done with it and stay natty.

So if you win and set PR’s in every lift, will you not be tempted to continue? It’s a slippery slope once you go that route and it’s so easy to rationalize your next dose.

Just go untested man. I went untested and its a decision I dont regret one bit. Dont be a jackass and compete tested.

And again, that’s forbidden. So you don’t understand. And I have no advice regarding your initial question, because its not even health or protocol related. Youre just looking for a good way to cheat. I think you need to prepare yourself for the reaction of your fellow competitors if you get popped, because they are going to be way more harsh towards you than just my random comments on a forum.

Do you use steroids? IF yes, in the USA? Under prescription or Dr supervised? OR at your own risk?

Get off your high horse about forbidden, which is quite hypocritical.

Lol, no, I’m not on a high horse. How about you drop the self-serving logic? The legality of steroids has nothing to do with cheating and breaking the rules of a competition that you’re choosing to enter. I can’t help the country I was born in, but in powerlifting, I can choose which federation to lift in.

None of those will show up on a drug test four months later. Two of them are just DHEA metabolites, one is basically grapefruit juice, and one is snake oil. They won’t show up unless you’re being tested by WADA. They also won’t do jack shit for your lifts, strength, or muscle growth. Next tine just give me the $90 you spent and I’ll yell at you over the phone to lift harder during a training session. It’ll be a better use of your money and I’ll use the $90 to buy some dbol for myself. Win-win.