Hi all, I have been lurking for awhile and thought some guys might identify with and benefit from my story. My apologies for the long first post, but I hope that it helps someone out there.

I’m 44 yo, 5’9” 198 lbs, and have been on HRT for 4 years. When I was younger, I was a US national team-level athlete, so I have always been very attuned to what is going on with my body. At 33, I made the big decision to put my career on hold and volunteered for the Army, then served several years in a combat unit before eventually being injured and discharged. I mention this only to say that I went through a number of years of very high physical and mental stress (which I loved).

Within a couple years of returning to normal life, I began to struggle with brain fog, low energy levels and poor quality, fragmented sleep, dramatically impacting my quality of life and ability to perform in my civilian career. My weight also began to drift up from my fighting weight of 175 (former competition weight was 158 at 6% BF). My GP sent me for a sleep study and it turned out that I have obstructive sleep apnea, which was easily controlled with an APAP device. My energy levels improved for awhile, then began to plummet again and I was really struggling.

In 2013, I decided to get aggressive with treatment options and visited a respected psychiatrist in my city to rule out depression, PTSD, etc. Over the course of about 10 visits, he ruled those both out and we also noted that I was lucky enough to have never suffered any TBIs. Great, right?

Around that same time, I was at an Army wedding and back around guys from my particular part of the community for the first time in years. As the night went on, a few of the guys with TBI issues started talking about how well they were responding to new treatments involving HGH. That opened the floodgates. Soon, almost half of the retired/separated guys admitted to being on some sort of HRT, with TRT being the most common denominator. The experience of going through a sort of “systems crash” after ETSing was nearly universal, but they were getting results, they felt better and their family lives were vastly improved.

I went home and talked to my doc, who ordered some basic labs. My total T at that point was 448 and free T was 11.6, so we didn’t take any immediate action. I worked out hard, cleaned up my diet and started meditating for about six months, but saw limited results. The next step was to visit an Anti-Aging Clinic that my doctor referred me to. That is where things began to get interesting.

The clinic doctor ran all of my bloodwork and decided that I was suffering from pre-diabetes and possibly adrenal fatigue. I was a little suspicious of both him and this diagnosis and insisted that we take a very conservative “one step at a time” approach. I did a six week course of hCG to drop weight fast, in addition to taking DHEA to boost my testosterone levels without full-on TRT. My T actually responded quite well, going from total 334 to 737 and free 8.5 to 15.6, and I dropped 20 lbs. However, despite a very controlled and restricted diet during that period, my A1C only dropped to 5.6.

This is where we began to experiment. Despite my cortisol levels looking okay, he really thought that adrenal fatigue might be an issue, so I started taking Cortef in addition to Metformin. The Cortef really did not sit well with me and caused a wildly irregular heart rate. I would be sitting and watching a movie after taking my dose and my HR would roller coaster between 45 and 120 in a matter of minutes. We had a major disagreement about this, but I eventually decided to refuse further treatment with Cortef. About a month later, we repeated my labs and my T was down again to about 378, despite still taking the DHEA, so I began using a compounded testosterone cream on my inner thighs twice daily (1/2 mg each dose).

The difference was dramatic and immediate. Within just 72 hours, my brain fog evaporated and I felt like I had my brain from ten years before back. After six weeks, my total T was 810 and free T was 22.9. At that point, we basically put things on cruise control and didn’t change anything for two years. Eventually, however, I tired of paying the clinic fees for no reason and my GP agreed to take over the T prescription for me last May using the same compounding pharmacy, etc. I feel lucky to have him – he freely admits to not being an expert on this, but he is willing to help and to confer with colleagues when needed to support me in living the best quality life that I can.

Unfortunately, late summer/early Fall last year I began to feel like crud again after my last refill. It was almost as though I’d never been on TRT. My sleep went down the toilet, my mood was terrible and I packed on 15 lbs without any change to my diet. On December 28th, my total T was 207 and free was 6.5. No wonder I felt terrible! My doctor ordered another refill for me and increased my T dosage to 1mg twice per day.

Since then, my mood has been pretty tempestuous and I have also seemed to puff up in the face, had some mild decrease in sexual performance and my weight has failed to drop despite working out with a trainer 3x per week, doing hard cardio a couple days per week and eating really clean. When I visited my doc this week, I was floored to hear that my total T is now 1500 and free T is >50!

I am now waiting for new, more comprehensive lab results, but my doctor volunteered that he’d have no problem prescribing an AI if my estradiol is high. He thinks that my T is definitely high, but is fine leaving me at this level if I feel good and suspects that my estrogen has simply gotten out of range. We also suspect that my previous testosterone refill (which ran out Jan. 1) may have been compounded wrong, so he has backed my daily regimen off to .75mg 2x per day.

Anyway, I will know more next week, but it has been quite an odyssey so far and I have tried everything in the book and out of the book to get back to 100%. I suspect that I’ll get back to total T in the 700-800 range and begin a low dose of Arimidex over the next couple of weeks.

Feel free to fire away with any health or treatment related questions. I am still learning as I go and the estrogen piece of this puzzle is new to me. I’ll post my new labs when I get them. 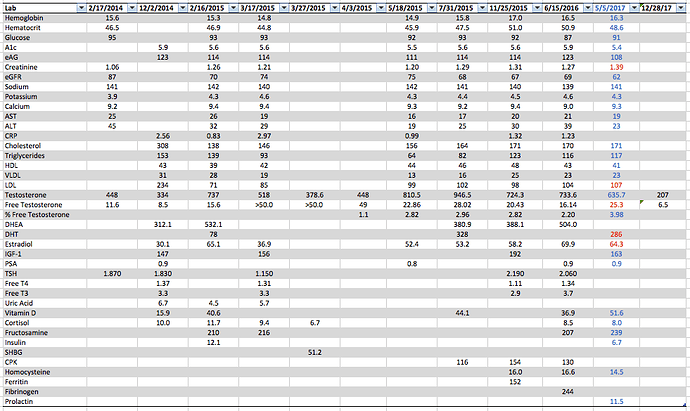 Thank you for your service and for sharing your story!

With regards to cortisol levels, what time of day were the labs drawn? A saliva test would really help evaluate your adrenal function better.

I would request the sensitive estradiol test next time. The standard estradiol test produces inaccurate results that are higher than they actually are. If you have trouble controlling estradiol with arimidex, injectables are always an option and you may covert less T to estrogen and have the flexibility of altering dosages and frequency which can help even further. Generally 20-30pg/mL is considered the sweet spot for E2, although Ksman suggests 22pg/mL is where most guys feel good. Everyone is different, some can tolerate more than others. It really depends on your symptoms. I would test your SHBG again by the way, it been about 3 years and it can help determine what protocol would work better for you.

You eGFR rate seems to be dropping and is now near the cut-off. I am not sure if that is typical for males your age, and what other factors are involved but I would do some heavy research into kidney function and continue to keep an eye on it.

Wow your labs are all over the place. Your E2 is insanely high, which might be some of the problem. I had a similar issue with e2 and placed on Arimadex 1/2 MG x 2 week. Felt a little better, however, not optimal by any means. Anyways, lab ranges are a good idea when posting labs because every lab (Quest) has different ranges. A complete metabolic panel is warranted. Good luck bud, most of us feel your pain, literally!

Did you only check your SHBG once over that entire 4 years?