Why Is Sub-Q More Effective?

Alright, so I was very skeptical about sub-Q working better than IM, as some claim. I usually have my wife give me my shots because I can’t seem to break that mental block of injecting myself (I’ve only done it successfully a few times).

Anyway, I decided to try sub Q and to my surprise, it is the easiest thing I have done and am now doing daily injections.

So my question is, why is sub-Q better? Dr. Crisler claims 20% more effective, and I am curious where the evidence for this is? I see how it can help with E levels being better spread out, but how would it increase T levels? I’ve done some searching and can’t seem to find any evidence of it’s improvement over IM.

I think it’s a major assumption to say it’s “better”, whatever that means. Some people like it, some don’t. I’ve never seen any evidence that would make it “better” though.

As I understood sub-q leads to more slow and sustained absorption. But seems that some people do not handle it well.
I started TRT 4 days ago with omnadren and Im doing daily sub-q. I was very hesitant whether not to start IM, but luckily I didnt.

Since the first injection I felt the action of the propinate so seems sub-q works well in my belly.

I see nothing scary about doing it except eventual swelling of the injection site, but the doctor advised me to press the site after injection and I haven’t had swelling yet. The hardest part in all the process is the filling of the syringe…

SQ isn’t more effective for me, it depends on who you ask. I hated SQ injections.

So the 20 percent more effective is questionable because if you read his study, it involves SubQ twice a week and IM once a week. Then he measured test levels at the trough. So for the IM injections it is double the time before the blood test.

I say if you like SubQ then do it. It likely won’t get you an actual 20 percent increase. Might be slightly less, but not by much.

Cristler’s study was a bit of BS and added confusion to the TRT world, and I believe he had to have known that.

Sub-Q aromitizes more estrogen than IM so it really isn’t better for most. @dextermorgan said he tried both with the same protocol and felt superior on IM.

That’s how I would describe it, it felt like the entire shot converted over to estrogen.

How do you know that?

I like IM better because I like some peaks. If you are someone that is having issues then sub-q is a great option. It’s basically a flat line. So much so that you don’t feel anything because you’re always at X level. I would highly recommend it to folks especially in the beginning when you aren’t used to testosterone and you’re paranoid that every different feeling means something is wrong (high E2). It gets you used to testosterone and then eventually you can try other protocols once you have a little time under your belt and aren’t so scared.

How do you know that?

The doctors and nurses at Defy all told me this when I asked.

There is a paper which looked into the T to E2 ratio when doing im vs subq and as far as i can remember there wasnt a difference.

This is supported by the fact that the ester isnt a substrate of the aromatase. And the ester isnt cleaved off until it difuses out of the fat after injection into subq.

Never read any evidence supporting that

@johann77 Interesting, will ask at Defy if they have any papers about this topic.

@marcus007 No, of course Im not and I don’t claim to be knowledgeable, but I’ve tried to find all related studies according to that. What I discovered is there are very few proper studies regarding IM vs SUB-q. Most info the doctors give is based on opinions regarding their patients, but you know there can be much more variables in this experience except the injection method

Probably true. Doctors in niche fields like TRT tend to give advice primarily based on what they have observed in their dozens or hundreds of patients, rather than rely on studies.

This one just came out very recently. T undec im vs subq

No difference in Pk of T, DHT or E2 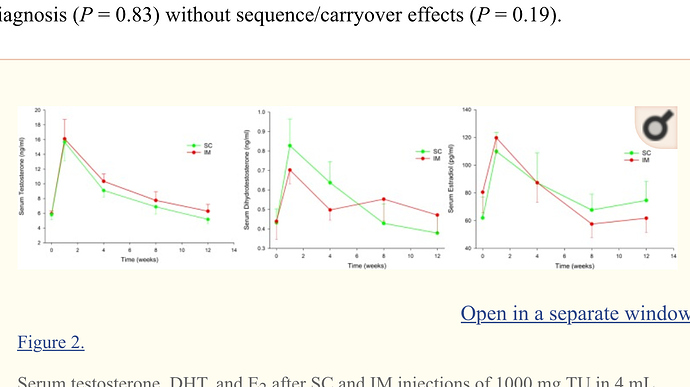 Pharmacokinetics and Acceptability of Subcutaneous Injection of Testosterone...

Can injectable testosterone undecanoate (TU) be administered effectively and acceptably by the subcutaneous (SC) route?To investigate the acceptability and pharmacokinetics (PK) of SC injection of TU.Randomized sequence, crossover clinical study of...

Just to add a little more information I’ve come across related to sub-q and IM to the discussion, this excerpt is from the testosterone deficiency guidelines. Are you familiar with this paper @johann77 and if yes, what are your thoughts?