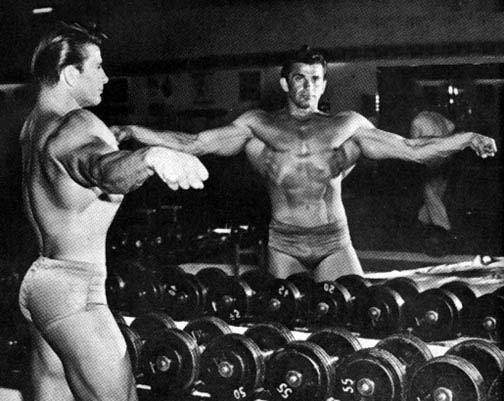 This started as an accidental hijack of another thread:

But raw eating definitely deserves a thread of its own.

Above pic is Armand Tanny, Mr. America and Mr. USA winner, and one of the best known raw food-eating bodybuilders. Jack LaLanne and many other lifters from the '50s also ate raw for a period.

Vince Gironda was a huge advocate of raw milk/cream and raw eggs, often having his bodybuilders drink them by the dozens. Strongman George Hackenschmidt also recommended raw foods. (Interestingly, he was writing about the importance of open-range animals eating a natural diet back in the early 1900s.)

Today, raw eggs are probably what people are most familiar with (I’m sure some lifters on this site use them.), but raw milk and raw meat eating is also still practiced by some lifters.

The benefits are, admittedly, not quite narrowed down and there’s just as much controversy as you’d expect with any non-traditional bodybuilding trend, with everything from “You won’t absorb or digest everything, so it’s a waste” to “You’ll lose 47 pounds from salmonella poisoning.”

It’s been an interest of mine ever since reading Muscle, Smoke, and Mirrors ( Strength Training, Bodybuilding & Online Supplement Store - T NATION ) and saw how it was a part of many old school guys’ diet. I’ve been experimenting on my own, starting with raw eggs a month or so ago, and recently incorporating some raw meat into my diet. It’s definitely interesting.

No digestive issues at all, and no noticeable side effects. I don’t “feel” any different, other than nice, deep, sound sleep when I have raw eggs before bed. I would say that I’m looking a little leaner, but I’ve also amped up my training recently, so there’s no way to legitimately say it was due to the diet tweak.

(From the original hijacked thread)[quote]worzel wrote:
I’m very interested in raw eating but as most of our meat is mass produced/processed I would be concerned with all sorts of shit coming into contact with it before it reached my mouth! Now if I could source my meat from a reputable source, knowing how the animal was reared and processed then I think this would be a fantastic way to up your health.

Did you eat a store bought steak or did you take the time to source it? Just curious because it takes some balls to eat raw meat in this day and age![/quote]
I can kinda relate to the worry, but really, I just picked up a thin cut pound of top round from the supermarket (a nice place, not the frozen foods section of some skeevy dollar store).

I had it over the course of two days and it was fine; tasted kinda like thick, cold roast beef. I did have to use a bunch of Frank’s Red Hot sauce because I wasn’t digging the taste of it plain. My girlfriend was mildly freaked out when I told her I decided to try raw meat, so I promised that I’d only get it from a quality butcher in town. No big deal.

Ideally, I’d only get organic, grass-fed beef and the highest quality stuff. Practically, though, I’ll probably be getting the best I can find while avoiding the obviously questionable stuff. I have also read that you get the most nutrients from raw foods that haven’t been frozen, so that could be a factor too.

My plan is to continue experimenting gradually, and when I get a chance, I’ll talk to some guys that’ve been doing it for a while (Muscle, Smoke, and Mirrors author Randy Roach, for example, has been a raw meat eater for years.)

I don’t want to sound like a raw guru or anything, especially since I’m basically thinking out loud here. Anyone have their own thoughts or experiences to add?

Most mornings, I wake up to 4 free-range raw eggs and 2 tablespoons of macadamia nut oil mixed in with my 2 scoops of Metabolic Drive. I do this out of conveniece and because it seems to be working well for me with physical growth.

Unfortunately, raw milk is illegal to sell in Arizona or else it would be a staple of my diet.

Raw beef isn’t something I’ve tried. I might test it out, but for me nothing tastes better than a medium rare New York strip.

I’m going to add a couple of raw eggs prior to sleeping for the next few nights and I will let you know if I notice any benefit.

I havent manned up and tried raw beef yet.

But I’m giving these raw eggs a fair shot, raw nuts and seeds are staples, and I’ll feast on sashimi as often as my budget affords.

Me thinks: Raw milk and eggs = good… also cream/pasture-butter. Possible to attain and practical with potential benefits that outweigh the risks.

me thinks: Raw meat —> risks outweigh benefits. Most likely, with quality (not ground) meat, you can sear the edges to kill most if not all germs and keep the inside mostly raw.

Other foods like veggies and such are worth a go to. FWIW, raw (and grass fed) animal products (like milk, cream and butter) have way more K2 and supposedly a decent amount of both omega 3 and enzymes (not sure what these ensymes do) as well.

i always wanted to try steak tartar. i am a big fan of mr. bean

If interested. Some should look up Lebanese Cuisine. Things like kafta, and kebbe naye and sawda are all raw beef. Personally, my family and I have eaten raw grass fed beef ever since I can remember with no noticeable side effects. This is not only my household, Im talking about my whole family and really most people of Lebanese heritage that I know. It is widely accepted as normal and quite healthy.

I use raw eggs post-workout now, 30 minutes after a whey shake. Seems like I recover a bit better from session to session, but too early to tell.

Interestingly, trichin infection increases from a few cases to many thousand around festivals in Asia where undercooked pork is part of the tradition…I haven’t heard of anyone eating raw pork willingly though, especially the farmers who breed them seem to shy away from eating pork in questionably regulated areas.

Eggs however are very safe, you COULD get salmonella, but the chance is about the same as for any other food, and the egg white is excellent protection in itself against microbes.

I eat everything as raw as I feel is safe given the source of the food.

And if a piece of meat “needs” to be cooked to more than medium-rare to be “safe”, I’ll skip it

I eat as many things raw as possible, including almost all vegetables and fruit. Somethings are simply just not meant to be raw to eat, like eggs and meat.

[quote]Mikael LS wrote:
I eat as many things raw as possible, including almost all vegetables and fruit. Somethings are simply just not meant to be raw to eat, like eggs and meat. [/quote]

What do you mean by “meant”. We are very much designed to eat raw meat, we’ve just done a good job of polluting and contaminating out meat sources. That’s what makes it iffy. Raw meat is readily bio-available, and actually easier on the digestive tract: a raw 1/2 beef patty would pass through your entire digestive system in about three hours, a 1/2 pound of “well done” beef can take days.

In the Philippines, we occasionally ate raw. Granted, it wasn’t like “off the bone, africa hunter’s raw” we only put salt on fish/beef and ate them with rice.

When sticking to a strict raw food diet, how could you ever get enough protein (I do not eat nuts or seeds)? I eat everything raw other than meat, it seems it would be both very hard to get the required protein and expensive. I would really like to try eating 100% raw for at least a few weeks.

spartiates: Yes, you keep saying that and yet i have not seen any single piece of proof coming from you. I believe i presented convincing evidence of mild cooking and increased bioavailability from meat a few weeks/months ago, a thread i remember you claiming the opposite in without presenting any data to back it up. It ended up with me and someone else debating the issue. Do I need to ignore you on this issue, or can you actually present a argument this time?

Eggs are downright poisonous and filled with digestive inhibitors when raw. Little known fact: the function of egg whites is to deter enzymatic digestion in order to keep it from spoiling. Unless you are a chicken embryo, i suggest heat treating your egg whites as it will will increase the biological value, not to mention save you from biotin deficiency.

seraphim: you can eat your meat raw if you really want to. You will need a very trustworthy butcher and ample supplies of immodium on hand. You can try out with steak tartar with egg yolk on it. Delicious.

I got salmonella from eating raw eggs. I was in and out of bed for a week with the shits, and I thought I would NEVER recover. I lost what was probably 10 solid pounds of muscle and looked like total shit afterwards. Never again.

As a nutrition major, I just don’t see that the risk of food-borne illness is worth it. Sure, you may never have a problem, but you could also have just ONE problem, ONE time - and it will kill you.

After the food prep courses and the microbiology courses, I’ve seen too much nasty shit to want to risk it. Now, within reason yes - in fact I love sushi, one of my favorite foods. But too much of the stuff is not prepared to the same stringent standards as sushi grade fish, so I wouldn’t do it.

However, to each his own - if you want to do it, go right ahead. But if you asked my (semi) professional opinion, I’d advise against it. 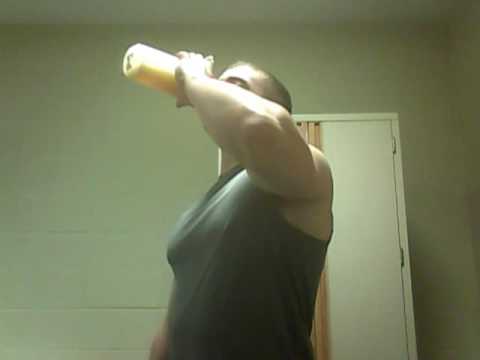 [quote]eremesu wrote:
i always wanted to try steak tartar. i am a big fan of mr. bean[/quote]

Sorry for jumping off topic, but Holy Crap, that skit was the 1st time I ever saw Mr. Bean. You either love him or hate him,… unfortunately for my friends and family, I love him -lol.

… and now back to the topic at hand…

go raw? I always use a condom,… not ready for little mighties running around just yet.

I’ve been drinking exclusively raw milk for 2 years now. I also have the occasional raw egg thrown into a shake of some kind (blended for consistency, but still). In that time, I’ve not been anywhere close to sick and I’ve actually aged backward (at 20, people mistook me for 40; at 31, some guess my age as 25 or so). Granted, I also get much more sleep, don’t smoke anymore, and the rest of my diet, while not raw, is almost exclusively organic and locally grown. I can’t credit the raw milk, etc., for everything, but I’m absolutely convinced it’s a major contributor. And for what it’s worth, my wife-who has never had a bad habit in her life-believes the raw milk has cleared up her skin and virtually eliminated her allergies.

I’ve also read Muscle, Smoke, and Mirrors, and was intrigued by the tales of raw meat eating. The taste-or lack thereof-more than the health concerns, is what keeps me from trying raw meat. I love my cooked ckicken and steak.

Raw fruits and vegetables? Of course, but nearly everyone eats some of those raw.

half dozen raw eggs a day. very convenient. put them in milk with something for flavor and its very simple to get down.

To the guy who said some things are not meant to be eaten raw. The burden of proof is on you.