I’m designing a t-shirt for myself so I need some opinions. It’s meant to resemble the “Men’s Restroom Dude”. Which do you guys think?

Or Restroom Guy “No words necessary”?

I vote for this one, or just the guy with no words.

Now that I think about it, I’d go with the no-words one first, but this is a close second.

A little off topic, but I was also just thinking about having motivating words spelled so they could be read in a mirror, like “Work Harder”, only the letters are backwards and read from right to left without the mirror.

I think it should say something like “t-men” the same way the bathrooms say men and women. Make it a word that obviously describes people who lift heavy. I think the blank one is good

Just say “T-Man” and have his arms raised.

The blank one is the best

nothing first. deadlift and gentleman tied for second.

deadlift by a landslide. rub the very thing most gym goers avoid right in their face.

Just wondering…but can you actually deadlift 495 lb? Because if you can’t, I’d go ahead and take a plate off of both sides. You’re going to look like a jackass if you walk around with a lot of weight across your chest but can’t even come close to lifting that much. But if you can, then go ahead and sport it. 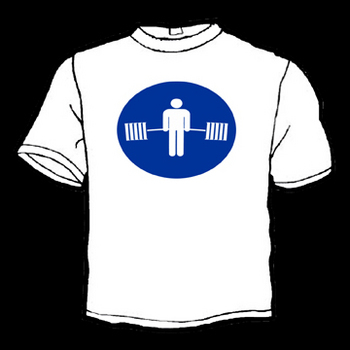 I agree with the majority keep it simple. My suggestion would be to use a circle though, seems to put it more in “men’s room door” context for me.

My vote is for the one with just the pic.

Another vote for just the pic.

Cool. Thanks for all the replies! I think I’m definitely going to go with the blank one on a Dark navy blue shirt. Though the oval around the restroom dude is something to consider too.

I’m going to put the template in by tonight.

[quote]GaMeOvEr305 wrote:
I like the blank and the deadlift one.

There fixed it for you.