What to Expect Coming Off 3 Year Blast & Cruise?

Ive been on trt for 3 years and getting tired of sticking 2 times a week. Had a neck injury last year and couldnt turn as far so had to start injecting in thighs. It’s been hit or miss hitting a nerve and im considering just stopping all together.
Kinda stuck between a rock and hard place because my test was well under 200 before trt. It’s gonna suck to see it plummet there or below once i stop.

So what is the best way to stop trt and kick start natural test, or is it too late now? Im 55 and feel like shit on trt so can’t imagine how bad going off is gonna be. I just don’t want to end up in a situation where id have to stop cold Turkey and not ween off gradually.

Appreciate any advice from those in the know.

I fair better using 29 gauge syringes. I rotate between quad and shoulder injections. After awhile you learn where to inject, mid quad is best for me but as I go towards the knee or the hips it’s starts getting painful.

A 200 Total T is not healthy and is not cardioprotective. It’s never too late to return to baseline levels, men have been on and off TRT over the course of years to father children, I don’t see any reason you can’t return to your previous levels.

Clomid is one way, HCG is another, but I stopped TRT cold turkey in 2019 and returned to baseline levels in 4.5 weeks all with no crash, your mileage may very.

What size syringes are you using?

18 to draw and 25 to inject. Every now and then it feels like i hit a nerve and back out a little bit. Im only using one inch long needles. Can’t imagine inch and half.

The 25 gauges hurt, the 27 gauges were not as bad but still some pain, but the 29 gauges are painless. It sounds like 25’s don’t agree with you, how about give 29’s a try before throwing in the towel.

The insulin syringes are half inch, big different.

Can’t imagine inch and half.

I started out using 18 gauge 1.5 inch harpoons, OMG where these painful!

I was told 25 was smallest i could use because test is oil based and wouldn’t flow through needle. Dr also said need 1 1/2" to get intramuscular.
Id much rather use insulin needle if it would work.

It’s slow but I use 30g 1/2” insulin syringes (one piece) and inject in the delt where the skin is thin. It’s easy to get to the muscle there with a 1/2” needle.

Takes about a minute to draw 0.3ml with that small. Not terrible.

Ventroglute and you wont feel it. No nerves to hit. Im on EOD. All is well

Nobody mentioned cream? Just go on scrotal cream and you’ll be fine without the need for injections.

If you feel like shit on TRT, you may have been dialed in wrong. If you keep your estrogen in range, you’re not supposed to feel any discomfort.

You may also consider adding HCG. On high dosage HCG, I feel like shit. However, in small amounts it’s amazing.

If your levels were sub 200 to start with, they will maybe be 70% of that after a year of (since you’ve been on for so long). This will lead to more than just a little muscle loss. You may risk bone loss, early dementia, heart problems, etc.

Use insulin pins, you already use a different draw needle (Which is the way to go IMO). Delts work fine, you probably just need to use different areas of the thigh. Some spots on my quads are sensitive, some I feel nothing, you have to poke around for a while and map it out. I’m using 27 ga 1/2 inch, they work fine. Actually shallow IM where I inject, not that it matters because plenty of people inject sub-Q with good success.

Ventrogluteal, 25g is painless and you won’t have to turn your head much. Insulin pins in the delts (which is all I’ve done for the last five months) are easy and painless, again no awkward craning of your injured neck. Quitting because you don’t like pinning isn’t logical. You would rather have the male sexual hormones of an 80 year old than find some easier pin sites? You can totally do it.

Also, you say you feel like shit currently. Describe it if you would. It might be fixable.

I just picked up some insulin 1/2" 29ga and they had a few regular 27ga units. I just tried 27ga and it wasnt that bad. The draw was pretty long but much more manageable. Thank you.

Maybe feel like shit isnt the right word. I dont feel like superman. When first talked to doc about it he said I would feel like superman on just regular trt 100mg a week. At the time I was doing 500 sometimes 600 a week. My first week on my trainer said to take an estrogen blocker. I took half he suggested and it tanked my estrogen. Pains all over. Took about a week or two to get over that. So I figured my estrogen wasnt that sensitive. Never used a blocker again.
Due to certain restraints in keeping up with my higher dosages I started to ween down to what my new doc would prescribe which is 200mg a week. So now ive been working around 200-250 a week and my test is still pretty high around 800-1100.
You would think i could be a porn star. NOPE! I had radiation burns that pretty much fried the gonads. Even on trt and viagra its maybe 3/4 hard at best. stamina aint there and its just a shitty feeling. Im 55 and should have more drive and stamina than this. So thats my story in a nutshell.
The reason I was thinking of going off trt was the pinning and also thinking ahead what if shit really hits the fan and I cant get any more trt? How bad would the crash be? So im weighing options and probably over thinking things too much, but thought I would ask here first and get some feedback. I hope the 1/2" pin works and can keep up my levels because that was very very manageable. Mucho thanks to all you brothers.

Ventrogluteal, 25g is painless and you won’t have to turn your head much. Insulin pins in the delts (which is all I’ve done for the last five months) are easy and painless, again no awkward craning of your injured neck. Quitting because you don’t like pinning isn’t logical. You would rather have the male sexual hormones of an 80 year old than find some easier pin sites? You can totally do it.

Also, you say you feel like shit currently. Describe it if you would. It might be fixable.

Post your latest blood work on here (identifying information blacked out). Maybe there’s something in there that’ll explain how you feel. 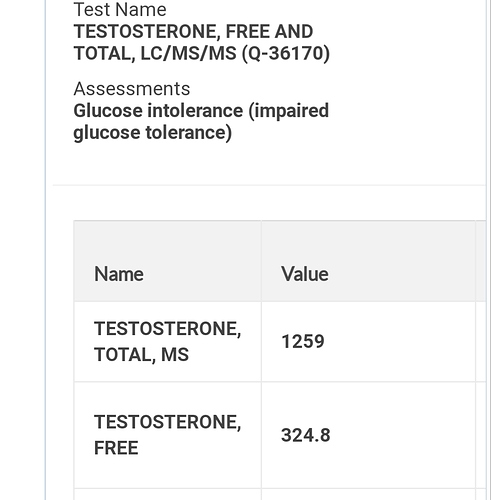 E2, SHBG, and ranges for testosterone?

I’ll say if pinning is the big deal, to try sub Q. I think it isn’t as optimal, but pinning EOD with small amounts is doable and almost pain free ime.

If running out is a concern, get some ugl test for cheap, and keep a year or more supply. It costs about 500 to buy 3 years of trt level amounts of test if it is ugl.

Under Ground Lab. Not from a prescription. Stuff you buy at the gym, online.

Gotcha. I had a nice source but they were based out of asia and with everything going on right now Im not comfortable getting anything from over there.
Ill see how these insulin pins work and try to order online labs in a month and see where everything is at. Thanks for all the help