What is this Lump in Test Prop Bottle? 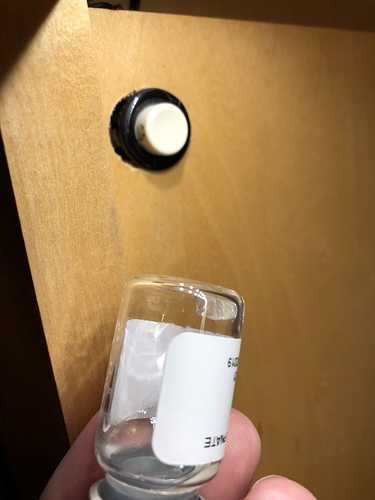 Anybody know what this lump is in the bottle of my testosterone bottle? Test Prop in grape seed oil. I assume it’s the oil but not sure why it’s there, what this means for the dose, and if it’s still good to use.

Edit: Research said it was the T from being too cold. I obviously didn’t put it in the fridge. Should I just run it under some hot water and keep pinning?

Looks like crashed gear.
Aldo looks like you have hardly any oil left in that vial. Just chuck it and pop a new one. Trying to reconstitute it would lead me to believe you will have some really strong oil with as little that is left.

Typically if there’s enough oil in there, you can heat up a cup of water in the micro and place the vial in there for a minute or so and see if the crystals dissolve.

More than likely it may have been overdosed. I had one vial of long ester that did that. Warmed it up in hot water and was good to go.

But I’d go with zeek1414 advice and chuck it. Not much in there anyway.

I’m with you zeek, not really much point trying to reconstitute it because there isn’t much oil left.

Also test prop from memory has a high melting point around 120 degrees Celsius. Test e would be easy, you could do it at 35 deg Celsius, in hot tap water. Boiling water is 100 deg Celsius, so you need more heat, something like a hot plate, and a pan. Or you could do it inside an oven. Either way you would need to vent the vial with a clean needle to prevent the air inside from expanding with the heat and potentially exploding the vial.

Thank you. Will chuck it. Have plenty other anyways.

Do you get really cold winters? Or keep your gear in a fridge? That might cause it to crash. Also it could be due to the brewer not using enough benzyl benzoate in the solution, or too high a concentration of test/ml. 100mg/ml is the usual dose for prop.

It was made a couple months ago so did not have to deal with winter. I do not store it in the fridge. Got it from a pharmacy so doubt the benzyl would be off. It is 200mg/mL. Never thought that would be considered a high concentration.

I don’t know that I’ve ever seen test prop made that concentrated. 200mg/ml?

Anyone else seen this high concentration of test prop?

I use it for trt and inject about 60mg EOD. At that dose it’s not painful at all. I’ve gone through probably 3 bottles with no problems and the 4th was that one ^. If it happens with the next bottle I’ll see about getting a lower concentration. Thanks everybody