What is the Future of Bodybuilding?

I thought this would make an interesting topic. Is the future to be found in history? Where to go further when things have advanced to the current level? What next? Is health a matter of concern? How to reach a larger audience (if it’s even interesting)?

Mr. Olympia in Orlando was packed, they brought the Ms. Olympia back, they have the men’s classic, men’s physique, wheelchair bodybuilding, women’s fitness, bikini, and a new women’s wellness competition…they even expanded to judo, strongman, arm wrestling, etc

bodybuilding will never be mainstream, but it’s not going away either

Maybe it has something to do with social media?

Someone with a good physique can make a living off of social media and merchandise sales, without ever having to enter a contest. And if they do decide to enter a contest, it just provides more content for the channel… Prepping for X. As long as you connect with an audience and can be entertaining, you don’t even have to be the best. Plus you get to bypass publishers and TV networks, who are no longer gatekeepers.

I would not be surprised if this greater attention on social media spills over into better attendance at live events, especially as the number of events with lower bars for entry starts to increase.

Imagine the true genetic freaks standing out, with a near classic physique look. The biggest mass freaks of today must meet many obstacles in daily life (is wiping your butt even possible?).

Is the future to hold less anabolic steroids?

I hope so, I’d start following bodybuilding again if this became the case.

How about classic physique becoming the future peak division of bodybuilding?

If the public would support a tested show much like the Olympics are tested, that is a possibility going forward. I don’t see those currently interested in watching bodybuilding too exited to watch a much less impressive level of muscular development that natural men would provide.

Surely you don’t believe the classic and physique competitors are steroid free.

And if they are successful with drug tested shows, most would see guys in the gym more impressive than the competitors.

I am afraid we are left with “bring on the freaks!” …until it dies due to public pressure. But it is such a small number of bodybuilders that die, so maybe the public will never notice.

Remember when they tried drug testing the Olympia in 1990 and five out of the twenty competitors failed the test (Berry DeMey, Mohamed Benaziza, J.J.Marsh, Van Walcott Smith and Vince Comerford)?
Also, the remaining guys all looked off. 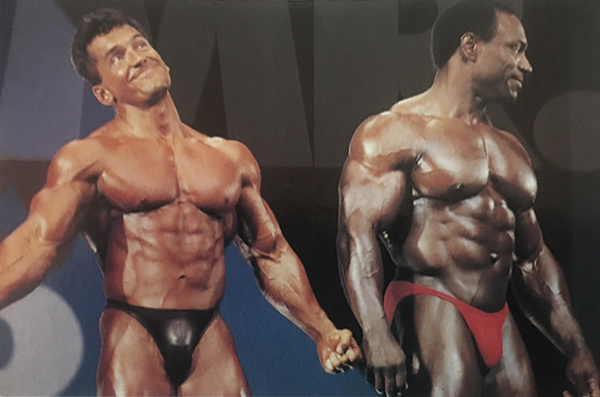 Also, that year they tested the Arnold Classic, and the result was even worst; Shawn Ray, the winner, was disqualified, but because the drug tests didn’t come out until four days after the contest, so he was awarded the victory onstage and later had to return the medal and $60,000 prize money to new winner, Mike Ashley.
This is why the Olympia tested three days before the contest.

A culture that kills people early? Um, have you heard of American football?

I also think it’s worth mentioning that Rhoden’s death is not anything close to an anomaly in the sport, it’s not a new thing. He just happens to have a higher profile than many of the other dudes that have died early over the years. Literally every single year, for literally decades, bodybuilders have died young.

There is nothing thought provoking here because there’s nothing new here. His death doesn’t move the needle, at all.

Imagine the true genetic freaks standing out, with a near classic physique look.

They’ll make their money outside of competition, through social media and other outlets. Meanwhile, the Olympia will largely stay the same. Classic physique is a cool division, and I agree that the aesthetic presented there is more pleasing. But the Open division isn’t going away.

Bodybuilding, as a competitive sport, is a niche that I don’t see changing in significant ways anytime soon at the highest level, because the guys that you are talking about have better ways to make money than stepping on stage today.

Yes, its a interesting topic and now a day health is a concern

Oh, I just remembered why drug testing was ended; in 2001 at the Olympia, runner up Jay Cutler tested positive for diuretics and threatened legal action to have the disqualification overturned. Apparently the IFBB weren’t following IOC procedures and probably would have lost a legal battle.