Weight Training for Women: Not Quite the Same as Men

6 Tips For Female Muscle and Strength

Women have different advantages and disadvantages than men in the gym. Here’s how they can tweak their workouts to get even better results.

Here are the general guidelines for women, tailored to the female body. I’ve also provided a sample workout for women so you can see how these guidelines are used.

Research shows that women can generally do more reps at a given intensity than men. So, it’s reasonable to say that women should generally perform more reps per set than men. However, this can lead to using very light weights for endless reps.

The weight you use on each set is determined by the number of reps you’re doing. Both women and men should choose a load that leaves them unable to perform any more than indicated on the workout program, but without cheating by using momentum.

But, since women have greater muscle endurance than men when using light to medium loads (2), they can benefit from doing an additional set. So, if a generic workout program calls for 3 sets of 8-12 reps, women will generally get better results by adding a fourth set.

2. Women don’t need as much rest between sets.

Women recover faster after a set than men because they’re less fatigable (3). Therefore, women don’t need as much rest between sets as men. This is why many women prefer faster-paced workouts like tri-sets and circuits.

Tri-sets are especially great for women because they allow them to keep moving, which maximizes work while still getting ample rest between sets hitting the same muscle group – important for getting the most out of each set.

3. Women can train their upper bodies more often than men.

For example, one study of males and females involved performing the bench press three times per week for five sets at 50% to 100% of perceived five-rep max (5RM). After the program, the subjects, on three consecutive weeks, participated in two testing sessions per week: baseline session and recovery session. During the testing sessions, subjects performed an estimated 1RM bench press while resting during a 4-hour, 24-hour, or 48-hour recovery period.

Females had no differences in muscle strength, regardless of recovery time, while the males had decreases in estimated 1RM at the 4-hour and 24-hour recovery times. (4)

What does this mean in practical terms? Women can hit their upper-body lifts more often throughout the week than men. So, if a woman wants to increase her numbers on a certain upper-body lift, she can hit that lift three times per week. (Men should stick to twice per week.)

The same applies to those looking to increase the size of certain upper-body muscles. Women who want bigger shoulders can hit them hard three times per week, while men should train shoulders hard twice per week.

4. Women should do fewer plyometric exercises.

Female bodies use less of the stretch-shortening cycle when it comes to upper-body lifting, which makes them less efficient, slower, and possibly more at risk of injury from explosive plyometric exercises.

In short, women are better off doing less plyometric volume than men. A simple way to apply this in pre-written workout programs is for women to do one less set than men of jumping, bounding, hopping exercises, or explosive upper-body lifts.

5. Women can get more from less sprinting.

A study involving male and female soccer players found that men have a superior ability to recover between sprints (10). Males had less drop-off in their sprint speed between subsequent sprints than women.

So, women would do best with fewer rounds of sprints than men in a given workout. Women can do a few extra sets of strength work instead since it’ll likely benefit them more anyway.

Females need to emphasize hamstring-oriented exercises like leaning lunges and RDL lunges. Why? Because women are more quad-dominant than men (11), and they tend to have weaker hamstrings (12), making them more prone to knee injury (13,14).

This doesn’t just mean going bonkers on the RDLs, 45-degree hip extensions, and other exercises that hit your glutes and hams in their lengthened range. It means incorporating some knee flexion exercises, such as machine leg curls and stability-ball leg curls two to three times per week. And anyone trying to build or strengthen hamstrings will need more than one exercise for complete development. 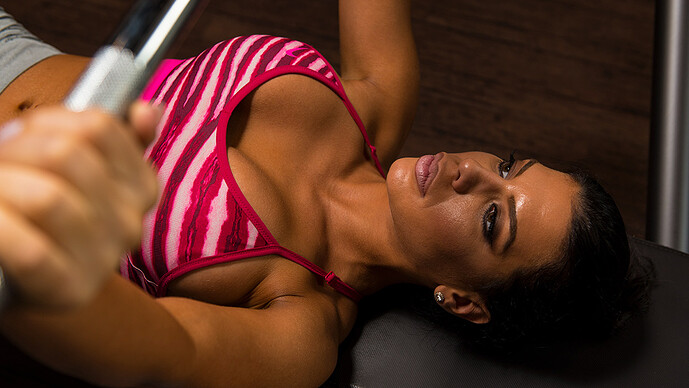 Here’s what a total-body workout for women might look like. This can be done in 60 minutes or less, including a warm-up.

For these tri-sets, perform all reps of an exercise before moving to the next one. Rest no more than 30 seconds between each exercise. Once you’ve completed all three exercises, rest 1 to 2 minutes. Then do the next round.

Thank you for explaining this so well. You mentioned that women can work the same areas 3 days per week. To utilize your sample workout for 3 days per week, would you use a different lift to target the same muscle for days 2 and 3 for each movement?

In addition to what NT said above ^, I would say yes to finding 3 different (but similar) movements to stimulate each muscle. Barbell Squats 3x a week is a bit much, but doing BB Squats, Zercher Squats, and Goblet Squats in one week seems pretty reasonable.

I think I’ve got a better standard work out that most women would do better with:
3 Sets, 5 reps - Bench Press (1.5 - 3 min rest between sets)
3 Sets, 5 Reps - Barbell Back Squat (1.5 - 3 min rest between sets)
3 Sets, 5 Reps - OH Press (Alternate with Bench Press if time is an issue)
2 Sets, 5 Reps - Deadlifts
3 sets of Chinups (alternate with Dips each workout) Use assistance as needed.
I know this seems kinda “out there” and crazy and of course it misses all that amazing “plank” work but who knows maybe it could do some good

You should write an article detailing your methods.

Sorry was just trying to be funny.

I think Rippetoe has MORE than covered it

Yikes. Good luck with that.

Thank you so much for your kind words! I’m so glad this article resonated with you.

You could do this same workout twice or three times per week. Or, if you get bored easily, you could do what you’re suggesting and choose differs exercises for each muscle group.

I really do appreciate it! Thank you!

I love the sarcasm because you know many lifters who think the barbell is the miracle tool, and the cure for everything from the common cold to leprosy.