Silly question I assume and I hope I don’t get roasted for doing roids and not understanding this fully… Anyways…
Somedsys I wake up toned as anything, face looking sharp and body looking good. Other days I wake up, double chin, puffy face and barely seeing my abs. I’m on 100mg tren a ED and 125mg test every 2 days. Take oral winny everyday also. Could this just be dehydration? Eating too late? Water? My weight doesn’t fluctuate too much.

Somedsys I wake up toned as anything, face looking sharp and body looking good. Other days I wake up, double chin, puffy face and barely seeing my abs.

How has lower dosages of Tren in your past cycles affected your bloat? What about winny in the past?

Who knows what it might be, but knowing your past cycles and issues with bloat could help.

When I get dehydrated my body looks like it’s trying to preserve water and I look bloated. Sort of the opposite of what you’d think. You should be drinking water non stop if you’re taking Winstrol.

You know how dangerous a tren/winny combo is right? ESP at these doses. Get a lipid panel done, chances are (unless you’re a generic anomaly) they’ll be beyond fucked. Then there’s the proarrythmiac, lipid oxidization including, directly cardiotoxic effects (Cardiomyocyte hypertrophy, effect regarding arterial stiffening) of these drugs. People tell me “but winny only mildly effects the lipids of some”… this is an extreme exception from the norm, literature shows at a mere 5mg daily ldl increases by 30-40% and hdl decreases by 30-40 percent, hdl subtraction hdl-2 decreases by 80-90 percent on average. These effects aren’t directly correlated with dosage, but if 5mg does this, other AAS are known to have a directly dose dependent effect on the lipid profile… imagine what 50mg daily AND stupid doses of tren (that you don’t need at 5’9+ and 80kg and never need as a recreational, casual user)

Please mate, take some semblance of harm minimization. You said you’re first tren cycle was 25mg daily, why not just go to 50mg daily? That’s about the max any gym rat will ever need if they decide to use tren (and even this dosage is capable of inducing quite a bit of harm)… if you have to use winny (which… why, it’ll predispose you to musculoskeletal injury, potentially make you’re joints feel like they’ve got sand entrenched between one another, trash you’re lipids… it really is a harsh drug)

The problem is, from contributing within you’re previous threads… I really don’t think you comprehend/ are aware the risks of the actions entail. If you’re going to do this you need to be aware of the very real possibility of not making it to 50-60, even less if you continually run these types of cycles.

I’d legitimately (for whatever duration you’re cycle is) rather smoke a packet of cigarettes daily+ Drink a six pack daily, it’d still be slightly healthier (I can explain as to why if one wishes for an explanation) (Keep in mind this is my opinion).

Also the effect (water retention and whatnot) may be (if only using trt dose) in part due to these drugs effects on electrolyte balance (indirect and direct), adrenals, glucose tolerance/insulin sensitivity etc

Thank you for the concerns unreal I have dropped the winstrol now and back to 50mg tren daily. Still suffering from bloating, on prescribed trt test so I know that’s legit stuff (375mg test e) a week and on a good source of tren. By no means do I want to be massive just a nice athletic shape and ripped. My body hasn’t been ripped for a while now as I’m always bloated maybe loads of water? I don’t know. What you guys recommend.
Diet is good and varied.
Sleep is horrible. I have ordered some melatonin from the US to help.
Excuse the messy room.!

Insomnia is a side effect typically associated with tren, however all AAS can induce this, likely due to upregulation of the sympathetic nervous system. Some medication, yoga helps. Melatonin is a good one

If on 19-Nors and no SSRI/SNRI etc, 5-HTP supplementation may be useful to counteract the serotonin depletion that occurs with these compounds. L - tyrosine could help with dopaminergic effects of 19-Nors… but is also used within the synthesis of adrenaline/norepinephrine… something of which would further stimulate the sympathetic nervous system sooo… not saying “take 5-HTP” just putting it out there

Melatonin is good stuff, be careful though as over time you’ll find you have trouble sleeping without it… that being said a dependence to melatonin isn’t the worst thing in the world, taking benzodiazepines / z-hypnotic drugs on a nightly basis would be 9381819299183828x worse

stuff (375mg test e) a week and on a good source of tren. By no means do I want to be massive just a nice athletic shape and ripped

Btw if this is all you want you don’t need tren. An athletic body (say like a swimmer) can be achieved naturally with cardio, diet and calisthenics/weight training. An athletic, RIPPED body can be achieved with the above with more of an emphasis on HIIT. An athletic, shredded body with size requires juice… unless you’re willing to put down say 10-15 years of dedicated training… but even then you don’t need tren. Some test/EQ or something can easily get that job done, don’t reccomend/condone gear use though, that’s a choice for only the individual (you) themself to make

Thanks for the reply unreal. It’s something I know I’ll always be on Trt as I do have low test. In my teens I drank a lot of beer. Mainly down to depressing I assume but that’s only self diagnosed. Believe I ruined my test levels. I started going gym at age 21 and noticed I made very little gains and suffered from doms a lot. Checked out bloods and I was boarding low test. Don’t mean to make this a transformation thread as I don’t think I’m anywhere near where I want to be to even posted a before and after. But this is me about 4 month ago (please note I did go gym before but stopped for 2 years, and stopped all test, even prescribed trt, was in a bad place mentally) . I take that being on trt for life I’d like to experiment with compounds knowing I don’t need a PCT and just being kind of sensible with everything. Obviously don’t want to fk myself up, that’s why I’m here haha. But I don’t think I could get where I want naturally with the T levels I had. 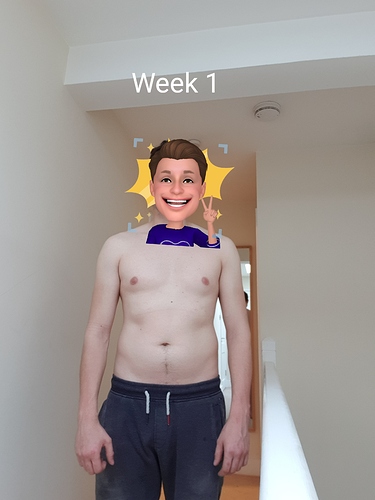 When you say low T… how low are we talking here?

Nvm you said you were prescribed trt

In you’re before picture, you aren’t big or muscular by any means… BUT for a sedentary individual who hasn’t been to gym in 2 years + low T… not bad at all

When I first got tested, age 21, it was 10nmol, range between 8 and 31,
Changed life style for 6 months, still 21, test came back at 12nmol.
Looked into trt age 22, got into gym for a solid 5 months and gave up. Stopped all test and gym and let myself rot. Felt bad but didn’t know any better as my prescriber only cares about money. Started back up age 22 with a blast and then went back down to trt. Stopped gym but stayed on trt. Dates and months may be a little off but you get the idea