Warning: Get Out of Stocks Now 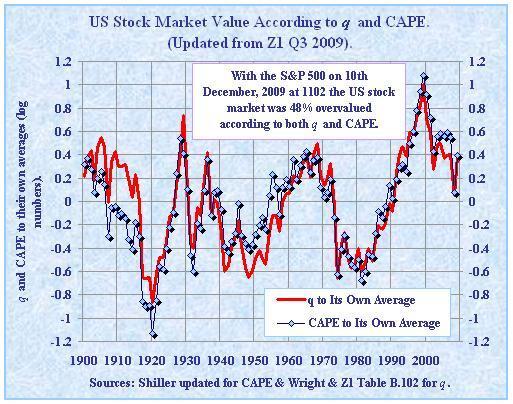 The market might rise from here, but the odds get progressively worse.

This is where I get the Q chart.

The S&P has actually risen by about 10% since the data was compiled, making the market even more vulnerable. I would guess that 1100 now will be 400 in a couple of years.

Long term I believe you are utterly right.

Where there is difficulty is that very many investors do not view stocks as having value derived from their expected future earnings over time, but rather respective to what they guess they will sell for some time fairly shortly down the road.

With the buyer also not viewing the stock value as being derived from their expected future earnings over time, but likewise for what he thinks they will sell for some time fairly shortly down the road from his purchase date.

My father, in the context of why postage stamps and other intrinsically worthless collectibles can sometimes reach the sky in their market value, referred to this as the “Greater Fool” theory.

In other words, while it’s true that a given postage stamp really will not give you pleasure worth anything like say $50,000 from being able to look at it or hold it in your hand, etc, and produces no income or anything of value at all, the person buying it for that price does so because he believes a greater fool will come along and pay him say $60K for it.

Of course, eventually the chain of fools ends, and there is a crash in prices, but the cycle eventually repeats.

Similarly, while we can see from your graph that indeed a Q ratio over 0.4 shows overvaluation, in some instances, e.g. let’s say an indexed stock fund purchased in 1995, there was still 5 years worth of greater fools that would come along.

So even though the stock was overvalued in terms of its earning potentials over time, from the perspective of someone valuing stock for what he thinks it will sell for shortly down the road, the buyer might disagree with you and claim that his experience proved your advice to be awful.

Note, I do not mean that I consider the advice awful. I look at it as being similar to advising a person that it is foolish to bet even money that, say, a coin will show heads three times out of three; and upon his being lucky him claiming that your advice was bad.

Our entire economy is based on 0% interest rates. We either keep it up and head into hyperinflation or we raise interests rates to 15-20% and kill every buisness we just saved.

The stock market is also driven by the Commercial real estate bubble, which is set to collapse q2-q3 of this year.

I think both of you are correct. What we’re seeing is another bubble (a reflated one at that) where everyone buys on the premise that someone else will come along and keep the game going. But then something pops the bubble, and as you point out John, its commercial real estate.

0% or near also means that there is no return on savings. BUT: what our Federal-istas forget is that we are not restricted to saving IN DOLLARS. Yet Uncle Sam needs our savings to pay the interest on the debt. Either interest rates must rise to get us to return to dollars or they have to go hog wild with the money creation. They are trapped as either one crashes the economy.

There is a difference between investing which is long term financial planning and trading which is short term price arbitrage.

There is still money to be made by trading if one can get into a favorable trade position.

The key is knowing how commodity prices affect producers and consumers and trying to predict which way certain commodity prices will go and how they will affect both the consumer and producer. I have found this strategy to be the easiest to follow with a higher probability of a pay out.

For what is is worth commodity prices in general will be increasing in terms of US dollars so look to make money on producers who export these commodities overseas. I would short the companies (especially domestically) that consume these commodities.

Long term (in the next 5 - 10 years) it is best to get your assets out of US dollars by investing in foreign stocks that pay dividends. This strategy has a three fold income generating benefit:

The emerging BRIC countries are seen as a great investment though in the short term China is slated to have a short pull back as prices rise due to their over saturation of US dollar debt holdings (remember, commodity prices will rise in US dollars due to inflationary policies in the US).

I think that there are certain rules which will always hold: