Video: "Is Post Finasteride Syndrome Real? Diagnosing and Reversing It"

His article with all the studies he’s referencing: 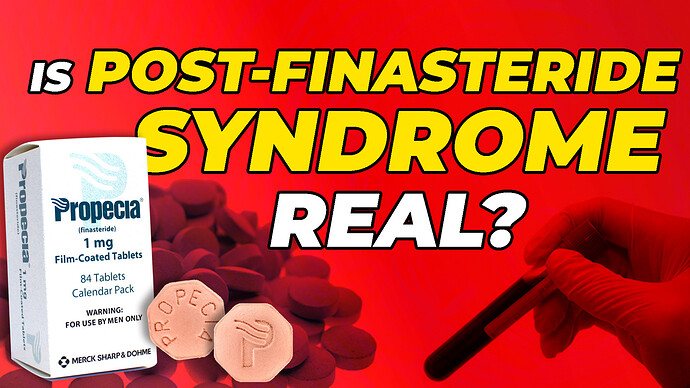 Is Post Finasteride Syndrome Real? | How To Diagnose And Reverse It

Post Finasteride Syndrome can be manually corrected by interpreting blood work and implementing an appropriate lifestyle and/or pharmacological protocol.

Very controversial topic in this forum. Plentiful in opinions, short on facts. Personally, I believe it’s become the boogeyman for a bucket list of sexual problems. It’s easy to point to a little blue pill you took 10 years ago than to look for other causes.

The data does support that finasteride does have sexual side-effects for guys that are not on TRT while you are using it. This is to be expected because you are messing with a hormone (DHT) that is very important for sexual function. When you are on TRT, your DHT levels tend to go out of the normal range and finasteride is a mechanism for bringing it back into range.

The drug has a very short half life in the bode, but the $1,000,000 question is whether there a a long-term alteration in DHT production and/or effectiveness. I do not think we have an answer to that question one way or the other.

My personal experience is that finasteride is an important medication for older guys on TRT that are experiencing BPH. When dosed properly, it can bring DHT within normal ranges very effectively. The problem is that most docs prescribe it at excessively high levels (5 mg/day). This is because (in the USA) it is only approved for BPH at 5mg and insurance companies will reject claims when it is prescibed at 1mg, which is the only other available dosage.

After numerous labs, I have determined that a dose of 2-3 mg is optimal for keeping my DHT within the normal range. Therefore, I cut the pills in half (2.5mg) and toss the other half. I’ve been doing this for over 2 years and have ZERO sexual side effects from the drug.

I also started a thread but they merged it.

And posted the article and some cliffs about his solution…

A mod answered and I answered the guy in a normal way, but they deleted my reply and blocked my account.

Almost starting to think like a conspiracy theorist. Do they benefit from people who have pfs so their foundation can continue and ask for more donations?

I’m suffering from pfs for 3+ years now so pfs is very real sadly but I believe the dude’s article is the best explenation I’ve read so far.

Therefore, I cut the pills in half (2.5mg) and toss the other half.

Why not save the other half for your next dose?

Why not save the other half for your next dose?

It’s on an auto refill and I get 90 day supplies sent to me in the mail. For each day that goes by, I get a day of surplus inventory. At some point you just can’t store it all or want to use old drug. Since it only comes in 5 and 1 mg pills, there isn’t much of a choice. I suspect that 2 mg would be adequate, but if my doc prescribes two 1mg pills per day, the insurance company won’t pay for it because the 1mg pill is only approved for hair loss treatment. Crazy, but true!

A mod answered and I answered the guy in a normal way, but they deleted my reply and blocked my account.

I’ve seen this several times over there. They claim it’s more to cover their ass because they don’t want people trying whatever unproven solution and get worse and commit suicide or something. It’s less than ideal though when trying to help people and you get banned for it

That forum is a farce, it seems their “solution” is to just wait, could help for some but others are waiting for years without improving. I understand they’re trying to cover their ass but it’s the user’s responsibility if he wants to try it or not so the forum is not liable at all. If we can’t discuss potential cures then that forum is completely worthless and I start to doubt their real intentions…

Lol, now they banned me, just look at the reason:

Dismissive of survey in first few posts; insistently advocated for dangerous and misleading article on PFS

I only said everyone should read it, especially in light of the big new proviron recovery on the forum there. The article stated proviron was the best potential cure in his opinion. Mod also deleted my second post where I said he indeed has affiliate links to herbs but doesn’t even believe that will be enough for pfs patients, the real cure is proviron,… of course he doesn’t have any affliate links to those products. Mods are always talking about the survey too, I said a survey won’t cure us and we could be be waiting for 10 years if we don’t do anything. Of course I said this in a respectable manner… Result: post deleted and banned.

Instead of having a discussion, nope banned. What the hell?

I’ve seen many others who give their opinion but are banned as a result. The guy who made this thread and gave his opinion was banned too. Check his posts and look at the reasons.

The mods on that forum are fascists and don’t allow the opinion and theory of other people.

Makes me wonder about their real agenda…

The article stated proviron was the best potential cure in his opinion. Mod also deleted my second post where I said he indeed has affiliate links to herbs but doesn’t even believe that will be enough for pfs patients, the real cure is proviron,

Crazy. What was the article? I don’t really understand why they’re like that. I tried proviron for a short time but it made me feel worse. I suspect it’s because my E2 was so low already and that made it feel even lower (single digits if I recall correctly). Perhaps if I had tried it longer it would have helped more, I’m not sure. Speaking of which… the proviron I ordered over a year ago randomly came in the mail the other day, haha. It looked like it had been around the world a few times.

I understand not wanting to have a bunch of hack “cures” on their forum that don’t really do anything or worse yet, make people worse, but at some point when there’s a condition we don’t know how to fix it seems like some trial and error wouldn’t be the worst idea in the world. Or at the very least allow people to post ideas. I dunno, I don’t get it. Have you been on hackstasis? They have some pretty smart people and are open to trying about anything, and isn’t as negative as the “other” forum. That’s probably the worst part… if you only read that forum you’re pretty much going to feel hopeless. Their attitude is 100% there is no cure, it won’t get better, nothing works, anything that does work doesn’t work long term, and that’s just how it is.

And you’re competely right, they make it sound like you’re doomed and you shouldn’t try anything but wait for the Baylor study and fill out the survey…Do they really expect some magical cure to come out when Baylor releases or their survey has enough participants? Maybe if they’re lucky in 10 years. We’re on our own to beat this, “just wait” is the worst “solution” to pfs there is. Of course there are some people with severe pfs but even then “just wait” is shit advice. Like I said, almost starting to believe they want people to keep having pfs so they can benefit in some form or another…

And yeah I know hackstasis, looks to be a much better community and forum than propeciahelp without fascist mods. I’ve read there’s on guy there who recoverd recently from HCG, very interesting.

Waitttt wait wait. The Baylor study STILL hasn’t been released? They kept saying it was on the verge of having a major announcement 2 YEARS ago. WTF. I guess that never happened.

Yeah the joe_kool guy or whatever his name is had really good luck with TRT, he is honestly the reason I went down this road. I took a step back and said forget about PFS… with these blood tests and these symptoms, what’s the normal course of action? TRT… so that’s why I went down this rabbit hole. I’m glad I did.

Last time I was on there they had started discussing some relationships between HCG and Thyroid? I need to get back over there and check it out I guess. I’m on HCG now too though so who knows, maybe it’ll help too