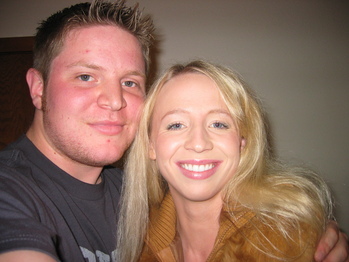 I’ve been reading everything I can find on the velocity diet for the last month. I finally decided to do it. I’m on day 6 right now.

I’m going to give a little background on myself.

About 1 year ago I weighed about 235 at six foot even. Too fat. I ate what I wanted and worked out about three times a month.

Anyway, with the support of some real good friends, I got serious about losing weight. Over the course of about 5 months, I took off about 30 pounds. It made a huge difference.

Fast forward 5 months, I hit a wall and was still about 15 pounds above my goal. I stayed in the gym, but got frustrated.

That summer I went abroad for three months and gained 5 pounds, making me about 20 pounds above my goal.

So after I got back from Spain, I got back in the gym, and continued to eat healthy. But I wasn’t as serious about it as before. SO I basically maintained my gains (and losses from six month earlier). Still couldn’t shake that extra twenty pounds.

Lets do something drastic.

Like I said, I’ve been on the V-Diet for 6 days. I’ve already wrote six entries. I’ll post those below.

oh… that picture up top is what I looked like at a slim 235 pounds. 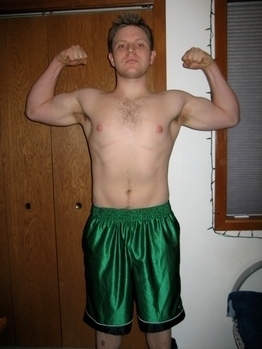 Sorry, apparently I have no idea how to post on a message board.

Anyone know why that picture is sideways and/or how I can delete one of them?

So I’m gonna post my blog entries from a 5 days ago.

Had a great workout with my buddy, but other then that it was a long day with a lot of doubt. The entire day I had this feeling of impending failure.

I started to think of compromises. Maybe I can do the one meal a day thing. I told myself I would make it through the day. My compromise turned out to be three strawberries in my 4th smoothie of the day.

I drank the 5th an hour later. What a long day.

I wake up to day, I look in the mirror. I swear, I swear to you, I look skinnier. Probably the initial water weight loss. Doesn’t matter, I swear I look better then in months.

I think day two will be easier. I just kept telling myself yesterday that I have to make it till I see results, and that will be all the motivation I need. I think this will work.

I?m gonna go on my walk.

I don?t think I like these shakes enough to live exclusively off of them.

Here?s my workout for the week:

I thought about food much much less. I think this is going well. I can already feel the cravings going away.

Wow, its been four days. I can do this. No problem, the cravings are going away. I wanted a solid meal tonight, but not like before.

I think this must be what detox is like. The first day I wanted to hurt people. Second day a little better, but I ate chicken instead of one shake. Yesterday, was a lot better. Today, no solid food. None.

Can?t believe its day six. I know I can see this thing through. I think I might have to take my solid meal early. I don?t want to or need to, but I have a date and this diet makes social situations hard.

Eating is just important social part of life and I?ve cut it out of my life for a month. Can?t believe I only have three weeks and 1 day left though. That?s crazy. I know I can finish. Its so weird, but I totally can.

This diet is the weirdest thing I have ever done, by far. I don?t even care about eating. I cut that out of my life. If you can change the way you think about food, wow. That?s power.

Wow, I was pretty optimistic this morning. I had a long day. I was so tired and light headed today. Since like noon, I?ve just been thinking about how much longer I have. I can do this though.

I just need to settle down. This is actually going really good, so I need to chill out on myself. I?ve lost almost 5 pounds. Also, I made the mistake of wandering into a pizza parlor where two of my best friends work, where I normally get all the free food I want.

Other then the 1st and 2nd day, this was the worst. However, I have almost an entire week down, and I lost 5 pounds. This is definitely worth it. I just need more energy, I don?t like feeling week.

BTW…sorry for randomly posting these blog entries. I type them on my computer and forget to post them.

Its day seven of the crazy diet. I swear every morning when I wake up and look in the mirror I look better then the day before. I think that?s why I?ll continue with it.

204 is the lowest I have ever been. So far I?ve just about shaked the pesky 5 or 6 pounds I found in Europe.

Food: Like I said before, on the first day I started to get pretty desperate for solid food. On day one I went and bought some really lean chicken and planned to have a solid meal every other day. I?ve done that once. It doesn’t even sound that good today, I?d rather just drink my simple shakes and not bother with the chicken.

Later in the day:

I’m feeling pretty good. This diet is definitely working. I’m about 1.2 pounds away from weighing less then I?ve ever weighed in my adult life.

Ufff…made the mistake of hanging around some friends that were stoned. All they did was eat. That made me want to eat, which made me miserable. I bought a bag of beef jerky. That was my first and only slip up.

On a positive note I got my bottle of HOT-ROX extreme. I like those.

Hopefully the cheat didn’t hurt too much last night. I can’t imagine it did. I’m over it.

The worst thing is my girlfriend is coming over, and I’d really like to eat with her. I’m sure I will. I just hate to fail twice. This will be my planned meal of the week. So I’m going to be okay with this one.

Update…the cheat did hurt me. I went up a little more then a pound. I’m telling myself that it was the sodium rich jerky.

Tomorrow is another day, and I can’t let one screw up get me down.

you know there are already support group threads for this right?

Also, just straight up do not cheat. keep a picture of yourself as a fatty around and look at it every time you put any type of food in your mouth. It will keep you on the line.

The VD requires a bit of tough love. don’t be a pussy.

You’re starting with a pretty good physique. You should get really nice results on this diet. Good luck to you partner.

It might just be the picture but you have some horribly skinny legs. I don’t mean to be rude but did you have some kind of injury in past? If you want to improve your overall appearance and lose some unwanted fat, you might want to incorporate some lower body work. 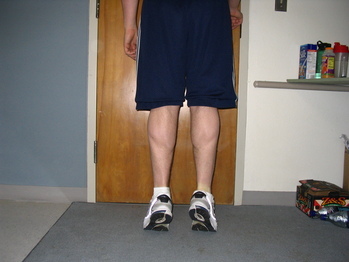 [quote]Boondoggler wrote:
It might just be the picture but you have some horribly skinny legs. I don’t mean to be rude but did you have some kind of injury in past? If you want to improve your overall appearance and lose some unwanted fat, you might want to incorporate some lower body work.[/quote]

Its hard not to take “horribly skinny” as rude.

I never have had an injury, but I do have genetic problems w/my knees making it hard to squat a ton of weight.

I think it is the picture. My plan is to complete the velocity diet, then start to add muscle where I need it.

But more leg work is never a bad idea.

Its hard not to take “horribly skinny” as rude.

How would someone comment on your legs when all you could see was your knees?

I would have told that kid to suck something ASAP, those kinds of comments are just lame.

You were wearing baggy shorts for christs sake, and you STILL took the insult. Grow a pair.

A. Growing a pair to me doesn’t signify really “burning” someone with my keyboard.

B. On having thicker skin, you may be right. Again, web forum, I don’t give a shit.

The worst thing about posting on internet forums is that one idiot inevitably will say something stupid like whats his face up there.

Then you get a couple more posts from other people. Then a few more. Eventually, no one will remember what the topic even was about. WASTE OF TIME.

So sorry for not acting tough with my key board. I’m gonna go drink a shake.

Whoa Whoa Whoa… Why is it so difficult to take any kind of critizism. Your knees don’t look much thicker than your wrists in that first picture. Anybody who denies that is just lying to themselves. You’re lower legs look fine. It’s not that big of deal. As you mentioned it’s not part of your current goal.

I think what I was trying to get across was that you look like you could easily add some muscle to your lower body and that would ultimately help you reach an overall leaner physique. I swear I had positive intentions from my original post. I wasn’t just trying to bash your physique and I apologize if it came off like that.

I’m actually giving the V-Diet a go right now and I’m just a few days ahead of you. I have no will power and have cheated just about every day, still workin’ though! Congrats on your progress and just one word of wisdom. Don’t weigh yourself every day. You’ll drive yourself crazy!

I don’t know about you. I have to weigh myself like everyday. Its that little bit of encouragement I need to stay strong on the diet.

How much weight have you dropped? And when you say cheat…what does that mean exactly? Does that mean your subbing a solid meal for a shake?

I’ve done that a few times. Always something really low fat/low cal. I had three tilapia fillets last night. But it actually ended up being less calories then one shake, and more protein.

Good luck to you

You are bitching about being critisized? You fuckin broke down on day friggin 7 because you were hanging out with people who were stoned. What the motherfuck?

Day 7? Start over. You are no longer doing the VD…now you are doing the douche-face, cheat on day 7, hang out with pot heads diet.

I’m a fuckin Chef…work with food all day long and cook for my family…and I never broke.

So,…stop hanging out with your pussy ass loser stoner friends, lift some weights, and stop complaining. WTF are you even doing this diet for? From your pics, it doesnt look like you could scrape enough muscle off of you to fill a thimble.

I used to wonder why Shugart would get pissed at modifications to his diet…now I know why.

And upon further reading of this thread, I found that the OP broke on day 2. That’s all. Day 2. Holy Shat.

Good luck on the V-Diet… I came pretty much the same route, losing a bunch of weight and then hitting the brick wall. Thats when I started to lift and just kinda forgot about fat loss. However, I start dieting again very soon (fat loss, smart dieting.) I’m going to just generally cut calories with high P and then try to work the V-Diet in right at the end to tie the knot.