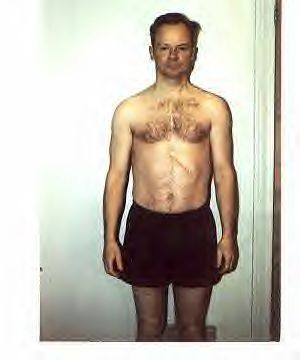 Helly everyone. I came across this website while asking a guy at the gym about his supplements. Now I got hooked on the forums. There’s a lot of good information on here and some supportive people.

My name is Vito and I go by the name V-Man. I’m from the west burbs of Chicago.

I’m 45, 5-9, 176 pounds. I’ve been lifting for a while now. I started working out after having a bunch of health problems. I have cardiomyopathy, a damaged weak heart muscle, which will someday will require a transplant.

I also had a problem with my heart rhythm and had a pacemaker and defibrillator put in. When all this stuff settled out I weighed about 150 and was pretty scrawny as you can see in my before picture.

I work at a hospital and started going to the fitness center we have there. I am now at 176. I have attached a current photo. I don’t like to call it an “after” photo cause I know I still have a way to go.

I would like to maybe do a master’s bodybuilding competition one day. Well that’s part of a very long story.

I joined this forum cause I’d like to find a place where there’s a lot of information and support from good and knowledgeable people and not trash talkers.

I wish everyone well. Drop me a line. I still have a lot of progress to make but with continued hard work and dedication I’m sure I can do it.

Like I said this appears to be a great forum, you guys really look awesome. I hope I can improve and learn more from all of you.

Good luck and keep at it. Train hard and smart and eat clean. There is heaps of good info on this site and much knowledge to be had. 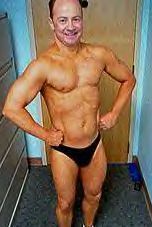 Here is a current photo.

Good work. And don’t be discouraged if you get a rating around only a 5 or 6. That’s probably above average here!

Am I the only one who thinks that second pic looks photoshopped?

Sorry not photoshopped. I didn’t apply Pro Tan to my face.

If you look closely you will see I have two scars.

One is by my left clavicle which is where my pacemaker is and another left side abdominal scar is where my debrillator is.

If anyone would like to see further enlargements please send me your e-mail address. I’m not trying to pass anyone else off.

And if you think my current photo is that good that I would do such a thing then I appreciate the compliment.

It just looks it from the lack of tan, nevertheless awesome work you’ve come a long way.

Too bad this isnt a “rate my Progress” forum, because you would score great. Keep up the good work, I’m sure you’re putting the youngens at your gym to shame.

Thanks for all the compliments. There’s a lot of nice people here.

How long have you been lifting now?
Can you post some more pictures?

Trying to give some constructive criticism: I can’t tell if it’s maybe just the angle, but it looks like you may need to really focus on your lats for a while.

Dave, you are totally correct.

My lats were totally and genetically non existent. Even when I started training I never trained my back.

I always trained the front muscles, chest, arms, shoulders. I also never liked back it seemend all that was getting worked was my bicep. In fact my bicep would go out way before my back got exhausted.

I have been attempting now to work my back more and would appreciate any suggestions. I have incorporated pull ups. I will post some photos tonight when I get home.

I appreciate the help.

Do you do anything else for your back? If not you should really incorporate all the usuals - Rows (you want to work your way up to using around the same weight you bench press), sternum chinups (lean back at the top and try to tough your sternum to the bar) are great and deadlift is awesome.

Back shot I hope.

Thanks for all the compliments, I appreciate it. It definitely helps motivate me toward even more gains in the future.

V-Man1, have you done rows in your training? I’m curious about the coment that your bis are dying before your back. If this is happening on your rows you could consider a change in grip. I switched from a palms-in grip to a palms-up grip recently in order to keep my elbows in tight to my side. I feel it much more in my back now than before. Concentrate on bringing your shoulderblades together as you do the lift.

Hi Vman i too have had heart arythmia issues(atrial fibrillation)have had three ablations.you have a defib fiited, could you not have an ablation to correct any possible rythym issues/ my guess is you get svt? youve done a great job,there is life after heart problems.

Coomo.
Yes I too have had numerous ablation’s. I have wide QRS tachycardia. The problem would be fixed but then another group of cells in the heart would start firing away. So the defib is a back up safety plan, along with amiodarone which keeps my ventricles nice and calm.

Wish you well with your heart. Hang in there.

Third side. Thanks for the suggestion, it might just do the trick. I will try it and let you know. Thanks

Amiodarone is an antiarrhythmic medication used to treat and prevent a number of types of cardiac dysrhythmias. This includes ventricular tachycardia (VT), ventricular fibrillation (VF), and wide complex tachycardia, as well as atrial fibrillation and paroxysmal supraventricular tachycardia. Evidence in cardiac arrest, however, is poor. It can be given by mouth, intravenously, or intraosseously. When used by mouth, it can take a few weeks for effects to begin. Common side effects include feeli...

Look at the side effects. Really can mess with thyroid function too.