Ahmed Chalabi was the White House’s source for information on Iraq, and his info was used by the White House to justify the invasion. Chalabi was on the US payroll and up until this week he was being paid $340,000 per MONTH to be an adviser to the White House. At the last State of the Union address, Chalabi is clearly seen in the balconey sitting right behind Laura Bush.

When will people realize that the White House has screwed the pooch on Iraq?

America’s ‘Best Friend’ A Spy?
May 20, 2004
(CBS/AP) In the latest setback for a man once seen as the possible leader of a free and democratic Iraq, Iraqi police backed by U.S. troops raided the Baghdad home and offices of Iraqi politician Ahmad Chalabi.

American soldiers and armed U.S. civilians could be seen milling about Chalabi’s compound in the city’s fashionable Mansour district. Some people could be seen loading boxes into vehicles. Aides said documents and computers were seized without warrants.

A senior coalition official said several people were arrested and that arrest warrants were issued for “up to 15 people” on allegations of “fraud, kidnapping and associated matters.”

The evidence shows that Chalabi personally gave Iranian intelligence officers information so sensitive that if revealed it could, quote, “get Americans killed.” The evidence is said to be “rock solid.”

Sources have told Stahl a high-level investigation is underway into who in the U.S. government gave Chalabi such sensitive information in the first place.

In addition, sources told Stahl that one of Chalabi’s closest confidantes - a senior member of his organization, the Iraqi national congress - is believed to have been recruited by Iran’s intelligence agency, the Ministry of Information and Security (MOIS) - and is on their payroll.

Chalabi supporters suggested that the raid was politically motivated bid to intimidate the former exile, who has become extremely vocal in his criticism of Washington.

At a press conference after the raid, Chalabi lashed out at the ruling Coalition Provisional Authority, complaining it was coddling former members of Saddam’s Baath Party and treating Iraqis badly.

“I am America’s best friend in Iraq,” Chalabi said. “If the CPA finds it necessary to direct an armed attack against my home, you can see the state of relations between the CPA and the Iraqi people.”

The raid was a symbol of how far Chalabi’s stock has fallen in the eyes of U.S. officials.

Prior to the U.S. invasion of Iraq, Chalabi produced a string of defectors whose stories suggested that Saddam posed an imminent threat to the United States because of his weapons of mass destruction.

A key claim came from a Chalabi-sponsored defector who told U.S. intelligence that in order to evade U.N. inspectors, Saddam put his biological weapons labs in trucks.

The assertion that Saddam had mobile weapons labs was a major feature of Secretary of State Colin Powell’s speech to the U.N. on why military action needed to be taken against Iraq.

The flow of information caused Chalabi’s star to rise in White House and Pentagon circles, despite some warning signs about his reliability.

For example, Chalabi, a former banker, was convicted of fraud in absentia in Jordan in 1992 in a banking scandal and sentenced to 22 years in jail. He has denied any wrongdoing.

Ironically enough, Chalabi’s downfall began with an action he had enthusiastically supported: the U.S. invasion of Iraq.

In an interview with 60 Minutes, Chalabi minimized the importance of the defector who told of the mobile weapons labs.

“What he said is that these are mobile biological labs. He did not say that they are weapons factories. There’s a big difference,” Chalabi said.

Chalabi, who had returned to Iraq with a private army of 700 “freedom fighters” following the invasion, began to lose favor with U.S. officials as it became increasingly clear that much of information he supplied was suspect.

Chalabi holds a seat on the Iraqi Governing Council, but he has been unable to build a base of popular support with the Iraqi people.

The New York Times and the Washington Post report that Chalabi has been feuding with L. Paul Bremer, the American civilian administrator in Iraq. The Times quoted Chalabi aides as saying the former exile’s relationship with Bremer was so bad that he skipped Governing Council meetings that Bremer attended.

Earlier this week, the U.S. ended the $340,000 monthly payment it was making to Chalabi’s Iraqi National Congress. That action was followed by the raid on his Baghdad home. 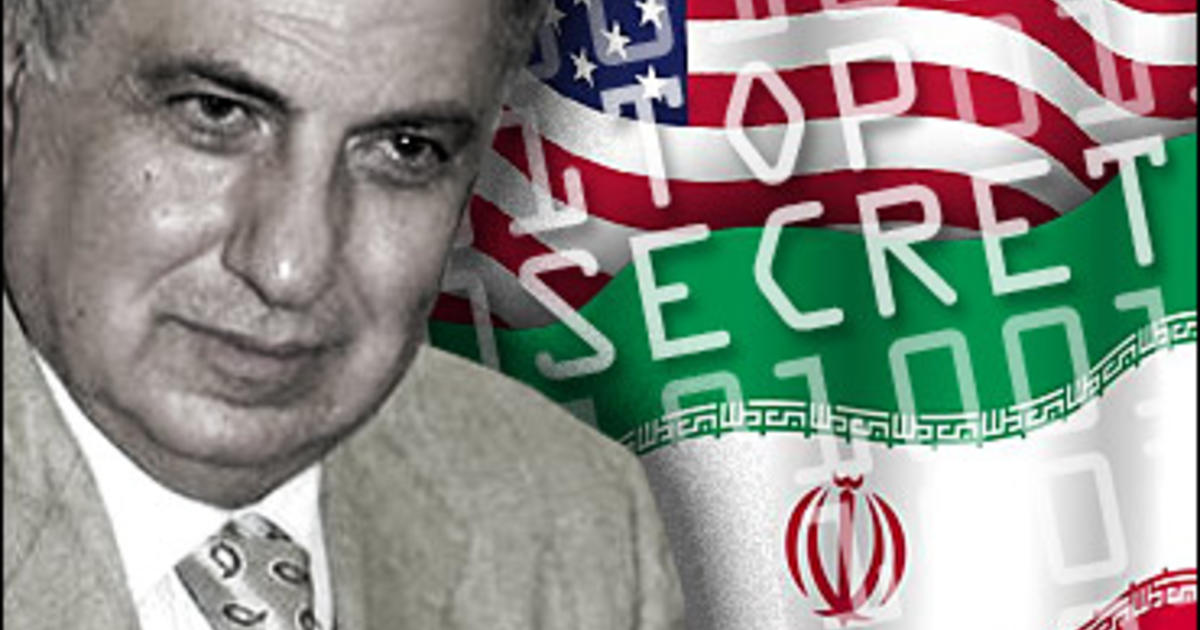 I’m not buying it just yet…

I just listened to this report on the CBS Evening News, and thought it was pretty interesting.

Several months ago I stated that I thought we were in the process of creating the Islamic Fundemantalist country of “West Iran”. Looks like that’s what bushleague’s #1 ally in Iraq was shooting for, too.

Iraqi police backed by American soldiers on Thursday raided the home and offices of the controversial figure who provided the Bush administration with prewar intelligence on supposed weapons of mass destruction in Iraq, including the now-discredited information about mobile labs whose true use is still a matter of debate.

Despite Chalabi’s seat on the U.S.-handpicked Iraqi Governing Council, it seems the Bush administration is going out of its way to ensure that the man who made a career lobbying to get rid of former Iraqi President Saddam Hussein has no American-backed political future in Iraq.

Senior U.S. officials have told 60 Minutes Correspondent Lesley Stahl that they have evidence Chalabi has been passing highly classified U.S. intelligence to Iran. The evidence shows that Chalabi personally gave Iranian intelligence officers information so sensitive that if revealed it could, quote, “get Americans killed.” The evidence is said to be “rock solid.”

On Friday, Stahl reported that senior intelligence officials stress the information Ahmad Chalibi is alleged to have passed on to Iran is of such a seriously sensitive nature, the result of full disclosure could be highly damaging to U.S. security. The information involves secrets that were held by only a handful of very senior U.S. officials, says Stahl.

Meanwhile, Stahl reports that “grave concerns” about the true nature of Chalabi’s relationship with Iran started after the U.S. obtained “undeniable intelligence” that Chalabi met with a senior Iranian intelligence, a “nefarious figure from the dark side of the regime - an individual with a direct hand in covert operations directed against the United States.”

Chalabi never reported this meeting to his friends and sponsors in the U.S. government, says Stahl.

Other tense situations in recent months between the Bush administration and Chalabi include:

American officials have complained privately that Chalabi was interfering with an inquiry into money skimmed from the U.N. oil-for-food program.

Chalabi still has strong supporters in Washington, and the Pentagon continued to pay for intelligence provided by his organization until recently.

It’s unclear why Chalabi’s home was raided Thursday. A senior coalition official said an Iraqi judge had issued several warrants, and details would be released later. Coalition Provisional Authority spokesman Dan Senor said Chalabi and his group were not the targets.

Haidar Musawi, an aide of Chalabi’s, said three security guards were arrested, but they weren’t linked to any allegations. Chalabi said his chief security official, Aras Habib, was named in one arrest warrant but was not detained.

Danielle Pletka, a vice president at the conservative American Enterprise Institute, said she believes the raid was likely “political manipulation in order to disable somebody who has been a thorn in the side of the CPA.”

“We need the United Nations right now, and Chalabi is the prime mover behind the investigation in the oil-for-food program,” Pletka said.

The CIA ? long suspicious of information provided by Chalabi’s group ? has not been paying it for intelligence.

Last weekend, Secretary of State Colin Powell said for the first time on NBC’s “Meet the Press” that the United States was intentionally misled about information on Iraq’s much-debated mobile labs. Not said during the show was that the information came from a defector connected to the Iraqi National Congress.

“It turned out that the sourcing was inaccurate and wrong, and in some cases deliberately misleading,” Powell said, “and for that I am disappointed, and I regret it.”

For officials like Sen. Joe Biden, D-Del., the distancing from Chalabi has been “a long time coming.”

“I could never quite understand the incredible preoccupation of the administration with Mr. Chalabi. I think that reliance has done us great damage in terms of establishing legitimacy,” Biden said.

Wolfowitz said the decision was made as part of the upcoming transition to Iraqi rule. “There has been some very valuable intelligence that’s been gathered through that process that’s been very important for our forces, but we will seek to obtain that in the future through normal intelligence channels,” he said.

Three weeks ago, one U.S. defense official justified the payments to the Iraqi National Congress, saying the organization provided valuable tactical intelligence to war planners. For instance, the official said, the INC may hear that a shopkeeper was told not to open his store one day, indicating an upcoming attack.

“It is a night-and-day difference” on the INC’s information before and after Saddam’s fall, said the official, speaking on the condition of anonymity. “They speak the language. They know the country.”

Of all the controversies surrounding Chalabi, perhaps the most pointed has been his group’s prewar intelligence about Saddam’s purported weapons of mass destruction ? the Bush administration’s leading justification for the war.

Chalabi has come under criticism because large stockpiles of these weapons were never found.

Some U.S. officials were angered by comments Chalabi made in the London press in February. “We are heroes in error,” he told the Daily Telegraph in Baghdad. “That tyrant Saddam is going and the Americans are in Baghdad. What was said before is not important.”

Intelligence and defense officials concede mistakes were made, including an overlooked flag that one defector had previously provided bad information. The defense official, who spoke on condition of anonymity, defended the use of INC sources, saying they were only used to bolster cases that were already being made.

At a press conference after Thursday’s raid, Chalabi lashed out at the U.S. occupation authority in Baghdad, complaining it was coddling former members of Saddam’s Baath Party and mistreating Iraqis.

“I am America’s best friend in Iraq,” Chalabi said.

Here’s a pic of Chalabi behind Laura Bush, at the last State of the Unioun address.

Chalabi may or may not be a spy, but he has been a cancer in the Iraqi equation from the very beginning. For some reason Cheney and the civilians in the Dept. of Defense (Rumsfeld, Wolfowitz etc) latched onto this guy, despite warnings from the State Dept. and sources in the Arab world that the guy was a con artist.

Somehow Chalabi obtained a big stack of records from Saddam’s regime, that he will not turn over to the US.