Just a great story, I thought a lot of you might enjoy.

I’ll be sharing this with my high school students tomorrow morning. 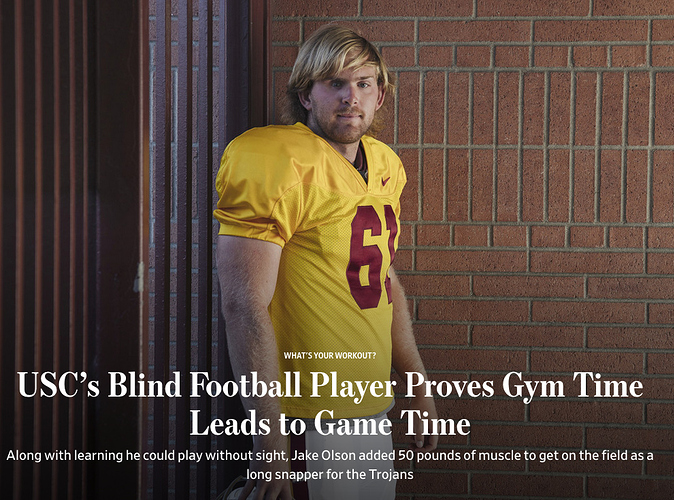 Along with learning he could play without sight, Jake Olson added 50 pounds of muscle to get on the field as a long snapper for the Trojans.

Jake Olson’s last wish before he lost his vision was to watch his favorite football team, the University of Southern California Trojans. At age 12, when he attended a USC practice, he thought his wildest football fantasies had come true.

Mr. Olson never imagined he’d suit up in cardinal and gold for the Trojans years later.

Mr. Olson, 21, was born with a rare form of eye cancer. He lost his left eye as a baby, but that didn’t stop him from embracing sports as a boy. “I absolutely loved sports—soccer, baseball, basketball, football—but I was only good at seeing the bodies,” he says. “I definitely took a few balls off the face.”

Doctors removed his right eye, too, after years of treatments. “As a kid, it was pretty devastating,” he says. “I realized I could sit around and sulk about the one thing I lost, or continue to do the things I love and be grateful that I have an athletic body and mind.”

The idea of playing football sounded absurd, but he thought he might be able to be a long snapper. He just had to master the crucial backward toss to the holder during an extra-point or field-goal attempt.

Heading into his junior year at Orange Lutheran High School in California’s Orange County, Mr. Olson spent every day in July mastering the art of the snap. “I remember my first snap hit the ground and bounced off my coach’s foot,” he recalls. He kept practicing and earned a spot on the varsity team. A teammate would guide Mr. Olson onto the field and square his hips, and the kicker clapped to let Mr. Olson know how far back to snap the ball.

After getting into USC, he walked on to the football program in 2015, a scrawny freshman at 6-foot-4, 185 pounds. The coaches expected him to get stronger if he wanted to see game time. He dedicated himself to the gym and put on 50 pounds by his junior year. The hard work paid off. Last September, Mr. Olson got his first taste of game action, successfully snapping an extra point in the Trojans’ season opener against Western Michigan. “It was one of my favorite moments in life,” he says.

Mr. Olson isn’t cleared for contact during games, but Trojans head coach Clay Helton has an agreement with opponents that if Mr. Olson snaps, the defense won’t rush the USC line. He has appeared late in games where USC has a strong lead, including this month’s season opener, a 43-21 win over UNLV. He snapped on the Trojans’ final extra-point attempt.

This off-season Mr. Olson made headlines with feats that included driving a car for the first time at a Nascar track and jumping off a high-dive platform. He even posted a video on Twitter showing off his quarterback skills.

A business major, Mr. Olson has two years of eligibility left with the team but plans to hang up his football helmet after graduation this spring to pursue another sport: golf. Mr. Olson, who shoots in the 70s and 80s, wants to compete in blind golf tournaments.

A bodybuilding-based strength routine and smarter nutrition helped Mr. Olson obtain his physique. Nick Donnelly, a former strength and conditioning intern at USC, took Mr. Olson under his wing freshman year. “I remember initially guiding Jake around the weight room, watching him hit his head or shin and feeling like a terrible coach,” says Mr. Donnelly, who serves as the head strength coach at St. Joseph’s Collegiate Institute in Buffalo, N.Y. “He had to constantly remind me that he wasn’t made of glass.”

His first two years, Mr. Olson followed a high-volume strength program, doing five sets of 12 to 20 reps of heavy weights. While Mr. Olson had lifted in high school, Mr. Donnelly says he had to teach him the feel of a muscle being activated. “It was very hands-on,” Mr. Donnelly says. “I would grab the muscle he was supposed to be working during an incline bench or lat pulldown and tell him to isolate it so he could learn that feeling. Now he’s built like a brick wall, with his arms popping out of his jersey.”

In the off-season. Mr. Olson called Mr. Donnelly three times a week to discuss tweaks to his routine. He was in the weight room for 60 to 90 minutes, five days a week. He did chest Mondays, legs Tuesdays, arms Wednesdays, shoulders and back Thursdays and “anything I miss” Fridays. Now that he’s put on mass, he’s switched to a program that concentrates on lower weights and higher repetitions. He prefers high-intensity training to cardio, but will ride the stationary bike for a few miles to get his heart rate up.

Mr. Olson says mobility is key to snapping. “I do a ton of stretches for my shoulders, hips and legs,” he says. “I’m pretty much a quarterback, just throwing the ball through my legs. My shoulder and back muscles pull the ball through.” As for accuracy, whether it’s a football or a golf ball, Mr. Olson says repetition is key to mastering the feel of a perfect snap or putt.

Mr. Olson starts his day with three eggs over easy, potatoes or toast, fruit and some type of meat, like sausage. “I try to stay away from bacon, but it’s a losing battle,” he says. He prefers a glass of whole or 2% milk to coffee. Lunch might be a turkey sandwich. Dinner is his favorite meal. He eats pasta nearly every night, usually with fish and a vegetable. Strawberry or coconut cream pie are his splurges.

Mr. Olson is a fan of Titleist and TaylorMade golf clubs and FootJoy golf shoes. Pre- or post-workout he uses a foam roller, baseball or softball to release tight muscles.

He used to listen to rap when training with Mr. Donnelly, but he prefers hard rock or metal bands like I Prevail. 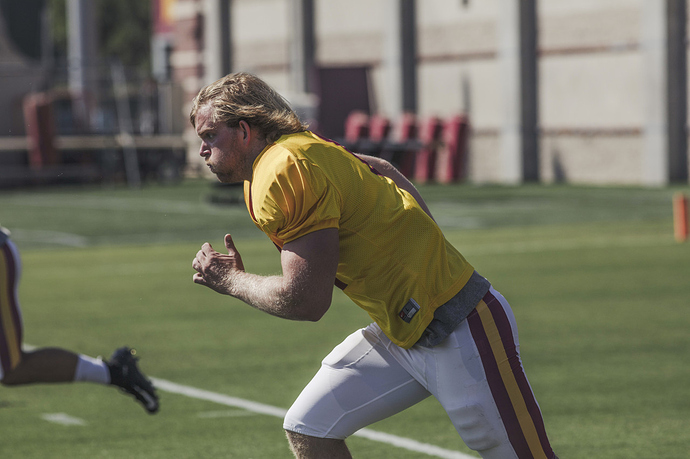 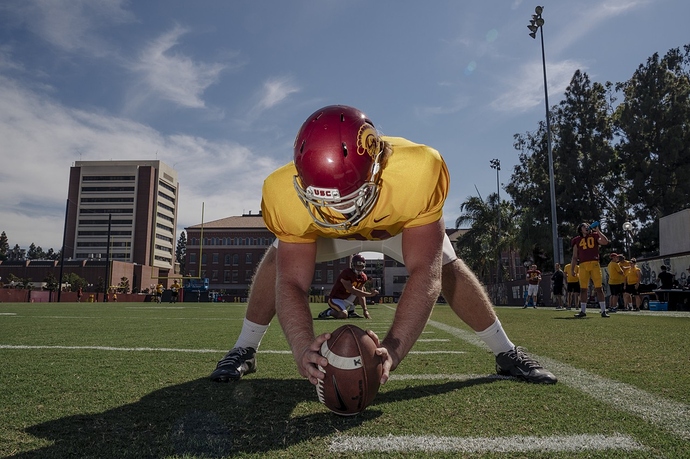 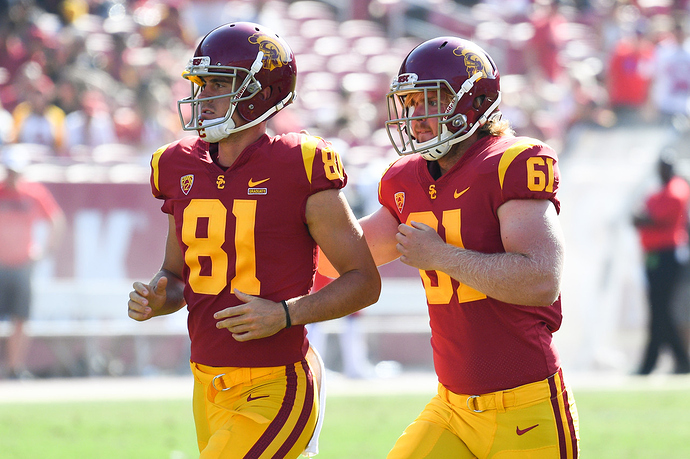 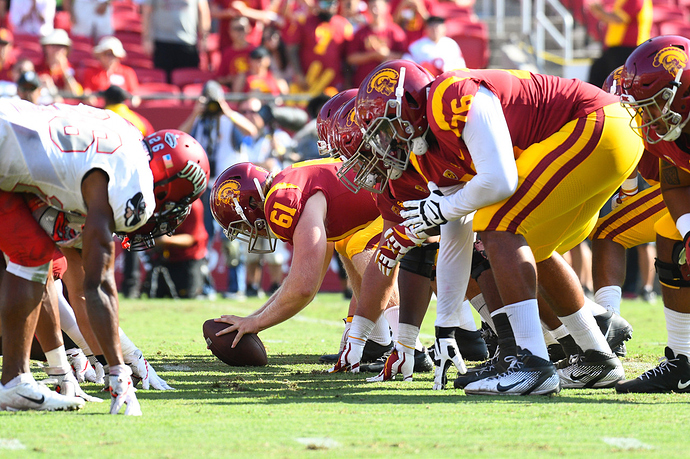 A business major, Mr. Olson has two years of eligibility left with the team but plans to hang up his football helmet after graduation this spring to pursue another sport: golf. Mr. Olson, who shoots in the 70s and 80s, wants to compete in blind golf tournaments.

This is really cool.

When I worked at Celebration in Orlando, we actually hosted the National Blind Tournament, and some of those cats shot 75 or better, it was amazing.

I was actually interviewed on The Golf Channel, and CBS picked it up - I was famous (for a second).

Good stuff, thanks for sharing.

Most people don’t realize how easy it is to be good at golf. The answer is in the dirt - keep digging for it.

This made me smile. 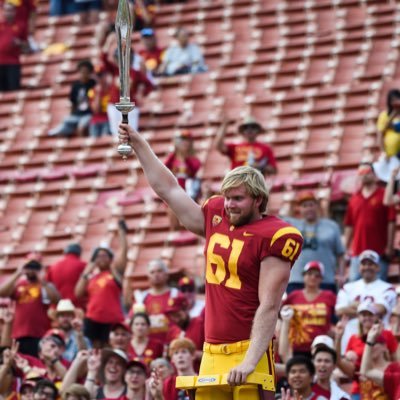 His physician did eight surgeries on the remaining eye before he was twelve, trying to save it or at least buy him time. That must have been a heart breaker.

There are some really sweet videos of him on youtube, ESPN features and such, showing him before and after.