i came up with an idea.
i am sure you are aware of the term undulated period-or variable repitition training.it means to manipulate the reps-set/volume each time to avoid habituation.Poliquin and Cosgrove wrote stuff about it and also there exists some studies on abcbodybuilding.

Even the westside guys use undulated period.within there frame.

I thought of tryin it,cause the blocks of acc. and itens.phases doesnÂ´t work out anymore-i used them with Waterbury paramters.
So my thought would be working out 3x the week and varating in this frame:

FEX Monday would look like : benching flat 5reps of 10 reps with 1 min rest and 75%of 1rpm.Next session i will do incline dumbbell for 2x15 fex and so on.

i will to it with no plan in mind but stay in my frame.
The more i thought of incorporate a ME day on Mo for a pull and a push exercise-this would be for variation purpose and of course to gain Max.S to stimulate mor hypertr.

Right it looks quite like a westside template-but i know you are not doin westside if you are not training at westside.
BUt the ME day is nothing fancy or a privileg of westside.

How you find my idea?
regards,
science

Sounds good if you want to try it, but…

While the concept as applied to bodybuilding seems interesting, I’ve never been able to make it work for me. I think Charles Staley may have summed it for me recently: 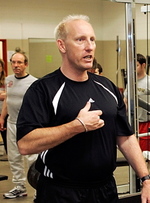 Maximum Athletic Performance ...at 40 and beyond

Yeah, yeah, undulating periodization is as hot as David Beckham lately… except… I don’t know anyone who uses it.

There are only so many ways you can organize your training when you need to develop more than one or two motor qualities:

Linear periodization sucks so bad on so many levels that no one really uses it, and I remain to be convinced that anyone ever used it. The main problem of course, is that by the time you’re in your third phase, the quality you worked so hard to develop in the first phase has all but evaporated.

It’s kinda like studying German in 9th grade, Spanish in 10th grade, French in 11th grade, and Italian as a senior. Every year you start all over again, despite the fact that you never get anywhere.

It’s kinda like “spirit week” at my daughter’s school- on Monday it’s pajama day, on Wednesday it’s hat day, and on Friday it’s twin day. Undulating periodization does serve one purpose however, as does spirit week: it alleviates bordom.

That said, I have four fundamental problems with the undulating approach:

ï¿½?ï¿½ No one actually trains this way. Probably because:

ï¿½?ï¿½ If you can only use one rep bracket per workout, you’re limited to performing many exercises only once per week. As an example, let’s say that on hypertrophy day you perform 5 sets of 12 with 90-second rests. For maximal sterngth day you use 6 sets of 2 with 3 minute rests. And on strength endurance day you use 4 sets of 25 with one minute rests.

Again, once per week. If you never want to make any progress, that’s a perfect frequency.

ï¿½?ï¿½ When you do “mixed” workouts, late high-rep sets benefit from the previously performed low rep work. OK look- I know everyone says that mixing different motor qualities is inherently evil and all that, but I actually see a synergistic benefit in working heavy to light over the course of a workout- emphasizing nervous-system work early in the workout actually facilitates hypertrophy and/or endurance training later in the workout.

And consider this: if you start your endurance training after maximal strength or power training, it’s like you’ve got a head-start, thanks to the fatigue accululation you’ve already induced.

ï¿½?ï¿½ Almost every athletic event or physical task starts fresh and ends fatigued- so why not train that way? When you think about it, it doesn’t matter if you’re talking track and field, tennis, skiing, badminton, or powerlifting- you start off fresh and finish off tired.

The aformationed events differ only in extent. This might be the least-appreciated aspect of the specificity principle when I think about it.

Which leads us to the final, best, and arguably only way to organize your training:

At least everyone ends up there, eventually.