I can understand that, even at 26 I feel better closer to 181 versus when I’m 200+. I just feel more mobile and my breathing and joints are better. My morning weight is around 188 now but my strength hasn’t dropped any. I’ll let my weight be where it is for worlds so long as it’s under 200 I’ll be fine. Being able to cut large amounts of weight does allow me to eat for recovery and not worry a whole lot. Once I hit 205-210 I’ll start trimming back down just because it’s miserable cutting from 200+.

Bump. I’m down to 202 and am going to start posting/recording under 200 PRs. How are all the lightweights doing?

[quote]DoubleDuce wrote:
Bump. I’m down to 202 and am going to start posting/recording under 200 PRs. How are all the lightweights doing?[/quote]

I remember you being a big guy, am I wrong? What are your numbers looking like?

[quote]DoubleDuce wrote:
Bump. I’m down to 202 and am going to start posting/recording under 200 PRs. How are all the lightweights doing?[/quote]

I remember you being a big guy, am I wrong? What are your numbers looking like?[/quote]

Hah, I’ve never thought of myself in a big guy. I was as heavy as 240. Leaned out to about 215, gained back up to about 225. Then I’ve been having some health problems and decided to get me some hawt abs.

Strength wise it’s hard to say. I’m currently training very differently than I have before plus a ton of cardio. My bench is still pretty close to where it was. Squat is maybe down some (though I’ve never been a good squatter), but I’m training without wraps or sleeves that had been a crutch. I’m going to have some days off over thanksgiving, and I plan of testing out where I am rested when I get back.

I’m guessing somewhere around a 450 squat (without wraps) and a 385 paused bench. Really not at all sure about my deadlift, I haven’t done a heavy regular dead in a while.

So, I had kinda quick my old log a while ago. Been going through a lot of stress. Selling a house that wiped out much of my savings. Ridiculous pressure from VPs at work and too much travel keeping me away from home and my wife. All 3 of our cars...

Howdy fellow lightweights. I competed at my second meet today so here are the results from that.

So ended up with a 487.5kg total, which is enough for a silver ranking, which means I’m now allowed to enter equipped nationals if I feel like it.

At 1:30:40 there’s a fantastic FDB during the award ceremony (although I must admit I didn’t look as swole with my shirt off as I would have hoped)

Here all the lifts are in one video. Much worse quality though

Compared to my last meet I added 37.5kg to the total while my bw decreased by 8.6kg

I hit a 185 x 4 strict press today at a 195 BW. Nothing impressive but I’ve had some decent progress on OH lately and it’s hard to come by lol.[/quote]

i know i’m a lil late but thanks! haven’t been around much here or the gym. hopefully i’ll be back on this thread

Only got into powerlifting this past july, use to just do bodybuilding style workouts and kickboxing but have switched over to PL and loving it. My bodyweight fluctuates around 180-185lbs and my best gym lifts so far have been;
Squat: 420lb
Bench: 255lb
Deadlift: 420lb
Would like to compete one day but at the moment I just train by myself or with a couple friends at my university’s gym and don’t have a solid team behind me.

[quote]barricade wrote:
Would like to compete one day but at the moment I just train by myself or with a couple friends at my university’s gym and don’t have a solid team behind me.[/quote]

Not really necessary. Having a bud go with you is helpful, but not the end of the world, much less a team.

Well, I weighed in at 197 this morning. I plan on being annoying and posting pretty much everything I do as an under 200 PR. Hah.

hit a 275 close grip bench today. My training partner messed up the video though

And so it begins…

Pull ups are easy when you’re a lightweight. 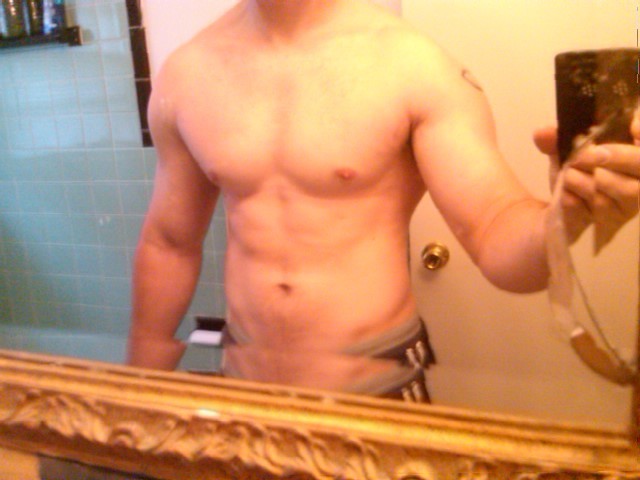 Starting to see abs while relaxed…

See if this works. Normally my phone videos play at high speed.

bar drifted over my head, managed to pull it back over my chest, catch the bar while moving in the wrong direction, and muscle it up with my butt off the bench.

First time deadlifting in a while, an easy 350x8 from a 1" deficit.