Anyone know anything about taking a antidepressant mirtazapine while being on TRT? I take 100mg a week of test and my starting dose is 15mg of mirtazapine. I will be increasing it to 30 mirtazapine in a week most likely.

I’m on 45mg mirtazapine and 100 mg test a week. I’ve had no issues, cross-interactions that I can tell between the two. If you’re new to mirtazapine be aware of the simple carb cravings many people, including myself, experience on the drug. Mirtazapine seemingly loves sugar. May or may not be dose-dependent.

Do you feel tired after you take 45mg of mirtazapine? 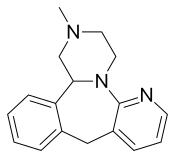 Mirtazapine, sold under the brand name Remeron amongst others, is an atypical antidepressant, and as such is used primarily to treat depression. Its effects may take up to four weeks, but can also manifest as early as one to two weeks. It is often used in cases of depression complicated by anxiety or insomnia. The effectiveness of Mirtazapine is comparable to other commonly prescribed antidepressants. It is taken by mouth. Common side effects include sleepiness, dizziness, increased appetite a...

Can you take with T? TRT restores youthful levels of T. So the question is whether one Sould castrate guys so they can tolerate the added drug.

[quote]pugger wrote:
Do you feel tired after you take 45mg of mirtazapine?[/quote]

I take it at bed time. Helps with depressive insomnia. Never taken it at any other time. Lethargy is a known symptom though.