Hey guys, the program I’m on now recommends some kind of Ab work as assistance on the lower body days. It recommends 5 sets of 10-20 reps of the ab wheel in the sample program. Only thing is, I’ve barely trained abs ever, and they’re weak because of that. I couldn’t do 10 reps of the wheel in a row so I took a 45 sec break every 5 reps for the first set. And by the second set (and halfway though the 3rd) my form was pretty bad and I felt like I was using WAY more arms and shoulders than abs. So I just did a couple minutes of planking afterwards to account for the 2 and a half sets I couldn’t do.

Should I stick with the ab wheel and progressively try to do more and more reps of it every time i do the lower body assistance work, or do y’all think something like sit-ups would be better? Any input from ab wheel enthusiasts is greatly appreciated.

You can try them kneeling rather than from standing position.

Try them using a barbell and round plates or even an Olympic dumbbell with plates loaded onto it rather than a “real” Ab wheel apparatus. You may find the barbell is more stable.

There is an article on Tnation about how to progressively advance to a full standing Ab wheel using a 2x6 piece of lumber as a ramp.

Hanging leg raises are another good exercise. You can adjust the difficulty from simply raising your knees to parallel with bent legs, to lifting both legs to parallel when held straight out, to raising straight legs to chin / head height, to raising them up to the point where you actually touch the pull-up bar overhead. These can also help decompress your lower back a bit.

If all that doesn’t work or you just need some more variety then decline sit-ups on an FID bench in decline position holding a Medicine ball, weight plate, or dumbbell works pretty well too.

There is an article on T Nation about how to progressively advance to a full standing Ab wheel using a 2x6 piece of lumber as a ramp. 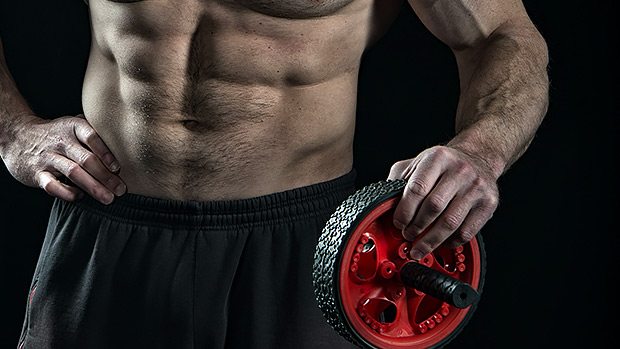 Tip: How to Get Your First Standing Rollout

You probably have one of these things. Here's a clever way to work your way up to the most bad-ass variation.

I can do standing ab wheel rollouts and I never used anything special to get there. I basically got to where I could do them kneeling for sets of 30. Basically to a point where they were no longer a challenge.

I then just did them from a standing position and would go out as far as I could without failing. So, if all I could roll out to was 4 feet and bring it back, that is what I did. Every so often inching out further and further until I was parallel. I then would just go out parallel and put my knee down. Eventually, I got to where I could do 1 rep standing, then 2, then 3 and so on. I can do them for sets of 10 now.