Trials of an Over 40 Lifter 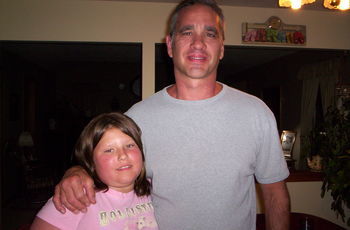 By way of introduction, my name’s Matt, I’m 48 and 6’2". I weigh in at about 210. Not sure what my BF is, becuase I’ve gotten conflicting readings. My Tanita scales say 22%, but the skinfold caliper test at Bally’s 7 years ago said 16%. Obviously, I like to think the calipers are more accurate…

I’ve been lifting on and off since I was 18. When I was 18 I got injured and couldn’t work. Since I was living alone and far from home, I dropped from 175 to 145. You can imagine how skinny I was, so I started doing push ups and sit ups. When I reached the point where I could do 3 sets of 50 pushups and about 500 sit ups, I decided it was time to start lifting weights.

I love to lift, but this year has been tough. Had some health problems, 6 months of chemo from Jan to June. That stuff sucks, let me tell ya. The good thing was that I lost some weight that I needed to lose.

We have a pool, so my main source of exercise the summer has been swimming. It’s been more benefical than I would’ve thought. Gotta say my pecs look better now than they did before. They lost that layer of fat and tightend up. My waist is a lot slimmer, and even though I haven’t done situps all summer, I have def in my abs. Who’da thunk it?

Last couple years I was doing a lot of O lifts. Clean and press, overhead squats and chins were my favorites. Situps and some dumbell work to compliment that, and started doing squats again after a long break. I quit doing squats for years because was going to karate a couple or 3 times a week for cardio, and I figured all that other stuff was enough.

Started lifting again in July this year. I guess I went to far too fast. I was doing clean and press pretty heavy, considering it’d been 7 months. Added chinup ladders and squats and flat benches. Then I was doing elbows at martial arts class and my left elbow swelled up like a ping pong ball. That slowed me down a bit.

Feeling good now, though. Ready to get started lifting again. Started with chins and lateral raises yesterday. Today I’ll do a light set or two of squats and some bench. Maybe a few supplemental dumbell sets.

I don’t know if the pic will upload, but that’s me.
Matt

P.S. I love this site, esp CT’s and Waterbury’s articles.

I turned 52 Friday. Good luck to you in your training and with your health.

44 here Bro…keep the faith and keep pumping. It is a great site. Soak it up like a sponge.

I read your passage about 6 mos. of Chemo and then saying “the good thing I lost some weight I needed to lose” Holy shit man that is the right attitude. Props to you. Fuck it if it doesn’t kill you then it makes you stronger. Hope all is well now.

48 here as agree Great attitude on the chemo weight loss. Keep pushing (and pulling) and at our age we need all the good food and rest we can get (I gotta keep saying that so I will remember to do that as well lol).

I will be 51 in a week. Still going strong after a long layoff from lifting. Started back last October 2006.

Congrads on your post, progress with chemo, and the drive to keep going. I too am 48, have all the usual aches and pains, injuries, and BS that comes from living. I dropped 27 pounds, Velocity Diet, and am teaching myself to do pullups now.

I have been on and off this site for 3 years or so and do like the writings and input. Especially Dan John, who taught me how to squat via the internet, Stutgart, and enjoy Waterbury’s stuff. Still chasing it and having a good time. My Best, WD

Thanks for all the kind words and encouragement. I appreciate the comments about attitude toward the chemo. Feeling good now and that’s all in the past. It was a bitch, but life goes on.
M