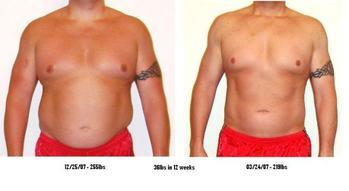 Now my question is, when I reach my goal weight of 215lbs, how should I increase my calories to maintain that weight. Should it come from more protein or fat and carbs? I think I eat a lot of protein now. I also take 3g of flax/fish oil a day, and most of my carbs come from green veggies. Shpuld still try to keep that 40/30/30 ratio or just go by feel?

Thanks for any help.

Hmm if one was slowly cutting you could pretty much ride the current intake to a stall. to where you level out stop losing and gaining and the slowly increase 250 or so a week.

if your dropping 2-3 lbs in theory your in a hell of a deficit over 1000 a day so you should be able to safely increase say 500 k/cal and ride that see what it does.

from what??? well you havent been really low carbing so the water gain shouldnt be an issue. id just aim to get 1 gram protien per lb and the rest fill in what works for you, fats/ carbs as long as healthy choices you should be golden,

if the 40, 30, 30 has been working stick with that just raise total intake

I actually would recommend that you get 215g of protein every day. That’s not much more than you’re taking in now. At 215 pounds, fat is perfect at 86g per day. So where can you add in the extra 500, 1,000 or 1,500 calories? Start by making sure you optimize pre- and PWO nutrition. Surge goes down easy, and at your body weight, you’d benefit from a double serving. From there take in a whole food starchy-carb P+C meal. From there, start taking in carbs that are starchier in nature in the first three meals of your day.

Just some ideas of how, where and what to add into your current plan.

Yeah, 40/30/30 is just what I would like have each day. I mostly worried about getting the 200g of protein and let the carbs and fat fall where they may. But, it is the ratio I would like to have.

I tore my LCL last night, so the real test is going to be if I can maintain this weight.

I guess my days of dieting are just beginning…