Training to Become a Police Officer

This is something I’ve thought about for a long time, and I’m taking steps to make it a reality.
But this is mainly a training question- how would you go about training somebody who wanted to be a police officer?
My reasons are varied. To start with, I wanted to uphold the rule of law to defend democracy etc.

At the moment though, foremost in my mind is that I could move in with my girlfriend and help support her children if I had a police officer’s salary, which I can’t do with my current job.
I’m assuming a lot of condiitoning. But to my mind, some weight training will be essential.
What are your thoughts on preparing somebody for this role? 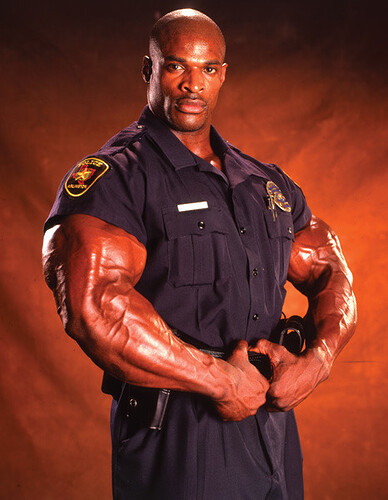 [quote]Der_Steppenwolfe wrote:
This is something I’ve thought about for a long time, and I’m taking steps to make it a reality.
But this is mainly a training question- how would you go about training somebody who wanted to be a police officer?[/quote]
If you’re talking about nailing the fitness exam, it partly depends on what they’re calling for. I think it’s usually bodyweight stuff (push-ups, sit-ups, maybe pull-ups) and a mid-distance run (1 to 3 miles) for time. Depending on your current abilities relative to the target numbers, simple strength work with some “event”-specific training should be fine.

If you mean afterwards, you’d need basically the same attributes as a full contact athlete or military personnel - strength, speed, agility, conditioning, and mobility. Note I didn’t mention staying lean. If you work at the previous qualities, your bodyfat should take care of itself, but you don’t get bonus points for having abs under your vest.

Also understand that “functional” is not a dirty word, but that doesn’t mean you should train entirely with TRX straps on BOSU balls.

Well, according to the website I just have to score level 5 shuttle 4 and push and pull 35kg.
I think we can be a bit more ambitious than that.
I’m thinking of some fartlek runs, running PLP and two high intensity weights sessions a week.

Thanks. I’ve decided on westside for skinny bastards, at least for the next six weeks. Will also do loads of conditioning work as per the ‘coming into season’ template. I’m thinking burpees, fartlek, a bit of running and stuff, plus some more explosive exercises as suggested above.

It is going to depend somewhat on what your local PD requires for the initial fitness test and also what the training looks like once you have been hired. When I went through (keep in mind I’m in Canada and your process will likely differ somewhat) the initial fitness test consisted of an obstacle course (running, jumping over walls, dragging a 150 lb dummy for distance etc all of which was done wearing a weight belt to simulate the weight of a duty belt) followed by a shuttle run which added up to over 1 km to get a minimum passing grade.

Once hired, I did 4 months of recruit training - classroom stuff, scenarios, pursuit driving, firearms, and so on plus daily fitness. The daily fitness was mostly running based and we were doing up to 12 km runs by the end of the training. There was also some strength based stuff but this was not anything that your average, reasonably fit person couldn’t handle.

In my case I showed up at almost 210 lbs (at 5’6") and quite strong but this actually worked against me. While I did some running to prepare I didn’t do nearly enough and it showed. I lost 28 lbs during training (our training also consisted of sleep deprivation and frequently missed meals). The extra muscle mass that I was carrying at the time was a hinderance given the circumstances.

If your service has a heavy running component to their training do yourself a favor and prepare specifically for what is going to be required. Other types of conditioning work will help obviously but nothing prepares you for long, shitty, boring running like training the specific task itself. Keep in mind that these runs may also be done in boots or with a weight belt or vest.

Contact your PD’s recruitment office and gather as much information as you can about the preliminary fitness testing and the fitness component of recruit training and then train as specifically as possible for what is going to be required. Once recruit training is through you can then concentrate on strength and hypertrophy training again.

Weren’t you diagnosed w/ asperger’s? Can you be a flatfoot with that? I may be confusing you w/ someone else.

I don’t know. I’ve looked at the requirements and it seems OK, but I’m going to have a chat with an officer tomorrow to find out for sure. It’s not a particularly serious condition, and nobody really notices it, so I should think it’ll be fine.