Training for the Gimpy 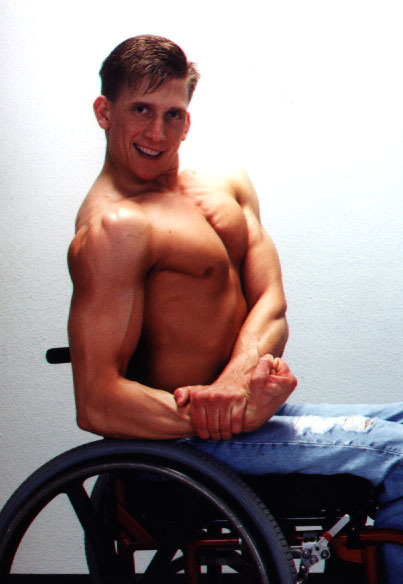 403×584 47.6 KB
Ok, after years of being on again/off again and having turned into a worthless (average) pile of flesh, I’m pumped. I’m REALLY pumped. The gym was almost forgotten over the course of the last 2-3 years. However, the decision not to accept that kind of lifestyle, combined with T-Nation, has become my salvation. The past several days I have spent a LOT of time surfing T-Nation, plus some time at Joe Defranco’s site; talk about inspiration. Heavythrower also has thread with some great inspirational, old-school, hardcore photos: http://www.t-nation.com/readTopic.do?id=461809 . All of this has me excited and ready to go. Today was shoulder day. It was also the first really “focused” day since I started back 2 weeks ago. The post workout buzz was great. Staring glassy eyed at the vegetables in a grocery store for no apparent reason was rather enjoyable. Why did it take 2 weeks to build up to an almost decent workout? If I just dive into training, I’ll get so sore the bathtub becomes a black hole. That is not fun.

I know my routine needs some work plus I REALLY want to incorporate some strongman type exercises. It would be a great change of pace. This will definitely require some creativity to pull off successfully. After all, I am a paraplegic. Anyway, we’ll get back to the strongman training later. First, here is some background. Being in a wheelchair I tend to over train easily. Remember, I use my upper body all day long for EVERYTHING. Getting in the tub is a dip (pun not intended), getting in the car is a type of dip. Pushing the chair is a thousand minor shrugs and tri extensions …etc. So, the total volume of lifts performed in the gym may look low to many people. I tend to compensate for volume with a lot of breakdown sets and using a lot of rest/pause sets to squeeze out a few more reps. Also, my paralysis starts at thoracic vertebrae 5-6 which is rather high and made balance total hell to learn. When doing bench press, the weight is literally used much as a high wire walker would use the long pole for balance - shifting slightly left and right to keep the body centered. Luckily, I have recovered the upper layer of abs, most spinal erector and a slight amount of hamstring. Finally, with the exception of the cable crunches, ALL exercises are done on benches or on a machine.

Somehow tied in with Muscle Media 2000, were 2 great little training manuals: Big Arms and Big Bench by Brooks D. Kubik and Stuart McRobert. They greatly emphasized the need to use basic multi-joint moves to build mass. The also emphasized heavy weights with low reps. If T-Nation can get permission to reprint these, they would make a nice addition to the beginners section. Adapting the manuals to fit my needs, the first serious 8 week training cycle was based on sets of 5 reps with 3 a minute rest between sets. It was the first time this ectomorph was able to put on noticeable muscle. The second serious 8 week training cycle was based on 1 week of 8-12 reps, with one minute of rest between sets, alternated with 1 week of the aforementioned sets of 5 reps. This was also rather productive.

Wednesday: Back and Bis

The above and lots of focus on nutrition, supplementation and even visualization led to the '94 photo at the top of the page. I know even at my best I was still a LOT smaller than many of the ppl here. However, now… OMG… it’s just appalling. How does a person get skinny from the chest up and a gut at the same time? It’s just sickening. I’ll never fall back into the pathetic shape I’m in now.

Now about that strongman type lifting… It sounds like a great change of pace and it would help with some core building. Five or so years ago I used to do a fair amount of outdoor activities that were physically demanding. For example, building, repairing and finally cutting away 1/2 of a 20 foot deck was rather demanding. The deck was built out of a pallet that hauled an 18,000 lb. piece of equipment. You could park a tank on it. It was quite enjoyable to toss the 4x4 and 4x8 beams as far as possible. Plus, the neighbors were really puzzled to see a gimp doing something like that. We have to keep John Q. Public entertained don’t cha know. My idea is to get some 4x4 or 6x6 beams cut to lengths of say… 4, 6 and 8 feet. While seated, I can throw the beams forward with one arm extended to support mid-beam and the other cupping the end of the beam to create a redneck shot put. Throw the beam several times until the yard has been crossed. Then hold the beam in a bit of a BP style and press the beam forward and up at about a 45 degree angle, crossing the yard again. That gives 2 exercises with a piece of lumber. Next, I could manage a couple exercises with a solid dumbbell. One hand would hold onto the wheelchair frame just outside the knee. The upper body would rotate back so the other hand, with dumbbell, would be almost behind me. With a rotation/fly motion the dumbbell could be tossed by either swinging from the side or by swinging more overhead. Cross the yard this way and then return with a different dumbbell throw. While seated normally, hold the dumbbell between the knees with both hands. Then, hurl it overhead and backwards. The last idea was to come up with a tire flipping adaptation. This could be accomplished by flipping something like a 6’ log. One hand would anchor by the knee while the other hand reached down and did the lifting and flipping.

If you have actually survived this inflated post and have advice and/or suggestions, I thank you.

As for w/o’s I have a good friend whom has spinabifada (sp) and is confined to a wheel chair as well. I can say what served him the best was to do almost all training in the 5 reps or lower range for the most part. Like 10x3 or what not. Like you said you are using your upper body all day. That is more endurance typwe work. In a sense your upper body will respond like the lower body of he average Joe.

As for strong man stuff. Shoot I dont know. Just get creative. I have seen some awesome feets done by some strong willed and creative folks. Can you drag things with the chair. You could hook something to the chari and then a rope to something else and drag it to the end. I think anohther great Idea would be highland games type stuff. Throweing heavy onbjects. Also various activities where you pick things up. like snacthes and clean and press even 1 armed.

Shoot I dont know. Wish I was in your area it be fun as hell to try and figure some things out.

Once again great work. Nice job keeping a positive outlook on things and not wanting pity and what not. Getting in there and just getting shit done. I think like most people whom have a disability you probably dont want respect for the fact you are able to do something with a disability, but simply respect for what you accomplish regaurdless of the disability.Thats what I got bro. I have a bum leg. Had the pelvic broken in 16 places etc. I know I dont want to be looked at different for say lifting a 500lb DL’ Hell knopw I wont to be held at the same standard as others thats what keeps me pressing on.

Sorry just wanted to explain where I was coming from.

Once again, keep up the enthusiasm and keep us postied on what you figure out.
Phill