Just switched from clinic to PCP doc. On 100mg T and 250 hCG/week. No AI. I have been on TRT for two years, never really had an E2 problem. Just got bloods. Doc ordered Total Estrogen and not E2. Total Estrogen range 60-190. Mine came back 666.4. I just ordered a new test for E2 sensitive. I am freaking out right now. Why is my total estrogen so high? Should I be worried?

If you’re feeling okay/good, I wouldn’t worry about it. Knowing the number doesn’t change anything other than your knowing.

Total estrogen is pretty meaningless without context. E2 is what’s important. Your doctor wasted perfectly good blood and freaked you out for no reason.

But why is my total estrogen so far off range?

Unsure. Unless you’re having symptoms I would be unconcerned until you have further reason to worry.

I believe total estrogen is getting the results of the different types of estrogen in the body.

No clue why this would make any difference except cost more mo.

I would ask him why and justify the money being spent.

If he can’t answer it, then you have a doctor who is just trying to make $$$… probably.

Doctors do have wholesale pricing at labs. If the doctor bills you for the lab , the doc is obviously getting a cut.

Of course it’s getting the total of all estrogens. That’s the name of the test for Christ sake.

The question is asking if this is pretty normal for it to be 3-4x the normal upper limit due to TRT or not? I’m curious why it goes that high too, even if it “doesn’t matter”. I’d say not enough guys test total E to be able to answer that question though.

I think, with us on TRT, it’s converted from estradiol and maybe with some, androstenedione. I would guess it’s normal for total E to be high in TRT patients, but I’ve never checked it. I have seen situations like the OP’s, guys treated elsewhere, getting total E tested and it is very high, they are also freaking out. They talk around, end up in the office, we run labs and they come back with a mildly elevated E2 level, or even in the 70s.

I probably should know more, but because E1 and E3 effects are so minimal, I’ve not thought much about it. Might be interesting to run both tests on a few guys.

If you can function sexually , erections & orgasm I wouldn’t get worried. Many guys have high numbers and they function normally and all is good.
When I got out of range my libido and erections disappeared and it was time for me to get very serious and do something to get back in balance.

Do you think hcg could cause such a rise in total estrogens? With e3 and whatnot?

To help out. I remember having total estrogens done cause primary did not know what to order. 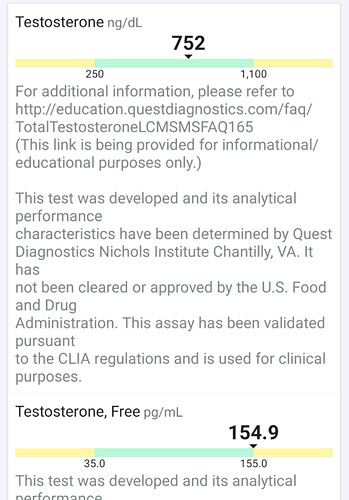 Also previously did this for fun 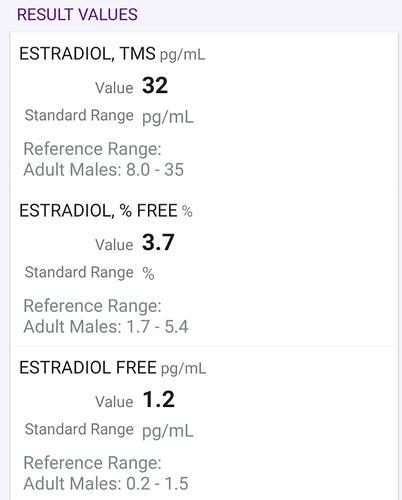 You having 3 times total estrogens should be investigated further.

Not sure what therapeutic value of this has though.

We’re you on hcg?

No. Just testosterone cypionate about 100mg a week

Generally, yes, but your dose is pretty small, so I would think only a small part of it, if any. It’ll be interesting to see your E2 level.

Am I in danger now though? I’m really freaking out

No. Stop worrying about it. Why would you be in danger?

Because my total estrogen is 3x the norm!

I’ve got a bit of a theory about gyno and total estrogen.

I’ve experienced gyno before and e2 has been in range… what was my total estrogen at the time?

Can e1 and e3 act to stimulate growth in mammory tissue if sufficiently elevated?

Aside from paranoia, do you have any symptoms of high e2 (which is the only one we care about)? If not then you need to calm down. It does you zero good to get worked up over something that’s absolutely meaningless. My e2 would blow your mind. It causes zero issues. Numbers mean very little without the context of symptoms. Nobody treats numbers, they treat people, and people either have symptoms or they don’t.