Too Many Likes Given?

Hey Chris. I generally get this message whenever I try to give out a like on T-Nation. Is this normal? 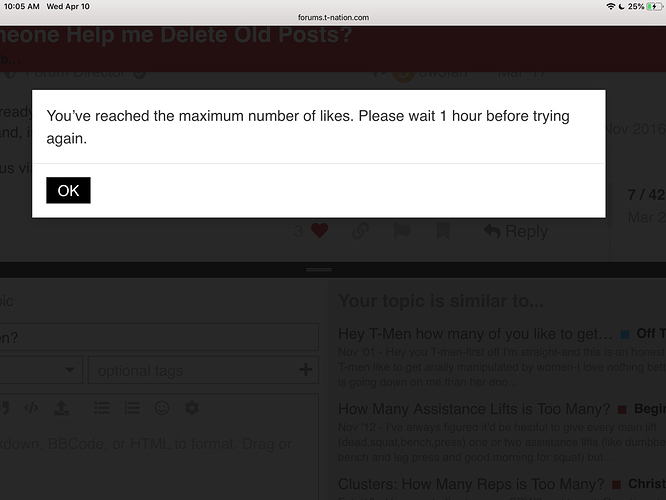 Or did I just like too many people’s posts? Is there a certain time at which the number of likes I am allotted resets?

Too Many Likes Given is basically the opposite of Zero Fucks Given. You just care too dang much.

But yeah, I think the forum is set to 75 Likes per 24 hours for most members (which, double-checking, you’ve hit). It’s not really a “bad” thing, of course. The idea of the limit in general is to keep the Like meaning something more than just “I read that post”.

If you’ve been seeing it whenever you hit the Like button, if it’s been showing any and every time, then something’s off and it can be looked into.

I feel a little cheated knowing you’ve just been handing out likes like a cheap hussy. I thought we had something special man.

I feel a little cheated knowing you’ve just been handing out likes like a cheap hussy. I thought we had something special man.

I’m a likes whore, what can I say? I just can’t keep my filthy, dirty likes to myself. I mean, shit, I can even “like” two, three, five, ten people off all at the same time. It’s just so fucking addicting.

Exactly. As I make myself known on the forums, I get more likes; which satisfies my addiction for likes (you know, with me being a person from Generation X and all). I completely rely on what other people think about me in order to feel validated and like I have any sense of worth! It’s a great way to live, I highly recommend it. Social media has done SO much for my self-esteem.

Edit: just kidding! I described all of my peers in a nutshell, though.

Unless you want to have a good ratio like me.

Oh, hush. You attract more flies with honey than vinegar.

Super Dank posters have more “likes” than they do comments/posts.

Unless you want to have a good ratio like me.

And some guys just all about symmetry.

I don’t know what this means. Is it a typo?

He has never posted.

Edit: I clearly read those numbers the wrong way round.

He posts almost exclusively, and nearly daily, in the Tactical Life thread in Combat.

Let the likes roll in