Any of you peeps believers?

I don’t know what to believe at this point. It isn’t like massive pedophilia rings by powerful elites are all that rare in our world…

I’m pretty much at the point where, if it is real, I hope to Christ, no matter who’s involved, they are found out and burned at the fucking stake. All while being able to let those victims that wish to be, anonymous.

I don’t know, are you afraid of being “woke?”

I had to look it up to find out what it is. Once I did, I realized that I don’t even care. I can think no less of of politicians and their cronies than I already do.

Podesta’s WikiLeaks emails have uncovered a rather large ring of pedophile in DC all centered around a couple cronies and their local businesses, which are pizza joints.

It isn’t completely into “9/11 was an inside job and Sandy Hook a hoax” level of absolute batshit territory as far as conspiracy theory goes, but there are branches of it going there. There is a contingent that is claiming human sacrifice, Satanist, illuminati and Masonic evils, etc. It works back into the Haiti relief from the Clinton foundation, and there is even a theory that Breitbart was about to uncover it (he found it through taking down ACORN) and that is why Obama had him killed, and the medical examiner that looked at his body. Hence Bannon and Trump now… Andy’s revenge.

But the core folks are basically putting together a ring of influence that are, without question, up to some nefarious shit. Whether it’ raping children or not, who knows, but the pizza emails aren’t referring to food, and no objective person can read them and think they are. There is a decent amount of circumstantial evidence of not so safe conditions for kids, and a shitload of objective hard evidence of “something” going on that important and powerful people won’t openly speak about.

But honestly, child rape is pretty damn prevalent in our society, and the more rich and powerful the perpetrator, the less the public seems to care until it gets blown open. The Catholic Fucking Church covered it up ffs, what makes politicians doing it sound so crazy?

End of the day, I’m sad about it because if there are that many kids suffering… I just want it to stop.

Yeah, I got really drunk the other night, and watched a bunch of videos. Some absolutely looney fuckers out there making videos. Turned those off. Some pretty rational ones connecting the dots though.

You remember Cortez? Well my understanding is he is 100% convinced it is true, and has spent a lot of time reading up on it. He’s a smart dude, not really into falling for bullshit.

Oh and reddit (who just admitted to editing trump supporter’s posts…) took down the pizzagate subreddit, for what it’s worth.

Sort of makes the whole push to delegitimize “fake news” all the sudden seem a wee bit more nefarious too.

Well, I hope it’s not true. I certainly respect Cortez’s opinion, though.

Whether it’ raping children or not, who knows, but the pizza emails aren’t referring to food, and no objective person can read them and think they are.

I consider myself an objective person. I read a bunch of the leaked Clinton e-mails and honestly didn’t see anything that seemed nefarious. A lot of political plotting but nothing that seemed like they were intentionally putting any lives in danger. I read up on a lot of the pizzagate stuff as well. It requires a lot of imagination to believe that it is true.

I consider myself an objective person.

And still think those emails were referring to food?

I guess the political elites use different grammar than us plebs…

Sort of makes the whole push to delegitimize “fake news” all the sudden seem a wee bit more nefarious too.

That’s ridiculous. If I need to know something, my elected representatives will tell me exactly what I need to think.

If there’s anything that appears to be child molestation or satanism going on in D.C., I’m totally confident that it’s necessary and proper for the regulation of interstate commerce, or for defeating the forces of evil(probably both, as a matter of fact).

I’m not necessarily sure they were referring to food, but I don’t know how we get from pizza to DC-wide child sex trafficking ring

Both have cried wolf and been wrong about enough to lack credibility.

I’m not necessarily sure they were referring to food, but I don’t know how we get from pizza to DC-wide child sex trafficking ring

I’m not sure if these sick fucks use that in the real world too, but on the net, and deep web, they do.

Both have cried wolf and been wrong about enough to lack credibility.

You’re correct. There is also active letter agencies that obviously watch these conspiracy theories for loonies and Tim McVey types. They also inject their own (and foreign governments too) into the fray to push people off the mark.

That’s the infinite rub with Conspiracy Theory. You have to believe in the Psy Op arm of our government, which then influences the theories and proof of them… And worst of all, some of this shit ends up true.

It’s all a giant mindfuck.

It’s all a giant mindfuck.

It is. And combined with common parlance, makes googling up a good place to eat something that can land you on a watch list.

Does this have anything to do with the Jeffery Epstein “Lolita Express” stuff?

Does this have anything to do with the Jeffery Epstein “Lolita Express” stuff?

dunno… I assume it’s all linked.

Pretty good summary of what is known and what is speculation/fiction: 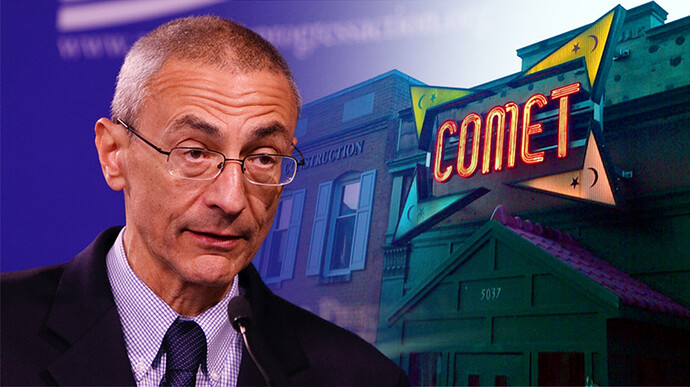 The Real Skinny on #Pizzagate, Podesta and Comet Ping Pong - The Stream

While the rumors flying around are mostly false, it doesn't change the fact that there are some very unsavory characters involved.

Long story short, Podesta is a creepy guy. His brother is creepier and into the occult. The pizza place is a pizza place. They all have really bad taste in art.

But no evidence of any illegality.

National news just came on. Looks like this story has gone way too far.