Tightness - What Stretches to Do? 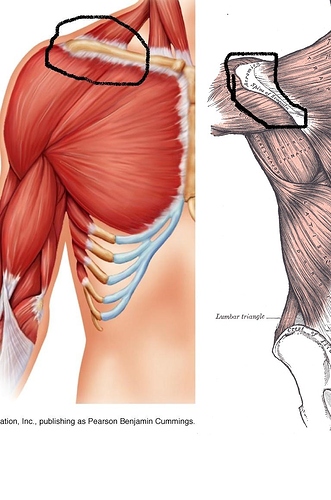 766×1156 159 KB
Hey all, Ive been having some aches in this area and i feel it’s because of tightness in the area, possibly from surrounding muscle groups, i have done doorway pec stretches but that doesn’t seem to help, im already working on mobility and soft tissue work so i was wondering what else i could do, perhaps stretching my lats or would that not make a difference?

I notice it on movements where i have to have my arms to my sides, an example would be bent over lateral raises, i feel it’s causing my clavicle pain and radiating over the whole of my shoulder causing aches and nagging pains, perhaps it’s a simple fix with some stretches, what can you guys recommend?

You are having a lot of pain. Go see someone.

Osteo is short for Osteopathy. Just one of numerous discipline that can help.

Are you trying to get an anatomy lesson with all these questions?

[quote]JFG wrote:
You are having a lot of pain. Go see someone.

Osteo is short for Osteopathy. Just one of numerous discipline that can help.

Are you trying to get an anatomy lesson with all these questions?[/quote]

Nope, just some suggestions, already trying to get treatment but the healthcare has been… let’s say not that great. I will suggest Osteopathy to the doctor on wednesday and see what he says, he’ll likely say let’s wait 3 weeks for the x-ray results although it is obviously a problem with tendons not bone.

But with this problem, i feel it’s quite minor and some stretching will solve it, so i was hoping for any suggested stretches to get into that area, cheers.

It could be your neck, shoulder, biceps, triceps, all your upper back muscles.

Minor pains become major hassle over time. Do something about it now.

Osteo is only one of many. ART, physio, rolfing, etc

Had physiotherapy in the past and been to Rheumatology but no luck with knees and other problems from the physio but going there for SIJ pain. Haven’t heard of rolfing, but yeah would still like some stretches to try out to stretch that area.

[quote]Cprimero wrote:
Get some ART[/quote]
x2 its great stuff. You need to see a professional not just stretch

Do you do any foam rolling?

Do you do any foam rolling? [/quote]

Upper traps was my guess too. When I shrug more than 2x per week, my clavicles ache there as well.

Do you do any foam rolling? [/quote]

And I didnt even touch the ligaments…

If you are already going to the doctor I would try to just get to a general physical therapist. They will be able to tell you what is causing the pain and will probably point out some obvious mistakes you are making. If it turns out to be something other than muscular imbalance/overuse/tightness (which is the most likely case) they will also be able to tell you that and you can go from there…

And it should go without saying… but avoid exercises that aggravate it for the time being.

Two things that may help. See if you can try to stretch your pec minor. And hit your lower traps.

But nothing’s gonna work as getting pro help.

Thanks all. Yes been foam rolling, and working on lower traps and pec minor stretches, but haven’t had much luck as of yet.

have you tried using a tennis or lacross ball around that area? find any trigger points?
how about around your shoulder blades at the back?

how is your internal and external rotation? do you do rotator cuff exercises and face pulls?

do you do rowing to balance your benching?

if your joints are hurting and you can’t figure a way to use the muscles to spare the joints then i really would get to the doctor. check to see that your bones are okay. MRI would probably be a good idea if you can get one. check the cartilage is okay, too.

Yep used a tennis ball there. Some trigger points at the upper pec area and where the clavicle inserts. Rotator cuffs normally hurt with a tennis ball as im sure most peoples will. I think the right arm is slightly worser than the left, probably because im right handed and do things like use the pc mouse with my right hand.

Internal rotation i don’t feel is too great,external feels fine, i have done external rotation drills before in the past, db externals, cuban press, but didn’t seem to help. Face pulls i currently can’t do at home but have been doing a lot of alternatives.

Have been doing plenty of rowing as of late but nothing too strenous right now.

As far as i know things like Vitamin D, Iron and platelets are low, was given supplements for those but it hasn’t solved the problem, knees is definitely a tendon issue but these shoulders i can’t make out, im sure it’s more a case of something pulling on an area and perhaps something like that.

Would doing lat stretches make a difference? It seems every doctor i go to doesn’t have a clue, probably because they don’t treat athletes and probably think im making it up, why would i?

You know what guys, im thinking these shoulder issues could be related to my elbows, more so bicep tendons? I don’t see how they would of been injured as i didn’t notice it after a certain movement or anything like that, but here’s an example of how it plagues me in day to day life. Yesterday i was giving my cousin a piggyback, so from that position you can see the elbows have to be bent to support the person more.

Now my back was taking the weight so that wasn’t a problem, but holding her in that position was really incredibly painful for my elbows, the inner part which is biceps tendon. I don’t see how this could happen, but perhaps it’s the cause? Don’t think it could be ruptured and needing surgery but who knows.

As a test if i were to do curls with a light weight, more specifically, i did reverse curls to help strengthen the wrist extensors and just the empty bar - 10kg would hurt my left inner elbow significantly so that id have to stop.

See a good doctor if you can. If you just ignore this, it’s likely to get worse.

Some people get AC pain from sleeping on their side. If that is the side you sleep on then stop for a week and see.
stretches can work better for that area sometimes if you put your arm behind your back and have something pull down and across your body.
Dont ask your Primary Care Dr. Go see an ortho. Get copies of the xrays and take them in with you.

Is the pain sharp or dull? Does it shoot up your neck or down your arm?

Hey guys i appreciate the effort to help, just seen the GP and i am getting tired of their bullshit. They aren’t prepared to help me at all and im hitting a brick wall with them, this is the 3rd different GP i have seen now and none of them are willing to listen.

This thread is about mostly my shoulder so will just go into that, but here’s the thing, i said i have pain in my inner elbows and i know the tendon goes up to the shoulder so im thinking the problem could be tied in there, but he said, “just rest and take ibuprofen”, the favorite line of the doctors. I have been resting for MONTHS, it is NOT getting better, only worse.

I don’t have arthritis he says, which of course im pleased about, but this isn’t getting anywhere. I have had chronic cervical spine pain and weakness for about 6 months now, 2 x-rays some physio strengthening exercises but NOTHING. I have tried stretching, nothing.

I even said if i could see someone specialized and suggested possibilities of orthopedics, osteopathy, but they didn’t want to know, just shook his head and said, reduce the weight at the gym and rest - i even said i haven’t been to gym for months to rest the issues and it’s like it goes straight over there head, really frustrating getting up extra early to see them and they tell me the same fucking thing over and over, rest and ibuprofen.

@Tveddy, i have been sleeping on my side more recently as i find it more comfortable, but i even went out of my way and bought stuff like a memory foam pillow to help support my neck better, but not much change, although i notice it if i don’t use the pillow. I have been doing more posture friendly stuff like putting a pillow between my knees when on my side, when on my back, underneath, it’s just i feel im not getting anywhere.

The pain is a dull nagging ache, id say it goes up my neck as i can’t think of another cause, causing this neck pain.

Id love to see a chriopractor, osteopath, orthopedics specialist’s, but i just can’t afford to go private, im really not making excuses, if i could afford it, id be there in a flash. The doctor just shaking his head to these suggestions was so frustrating. Im pretty confident i have bursitis in both knees, which Ive had pain for, for about 4 years, i suggested an MRI, and he said, what do you think the MRI will show, and i said signs of inflammation and before i could continue he said, inflammation, just take ibuprofen. Im fucking sick of hearing the word ibuprofen, Ive been practically living off this shit for the past 6 months, even the box says don’t take for more than 2 weeks if you don’t get any better, see a doc.

I have just over Â£90’s in my bank account and i still have to pay bills to live, i have been unable to work due to these problems as working causes pain and just makes things worse which im worried about, so im really struggling in more ways than one, i just don’t know what to do it’s really disappointing and upsetting to be fair. The neck pain is unbearable

Dull pain in the neck going down your arm COULD be indicative nerve entrapment. The best idea is unfortunately to see an Ortho. If thats not an option I would read as much as I could about nerve entrapments as well as AC impingements and then try to make your own informed decision. If you believe you may have a nerve entrapment you can look up brachial plexus nerve flossing. There are some good videos on youtube of how to do the exercises and while the results vary there aren’t really any downsides that I know of.
here is a good place to start Shoulder Disorders