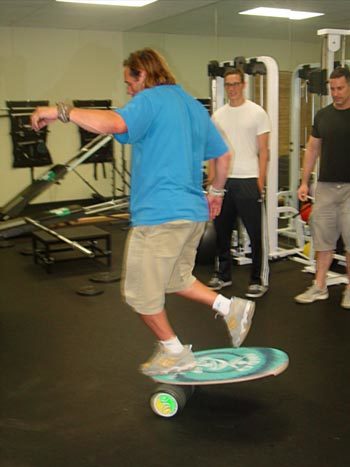 Starting like that it should be quite an action packed issue. Anyway I nominate Coach D’ for the next round of “Beat our Caption”

My Caption;
“This year the organisers of the World Air YoYo Champonships decided to introduce a physical challenge”

It all started with the words: “Yeah… well I double dog dare yah!!!”

Coach D gets his groove on to “Walk like an Egyptian”

You guys should be ashamed of yourselves, making fun of Coach Davies especailly you Diesel going on Coach D’s forum saying Yea to the “Code” and then coming on here doing the exact opposite of what the “CODE” means!

Coach Davies puts a lot of time and effort into these forums and writting in this magazine and his own that is free for all to read. Okay, I am going get my flame gear on and getting ready to get flamed for the comments I made.

The Coach is renowned far and wide for his sense of humour. Actually I just made that up. Hope he doesn’t mind.

“I lost the wheel on my skateboard.”

Come on fitone, were just having fun, not trying to put the guy down. To put this down you would have to put down the whole Beat Out Caption idea on T-mag. Also I believe he meant attacks, not having fun with each other. There is a difference between a little ribbing and attacks.

Although I was going to start a forum version of Beat Our Caption, and I was beat to it. Oh well.

“Which way to the bathtub?”

“Look it works better than a bannana peal see.”

They aren’t making fun of Coach D! Just the pic. I would bet he is getting a kick out of the captions too! It isn’t like they are flaming him or his work or anything. Even if they were Coach D wouldn’t let it offend him. You shouldn’t either.
In faith,
Matt

“I’m a little teapot short and stout, here’s my handle here’s my spout”

Huh? Fitone, I wasnt aware we were poking fun at Coach D.

I thought it was all in good intentions. Coach Davies has my UTMOST respect. If putting a funny caption next to his picture is offensive I take it back.

I should also note that article made me read every single article on th Renegades which I started to incorporate right away. Needless to say it’s brutal and I feel great. Renegade is THE way to go.

Why dont we let the original poster come forward and explain what the intention of the thread was? It never crossed my mind he meant to make fun of Coach D., and quite honestly I think you might be blowing it out of proportion.

Still, Ill give you credit and retreat from the thread.

Oh and by the way, I’m expecting both Indo board and Coach D’s latest book sometime this week.

Fitone, good thing you are ready.
Lighten the fuck up Jackass.
So the code is about not having fun with a funny picture? Some life philosophy, that’ll change the world.

I want one of those indo-boards really bad.

I know it would help my lateral stabilization since my surgery.

That’s the best caption you could come up with, Brad?

“During the economic recession, Coach Davies was only able to afford half a skateboard”

Fit one – I recall one of the COACHES repeatedly breaking “the code” on that thread.

Dude the chicks will totally dig this man. Surfs up

My trainer said it works better than a swissball.

In response to Diesel’s suggestion I will clarify that this thread was intended only to be good clean fun. Was that necessary. I dunno but I hope fitone doesn’t lose any more sleep :).

“This should be done in a squat rack.”