that looks like alot of weight to be real

With how shitty that guy’s camera is there’s no way to tell. 595 for reps on the BNP on a smith would be a LOT, though. And a surefire way to do damage to your shoulder capsule.

[quote]buffalokilla wrote:
With how shitty that guy’s camera is there’s no way to tell. 595 for reps on the BNP on a smith would be a LOT, though. And a surefire way to do damage to your shoulder capsule.

I have no idea if the video is real or not (although the guys forearms certainly look big enough to indicate some serious strength), but that’s not a Smith machine.

That guy who commented about the bar bending had a good point.

The bar bends more than that when it’s racked on a bench, and his hands aren’t that far out.

That’s either one hell of a bar, or there’s something else holding that weight up.

Someone should submit that to Snopes or something and have them check it out. 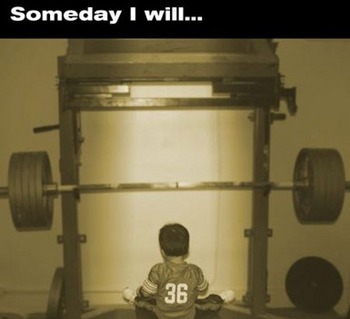 Check out this bar (picture courtesy of EliteFTS.com).

The bar looks thicker than the bar in the video, and looks like it’s bending slightly more, and it’s just sitting there, plus the hooks in this picture are out a lot further than the guy’s hands in the video.

They usually bend a little more when being lifted.

I don’t know, maybe I’m just jealous, but I usually like powerful videos and get motivation from them. This one just looks shady.

It looks like they looped the video. Look at the way it pans to the left a few times.

This is posted on a japanese forum. I’m not saying it is true. But they claim the video is of him pressing 220kg (485 pounds).

—The feature in his training

Not a chance in hell thats real. The second rep you can see the discrepency. The rep is much faster than all of the other. He’s trying to time the reps to coincide with the support the bar is receiving and thats why its so controlled. They’re using invisible wire most likely. I dont think the plates were added post production. But no way that real.

Ya, not a chance this guy could that, and it seems easy to him. Not only is the bar straight, but consider that few people could power jerk that amount, let alone rep out overhead like that.

[quote]Bauer97 wrote:
I have no idea if the video is real or not (although the guys forearms certainly look big enough to indicate some serious strength), but that’s not a Smith machine.[/quote]

Holy cow, turns out it wasn’t the video, I had to reinstall my video drivers.

Woo, that was embarassing

I think it is fake. If you notice he’s not turning red or showing any signs of discoloration along his neck which would indicate straining. Also I don;t think they have it wired, but the iron really might be aluminium.

It just looks way too controled to noe be fake.

Why would an absolute monster like that feel the need to make a fake video.

If that is 220kg, and the fact he isnt getting that much depth, I can believe it.
The bar isnt bending much, this is true, but it IS bending, perhaps as much as a really stiff bar with 220kg would.

just something to look at in the mirror in front of him you can seethe bar protrude through the plates but when the camera pans to the left there is no bar protruding as a matter of fact it is very blury like it was altered. …no way is this a un altered video

Im guessing it is just because of the intense amount of weight, and how well and controlled hes doing it. Anyone know the record for that?

Yes… a unknown japanese does controlled, seated overhead presses behind his head for more than the Pyrros Dimas jerks…

Am I the only one that thinks a 370kilo or 814+ deadlift for 10 reps is absolutely incredible?

Even if that represented 80 percent of his one rep and he could rep it ten times, he would pull over a grand.

That deadlift figure is bullshit. Andy Bolton recently pulled 362.5 for 8 and he’s looking good to be the first man to break 1000lbs in November. No way this guy can pull 370 for 10.

Exactly thats better then Andy Bolton recently did for reps.