THINK YOU'VE HAD A BAD DAY? 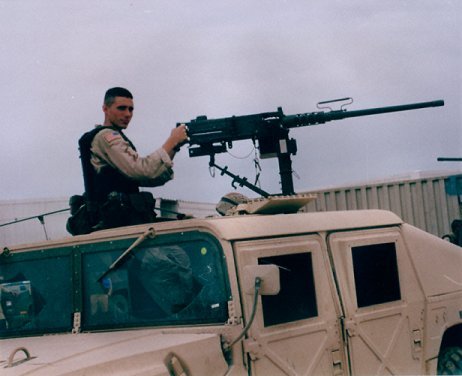 1993, mogadishu, somalia. You’ve probably seen the movie, and know how horrible that day was for any of our special operations forces involved.

was when he said, ‘Watch CNN very close.’"

Calvert continued to receive letters from him every day.

“I kept waking up all night long. I sleep in the corner of our tent. I must have rolled over and stared at the stars for hours. There are a few times in a person’s life that really makes them think. One of those being when you think it may be your time to go.”

The on September 26, seven days before he would be killed, he wrote:

“Yesterday was probably the coldest, darkest, saddest day of my life. I stood at attention, rendering a salute as three American soldiers were rolled by in humvees, in caskets draped with American flags. These three men being the ones killed in action on Friday night. I stood by and watched as tears began to form in my eyes and the eyes of my fellow Rangers. We all felt a warm spot in our hearts for those brave men who gave their lives for God, country and his fellow American brothers and sisters, believing what they were doing was right. Not only does my heart go to these men, who made the greatest sacrifice of all, but their wives, children and loved ones. I
feel for them the most. War is very sad and kills everyone in some way. I can’t help to think if it had been me in one of these caskets.”

In his last letter to Calvert, he perhaps sensed the final outcome. On the morning of October 3, he wrote:

“Somalia has forced me to wake up and take a hard look at my life. It has made me change a lot of my views. Most of all I’ve learned that there is no better time to say what you are thinking than right now. Because you may never get a chance to say it.”
Calvert said she is not sure if she will see the movie because she said Kowalewski’s death was horrible.

According to the Bowden book, Kowalewski was driving a Humvee when he was
shot in the shoulder. He absorbed the blow and kept on steering.

“Alphabet, want me to drive?” asked Pfc. Clay Othic, who was seated in the
front seat.

Bowden writes, “Othic was struggling in the confined space to apply pressure
dressing to Alphabet’s bleeding shoulder when a grenade launcher rocketed in
from the left. It severed Alphabet’s left arm and ripped into his torso. It didn’t explode. Instead, the two-foot-long missile was embedded in Alphabet’s chest, the fins protruding from his left side under his missing arm, the point sticking out the right side. He was killed instantly.”

No crap. I have a friend that was a Ranger there and the movie was very close to the real story. I guess my day was O.K.

A business associate was talking with a friend of his in California a while back, praising the movie Blackhawk Down.

Monical Lewinski was bad, but WHY was THIS not a good enough reason to impeach Clinton?