For years, Plazma has been my go-to workout drink. That’s over. I’ve switched to something even better. Here’s the story.

When Biotest CEO Tim Patterson told me the new Surge® Workout Fuel is better than Plazma, I thought, “That’s a big, bold claim that’s a little hard to believe.” But I’ve known Tim for 20 years, and his word is gold to me. So I was excited to learn more.

Tim said, “It’s the best workout formula I’ve ever made, and not only that, it’s 33% cheaper than Plazma. We’ve switched several of our athletes from Plazma to the new Surge® formula, and they’re all seeing increased gains, faster recovery, and significantly greater work capacity.”

Tim added, “Each Surge® serving contains 5 grams of L-leucine, 270% more than Plazma, plus it provides two additional power ingredients not in Plazma: 2 grams of beta-alanine and 1.5 grams of malic acid. The formula is so loaded with science-backed ingredients that there’s nothing you could add to make it better. We use calibrated electrolytes to engorge muscle with nutrient-dense fluids, stimulating maximum protein synthesis and fueling elite-level work capacity. And, Christian, I want you to be the next one to test it. I consider you the most qualified to compare the formulas and evaluate which one performs the best. And I want you to go public with your verdict, regardless of the outcome.”

Despite the enormous task and responsibility, I was excited to get my hands on the new Surge® formula. So I sent a copy of the label to my diet coach to let him know I’m making the change. He immediately texted me, saying, “That’s a perfect workout supplement.” 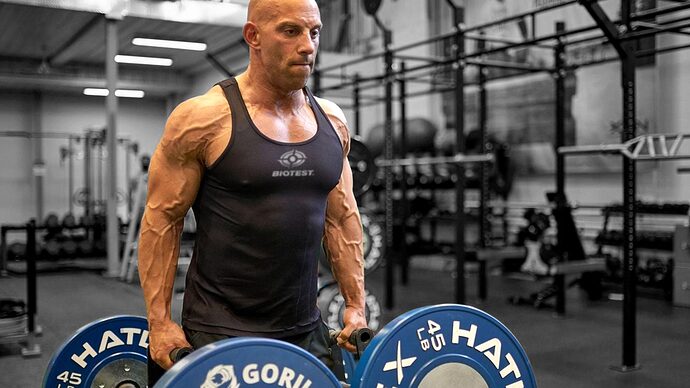 Here Are My Test Results

I’ve been using the new Surge® formula for five workouts and can make the following observations: 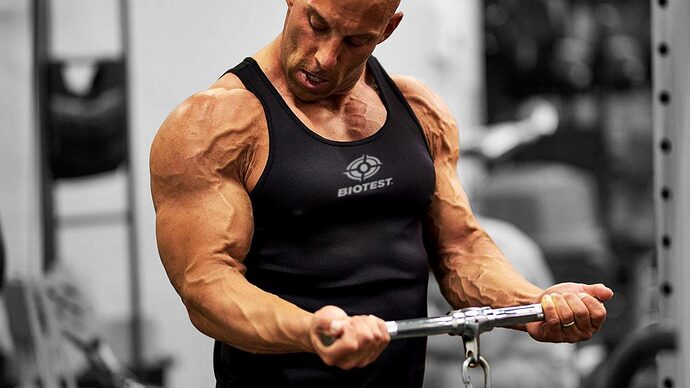 I’ve been a longtime Plazma user, so I believe I’m qualified to compare it to the new Surge® formula. Plus, I know Tim Patterson wants my honest feedback, either way. So here’s my objective assessment:

Surge® Workout Fuel demonstrably outperforms Plazma, and it should be evident to anyone who uses both supplements. It makes such an improvement in performance and gains, I won’t train without it — and neither should anyone serious about lifting or competing in sports.

Regardless of your fitness goals, I believe Surge® Workout Fuel will get you there faster and take you farther. And it outperforms Plazma at 33% less cost.

I’m also developing new training methods to take advantage of the surge effect. So sign up for the T Nation newsletters for update notifications. 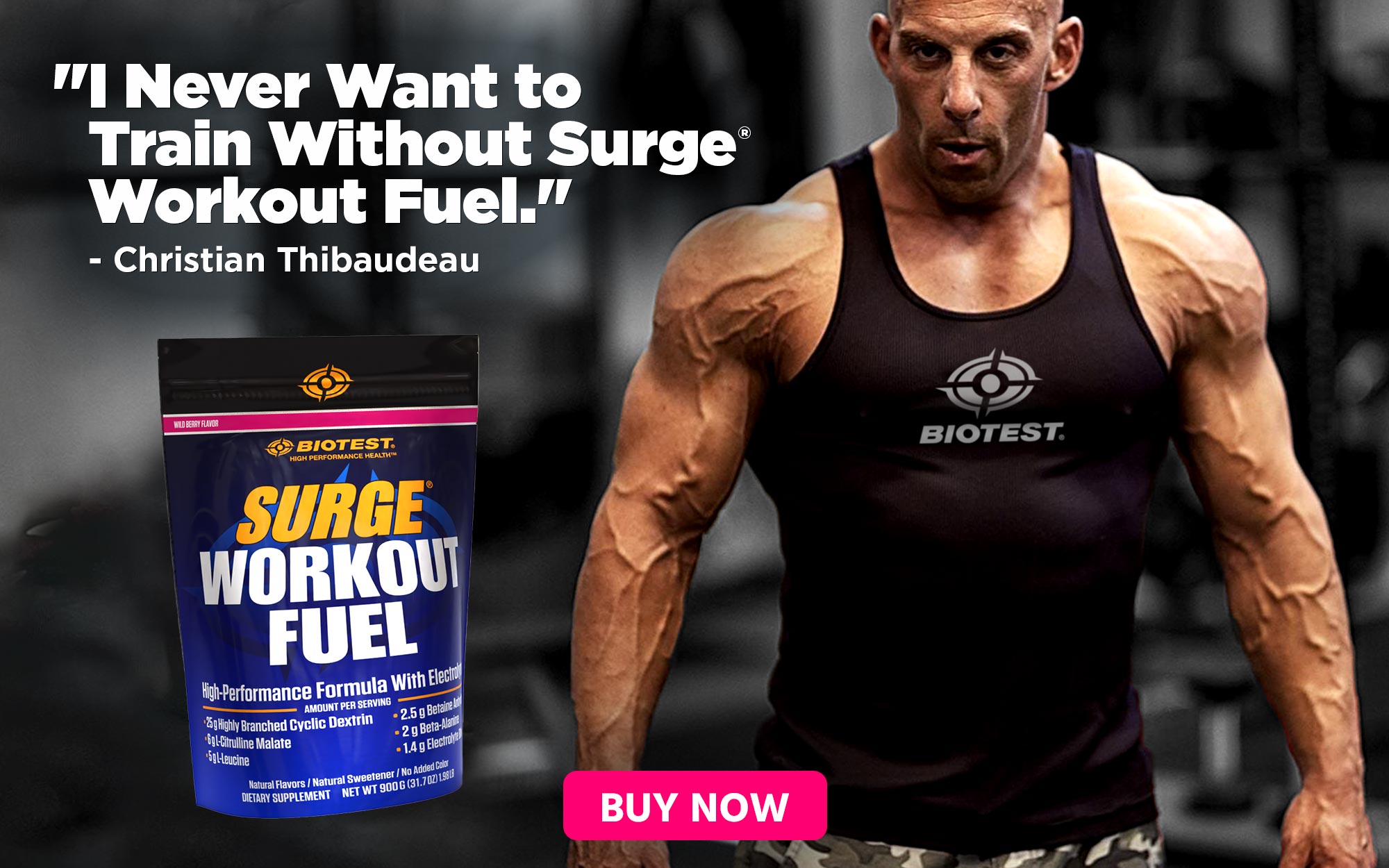 2.5 lbs in 5 workouts?According to your recent article on steroids you claim it’s almost impossible to gain more than .25 to .5 lbs per month.

So sounds like a good blend - not sure of why malic acid other than for tart flavour? Can’t find any research on that one in the context of hypertrophy or recovery for humans?? thanks for the pointers
m.c.

What’s to become of Plazma, then? And will the V-Diet include Surge now? No protein in the formula?

Yes, that would mean gaining an average of 0.5 lbs of lean muscle mass per workout. I don’t think this is possible and may just be a mistype.

IMO, it a folly to believe this is linear. It might be more like a one-time step.

Yes, that would mean gaining an average of 0.5 lbs of lean muscle mass per workout. I don’t think this is possible and may just be a mistype.

I believe he said somewhere else that this occurred while he was coming off of the carnivore diet. If my memory is right, then the weight is probably just the result of the carbs.

I think, that is mostly water, but inside the muscle tissue. This would also explain the pumped feeling.

You are correct.
I come here to mostly read CT, but he sold out on this one. Disappointing.

I am curious as to why this product was discontinued previously and then brought back? I would have thought that with the level of effectiveness we are told it has, it would have never been taken away. Confused?

I thought I would throw out some personal data, for what it’s worth (n=1).

I started the Surge Challenge from its onset, and made some gains in weight (It should be mentioned that I was 73 years old when it started) 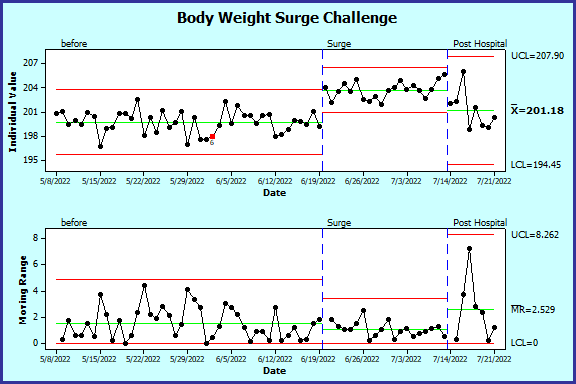 I was hospitalized (7/10/2022) with an infection in my calf and a blood clot. Prior to the Challenge my bodyweight was 199.7lbs (average). While I was well my average weight was 203.7lbs. That was a 4lb average gain. It looks more like a step increase than a linear increase.

When in the hospital I was prescribed Eliquis for my blood clot. My weight fell to 201.8lbs. Here I was discouraged, but continued the Surge. I really liked the better feeling working out, but my weight never seemed to recover to its Surge level.

I kept tracking my weight daily, and about a month ago I noticed it began to increase. I related the increased to stopping the Eliquis, though I have no idea if it was the cause. This next chart delineates my time on Eliquis to stopping Eliquis. 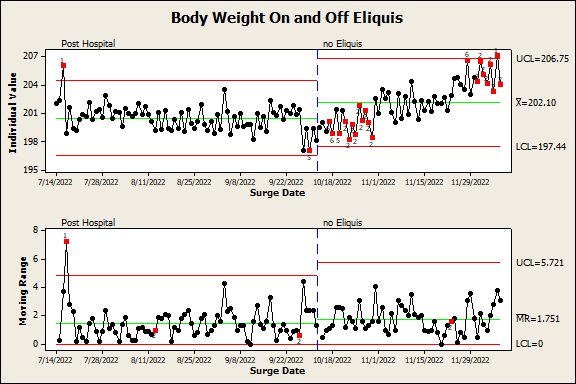 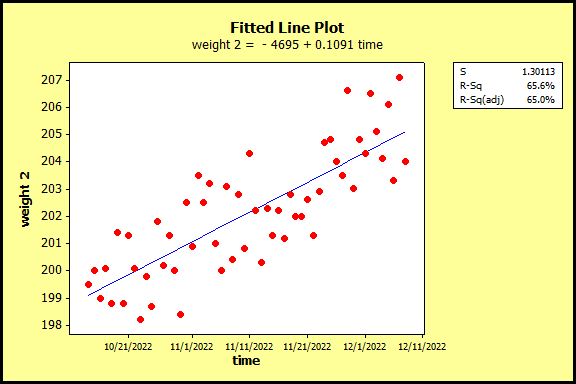 Here we see my weight has risen from 199lbs to a little over 204lbs in a linear fashion over 56 days, or about 0.63lbs per week. I have no idea how long this will continue.

There is no certain conclusion to be made here, just some data to think about.

I am curious as to why this product was discontinued previously and then brought back? I would have thought that with the level of effectiveness we are told it has, it would have never been taken away. Confused?

I don’t think Surge Workout Fuel was ever discontinued. My understanding is it was out of stock while being reformulated and that this is the new, updated version.

Surge Recovery was discontinued, but that was a different product.

How is that lean mass?

No protein in the formula?

My understanding is the L-Leucine has you covered.

Well, it isn’t what I think of when I think of gaining muscle (this piece – I’m not going to call it an article – is advertising copy). But technically wouldn’t a bodyfat test count water weight as lean weight?

Maybe but, if someone tells me they put on 3lbs of lean mass I think of “3lbs of lean steak” was added to their body.

I’m sure you’re right. T-Nation/Biotest singularly has my trust amongst supplement companies. Still, even the addition of a cheap protein (why concentrate) couldn’t be wrong…something for the carbs to drive into muscle tissue during the workout.

No matter! I add stuff and mix my own supplements together all the time!!!

Malic acid and similar acids (e.g. citric acid) act as intermediates in the Krebs Cycle (AKA Citric Acid Cycle), so they help provide energy while working out. Also, they are acid buffers within the body (even though they are acidic outside the body, they are basic (non-acidic) inside the body) and help to counteract the negative effects of the acid that is produced within the muscles during high intensity exercise and also from higher protein diets (for which all that acid from the protein needs to be buffered). Because of this, they help you do more reps and work before tiring.

As a side note, fruit acids act like fruits and vegetable in that they help the kidneys buffer acid from protein intake (which helps protect kidney health long term) and therefore protect from muscle loss and bone loss (because the body would otherwise break down those tissues to buffer the acid). They are antioxidants as well, and of course they are also flavoring agents.

But is it better than the old Biotest Anaconda? That was amazing and maybe it can make a comeback if the ingredients are cheaper now. iirc it’s main problem was the raw ingredients were super expensive