The Wendler Row for Traps and Upper Back

A New Exercise You Need

Need to build some real beef back there? Do the Wendler row or the T-bar shrug. Here are two ways to do it, both awesomely effective.

If Traps Are the New Abs, Then Do the Wendler Row

Nowadays, having big meaty traps can make you as sexy as having a chiseled six-pack, which means building them is a sought-after training goal. But why is that?

My first theory is that CrossFit (and athletes in general) have a lot to do with it. A lot of serious lifters now want to look like athletes. CrossFit has made that trend even more popular and has encouraged more people to do deadlifts, cleans, and snatches (for better or worse).

Or Maybe Traps Are Just Sexy?

Maybe a better reason was highlighted in a recent study. It gave women shirtless pictures of male torsos, and they had to rank them in order of attractiveness and perceived strength.

Not surprisingly, the more muscular physiques were seen as a lot more desirable than the less muscular ones. In fact, none of the skinny or fat torsos received ANY votes for being attractive. (More info here: How to Attract Women, Even If You’re Ugly).

The cool conclusion? It was the impression of strength that made the greatest impact on how desirable a male physique is. If a body looked strong AF – even if the guy wasn’t super lean – he was seen as desirable. And nothing screams “strong” like big traps.

I’m always on the lookout for new and effective trap exercises. I thought I’d tried everything, but I learned a new one from Jim Wendler and it’s quickly becoming my favorite.

While I call it the Wendler row, Jim himself would likely call it the T-bar shrug. Regardless of what you call it, it’s a superb exercise. 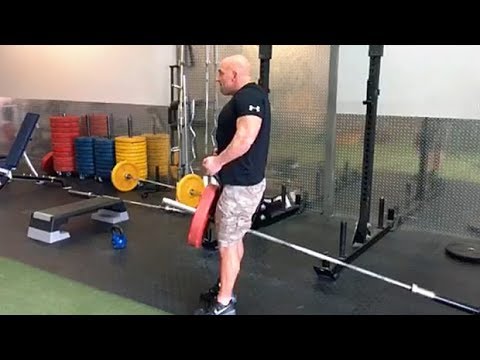 Because of the line of pull, you’ll hit not only the upper but also the middle fibers of the traps, which will give you “height” and “thickness.” These characteristics give you a much thicker torso and also give you better leverage when bench pressing. They’ll help keep the rhomboids and upper back tight when pressing.

It’s a pretty straightforward movement. Using the landmine/T-bar set-up, and ideally, a parallel/neutral grip, stand upright and row the weight up, initiating the movement with a shrug. It’s not a pure shrug because you’re pulling with your arm (bending at the elbow joint). That facilitates a better trap contraction.

It’s best to keep your elbows pointing back, which is why I use a neutral grip. This allows you to recruit the middle fibers more effectively and prevents internal shoulder rotation, which you should avoid when training traps.

You can even do a form of mechanical drop set by changing the angle of the torso during the set. As you get fatigued, you can lean back a bit more and that’ll allow you to get a few more reps.

I go fairly heavy on these, sets of 6-8 reps, but with a 2-second hold at the peak contraction. I do these twice per week as my third exercise in a session, but it’s mostly because my main goal is strength. Those who are more into pure bodybuilding should shoot for sets lasting 40-60 seconds under tension.

So for hypertrophy, you could do:

All of these put you in the ideal hypertrophy zone for a targeted exercise. I also use a variation of this exercise with a pulley station. It’s a slightly different stimulus but works equally well. 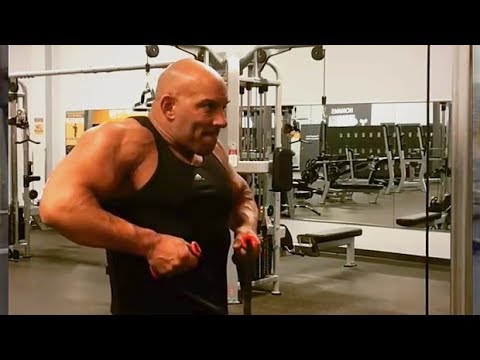 Give it a shot. It’s an awesome way to get a thick upper back.

This is awesome! Thank you sir! Question: can you perform these on a t-bar row with a standard cable row attachment? I do not have the ability to grip it like you do in the video. Thanks!

Yes absolutely. I use all kinds of grips. I even do it on a pulley with a mag grip (did that this morning).

Absolutely love this one, done with a T-bar.
Beats my old shruggs by far!

I’m definitely going to try this one! Thanks!

very similar to something that Paul Kelso recommends in his 2013 book. He called it “the shrug-row”.

I used Kelso’s variations and don’t feel it as well as this one. But it might still be a great exercise for some

I love such exercise! The first time I saw coach Paul Carter doing it with the T-Bar.

That’s a great shrug variation. I was just playing around with holding the handles behind my back, like a Haney Shrug. It feels like I get more ROM.

From the movement patern looks like in a pinch you can use dumbbells as well?

Sure, as long as you execute the movement the same way. I think cables and a landmine are a bit more effective, all three having a slightly different resistance profile, but it really is minutea that is likely to not be significant from the point of actual muscle growth.