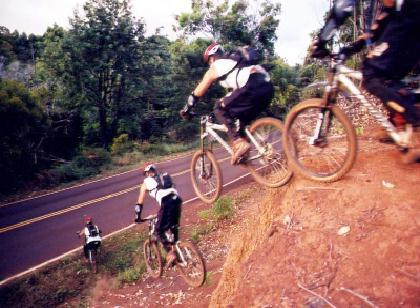 Not really workout related but a pretty cool pick all the same. This is one reason I workout, so I can absorb impacts from drops like this and bounce off the ground if I crash. Muscle makes the best armor, although body armor definitely helps saves skin. If you’re a t-mag dude who hasn’t tried mountain biking you’d probably love it, especially the downhill/ freeride side. Besides the adrenaline rush you also get one hell of an aerobic workout. Anyways, just a random thought on a lazy Sunday afternoon…

That looks pretty cool bud. I used to go mountain biking a lot until I read about the effects riding has on your dick. I guess I need to get one of those ergonomically designed seats for myself. By the way how high are you dropping from anyway? I think my bike would fall apart if I took a jump from that high (it ain’t much of a bike).

What? No 360 or no handed landing??? Just bustin your balls. Great picture you look smooth. And I agree, lifting has totally improved the way I suck up my landings.

Just curious about one thing. I have heard that all montain bike competitor grill a joint before starting a race…what`s the deal? To countereffect the adrenaline rush?

(I have never smoked pot, so I have absolutely no clue as why it is so widespread in high danger situations. I do know of its usage in more casual - party - situations. ) 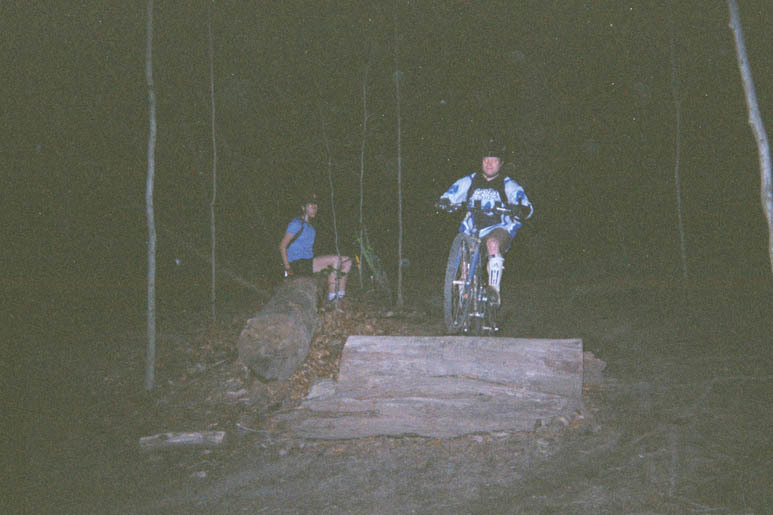 I have heard that all montain bike competitor grill a joint before starting a race…what`s the deal?

Where in the hell did you get that idea? I know dozens of Mtn. Bike racers who, to my knowledge, don’t smoke weed.

Some burn before a race because it “helps” them focus. As far as I know, I dont think this is restricted to mountain biking. I’ve seen it in hockey, basketball, and downhill skiing. It may give you a bit of focus but what you gain in focus, you lose in endurance. Some fellas i freeride with smoke the fats. Personally, if i’m 10ft in the air on a skinny (log) or doing drops, I like to be fully in control of my mental capacities.

I guarantee you there are VERY few hockey players smokin weed before a game.If they are, they’re morons.