The Next President of the United States: IV

Did anyone ever think that Trump was REALLY a Republican…or even a Conservative?

The sad part of all this for me is that close to 60%…60%!…of Americans will not only dislike the President…they will HATE them…(either Trump or Clinton).

Did anyone ever think that Trump was REALLY a Republican…or even a Conservative?

The sad part of all this for me is that close to 60%…60%!…of Americans will not only dislike the President…they will HATE them…(either Trump or Clinton).

Their own fault. Refuse to nominate and support sleazebags (Trump and Hillary).

That’s what you got out of that?? Not the twitter rant of a child, polls showing him losing, the electoral map that is slamming the door shut, or the election prediction above 80% probablitly?

Not everybody has WSJ access so I posted CNN, this better? 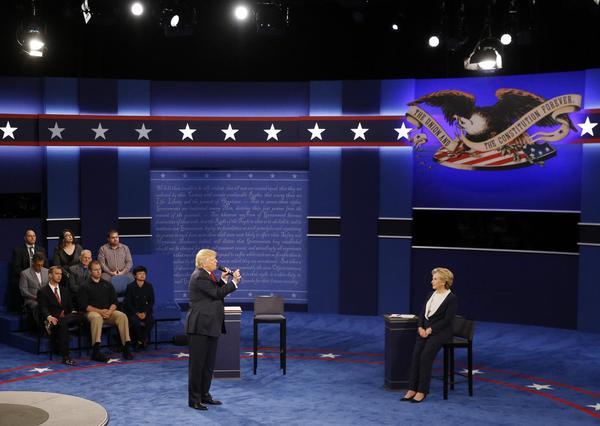 Donald Trump's gutter talk about women shows yet again that he is bad news. The problem is that Hillary Clinton is far worse. Trump's talk is indefensible. But Hillary Clinton's actions as Secretary...

Ya that can’t happen. I’m still hopeful as of right now.

Nothing comes to mind in either case, I’m sorry to say. I read just what you did about the Gladiator ABMS – Fox picked it up from a US intel source. A message to the West in the wake of the formal dissolution of talks. But it’s entirely possible that he could be assuming he’ll need them. Yesterday a member of Putin’s inner circle alluded to the possibility of imminent nuclear war. We said today we’d punish the Russians for hacking. I expect more confrontation on every front in the next few months, including by way of proxies in Syria. The more we grind ISIS down, the more comfortable we will be threatening Assad’s goons.

As for the Afghan military collecting money from us for phantom personnel, this is the first I’ve heard of it. There was a similar story about the state police force a while back. Yet another example of the infinite opportunities for enrichment presented by war to people who otherwise would spend their time watching livestock roll around in dust.

I’m not sure we can keep him out of former USSR countries.

Article 5 of the NAT trumps all this, which is why we must stop it from getting Trumped.

I’ll see myself out.

But really – a strong and unified NATO will keep any rational actor out of the Baltics (and deterrence of rational actors is what NATO is first and foremost designed to achieve).

No one with a brain, anyways.

Ya that can’t happen. I’m still hopeful as of right now

If it does expect a completely morose, “I told you so” from me. Which I will take absolutely no pleasure in.

EDIT–Not “you” singular, usmc. “You” as in the world at large

It’s nice to blame him but isn’t it ultimately the voters who are responsible? 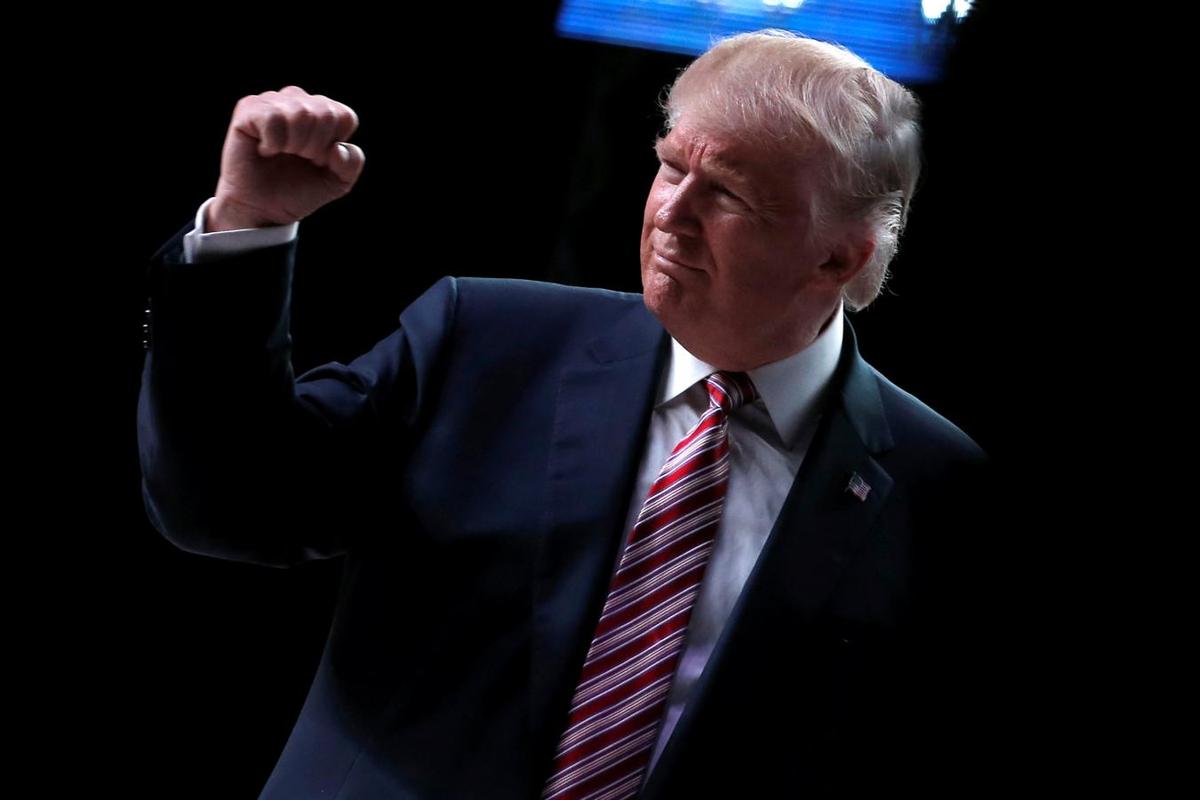 Republican presidential nominee Donald Trump lashed out at U.S. House Speaker Paul Ryan and other "disloyal" Republicans on Tuesday and vowed to campaign in whatever style he wants now that the party establishment has largely abandoned him.

What do you think Paul Ryan is going to buy with his 30 pieces of silver?

Dignity and self respect.

What are you belly aching about? I understand that you understand next to nothing about international relations, but it’s considered a big deal when an adversary uses its intelligence services in an attempt to affect the outcome of a presidential election. And make no mistake, a Trump presidency would be a geopolitical windfall for Putin and a revanchist Russia.

What do you think Paul Ryan is going to buy with his 30 pieces of silver?

I think Paul Ryan betrayed no one except the principles of the Republican Party and the moral underpinnings of the U.S. when he gave support to Trump, however begrudingly.

Trump is not a Republican. He never was a Republican and I strongly believe that, if he is elected this November, he will show everyone just how little he cares about the Republican Party and whatever conservative ideals he supposedly espoused during this campaign.

Heck, I’m pretty sure the man will turn on the white nationalists who probably form the core of his support now as well. He already hinted his willingness to do so if it suited his ends.

And that’s why I’m actually willing to see a Trump election, if nothing else than to see him completely fuck over the Republicans who seem to think that he’ll actually nominate a conservative judge for the Supreme Court.

That will be HILARIOUS.

Trump is not a Republican. He never was a Republican and I strongly believe that, if he is elected this November, he will show everyone just how little he cares about the Republican Party and whatever conservative ideals he supposedly espoused during this campaign.

And that’s why I’m actually willing to see a Trump election, if nothing else than to see him completely fuck over the Republicans who seem to think that he’ll actually nominate a conservative judge for the Supreme Court.

If I were the all-seeing power, I’d love to know what percentage of people that voted for Trump in the primary are actually long-standing identified “Republicans” versus first-time voters and/or defectors from the Democratic side who slid over just because they wanted to vote for Trump.

At this point, we have to believe that Trump voters fall into three broad categories, right? One, the NeverClintons who will vote for absolutely anyone but Hillary. Two, the “I-don’t-like-Trump-but-conservative-Supreme-Court-Justices!” group. And three, the white-nationalists who love coming out to a Trump rally because it means they might get into a good old-fashioned fight with a protester or if they’re really lucky, maybe they’ll get a chance to spit on a black person and blame them for Obama! Group three also contains, um, this person: In the age of Trump and online conspiracy theories, one woman’s journey to belief.

The first group and second group are mostly true-red Republicans. The third group is mostly people who could care less about “conservative ideals” or anything else that the Republican Party has traditionally stood for; they just love Trump because Obama is a gay Muslim from Kenya who founded ISIS, and Donald says he can beat ISIS and send the immigrants back to Mexico, so yeah!

What I’m honestly not sure of is about how big, proportionally, those three groups are. The third group will probably love him no matter what - even if their shitty lives remain shitty because DJT couldn’t deliver on any of his campaign promises, they will go on believing to their dying day that it was all a conspiracy against him. The first and second groups already find him distasteful but their final judgement will depend on, as you said, whether he does what they’re hoping for and actually enacts somewhat “conservative” policies.

It’s nice to blame him but isn’t it ultimately the voters who are responsible?

Sure. It’s Republican primary voters fault, but he is a snake oil salesman after all.

Hmmm 2 incredibly bad choices. Trump isin’t even trying to convince anybody how horrible leader he is. It’s his supporters who want to dietify him and make him a saint, all the while ignoring his obvious character flaws. On the other hand we have Clinton, who seriously lacks the strenght of character to achieve anything other than what the self-intrest serving backers desire. I still go with Clinton, because it lowers the possibility of apocalypse conciderably.

The only reason trump is being even concidered is that: People are sich of the horrible echonomical, and geopolitical situation.

PS: When people remark about American economical state, it´s good to note that the entire world isin’t doing all that well echonomically. That´s due neo-capitalism aka: Capitalism that’s sole belief is that debt results allways in expotential growth. The thing is that that is running to the end of it’s course and either: The form of capitalism has to change, or it´s fundamental rules have to change. This financial situation won’t be solved by any goverment, but by the world banks. We are pretty much moving to form of world order where major companies have all the decision power as they controll most world finances and less than 0,05% of population make all the decisions. The world’s financial situation really doesn´’t affect any of the leaders of the companies as their money is not tied to any country. Money really has no motherland.

Did you know: That there are only 5 countries in the world without debt? And those 5 are coutries that very few have ever heard about: Palau, Macao, British Virgin Islands, Brunei and Liechtenstein. They pretty much have less population combined than most minor cities alone.

Let´s talk about how much money a few countries have when debt is deduced from GDP.
USA has: GDP 18,295,304,XXX,XXX. And 99% of it´s debt to banks, investors and companies. Let’s compare it to Russia for example: it has only 16% of it’s GDP as debt. Making it about 1,2trillion richer than usa. China has 48% as Debt but it’s GDP is still 6,5 trillion dollars on the plus side. Yet boh countries here are increasing their debt currently.

It will be intresting to see what happens with Clinton or Trump in charge.

Writers note: Everything has been simplified for ease of read.

The US national debt is decreasing under Obama? That’s an interesting alternate reality.