There comes a time in the life of every T-Man and Vixen when the “normalcy” of the world away from the gym, kitchen, and forum becomes too much to take. Those dedicated to reaching their physique and performance goals are few and far between; we all yearn for that opportunity to associate with those like us. Plus, the idea of throwing around a lot of iron and eating damn near obscene amounts of animal flesh sounds really cool. With that in mind, after a bit of planning, I sat down and typed the following email to my best T-Bros in March:

Days ago, I had a revelation while struggling to breathe as I forced a cottage cheese container full of spinach, turkey, and flaxseed oil down my throat in between classes. Surrounded by peers (and I use that term loosely) who were either staring at me in disbelief, wolfing down 3-4 danishes and a cup o’ java themselves, or joking about their drunken endeavors of the previous weekend, I couldn’t help but wonder if a) I was in fact of the same species as these individuals and b) how the hell does one escape from such an environment? Then the lord struck me down with a bolt of lightning! While unconscious on the floor of the Alfond Center for Heath Sciences lobby, it came to me. I’m a T-man. I have friends who are T-men; they all feel my pain, and are probably constantly seeking an “out”-even if it is only temporary-from the bullshit that plagues out daily lives. We deserve this break. Okay, so maybe it wasn’t really this dramatic. Nonetheless…

So what does everyone think? Ready to trade in the BS for four days of T?

Suffice it to say that the response was quite enthusiastic. As such, with that email, the Maine Event was born. The dates June 19-22 and the town of Kennebunk, ME will never be the same. More to come…

Between Thursday morning and Sunday afternoon, Roman, Joel, MBE, Sully, and I managed to polish off:

Slightly more than 40 lbs. chicken
1.5 turkey breasts (about 12 pounds)
1.5 eye of round roasts (about 10 pounds)
4 lbs. moose steaks
4 lbs. ground moose meat
4 dozen eggs
1 bag beef jerky
1.5 tubs cottage cheese
An ungodly amount of MRPs, Low carb protein powders, and Surge
3 bags of frozen veggies
1/2 gallon salsa
10 or so apples/bananas
About 90 bottles of Fruit2O and bottled water (plus tap water)
4 babies (thanks for the great recipe ideas, Roman)
Several packages of Fig Newtons (Marion was popping them like tic-tacs)
Several loaves of Banana and Raisin bread (again, like tic-tacs)
1 large bag of animal crackers (MBE)
4 yams (EC with a bit of help from JR)
Some fat free cheese
2 boxes of sugar-free jello for EC
2,500 boxes of regular jello in which the strippers could frolic (at Sully’s insistance)

Canned tomatoes/moose blood, etc for Roman’s sauce
Plenty of supplements
30 blueberry pancakes and syrup (yes, MBE, I’ll let you know when I knock up the Johnson family’s daughter in order to get more free syrup)
1 box pasta and a jar of sauce (for Joel to wash down the Newtons and bread)
Various foreign beers, compliments of Sully (although Joel, JR, and EC did not partake)

Visions of mass amounts of red meat being BBQ’d, broiled, roasted…and I’m there to eat it all… bwahahahaha

While there certainly is a sexual connotation to the word, I see no problem in applying it to iron and animal flesh. Please get your mind out of the gutter and loosen your grip on Sully’s johnson:)

What are you studying to be surrounded by such type of people?

Sadly, I was a double major in Exercise Science and Sports Management; these are the future ACE-certified personal trainers and aerobics instructors of the future. Oh yeah, lots of future doctors in my classes, too. Scary, eh? 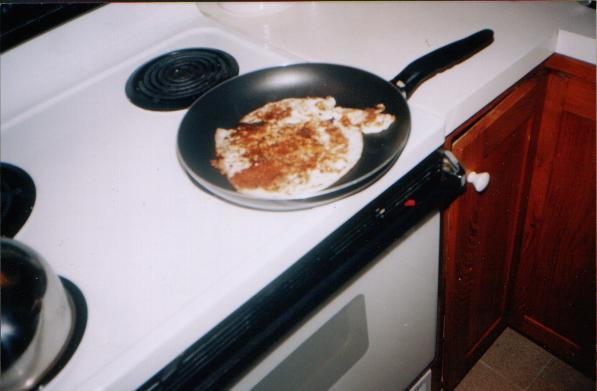 Here’s a scary-looking omelet. If you can guess what’s in it, MBE would be happy to make one for you…

Sounds cool, but living in southern Louisiana; I’m a little too far away. I feel your pain though Eric. I have yet to meet someone who eats like me or who knows why I eat the way I do. At least you know a few. 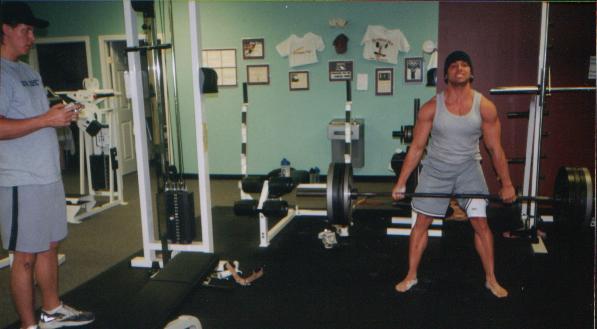 Here is Roman, making up for his stupid hat by pulling 405 with little effort. At left is Joel and his abacus, double-checking Roman’s 3rd-grade math skills to ensure that it really is 405. 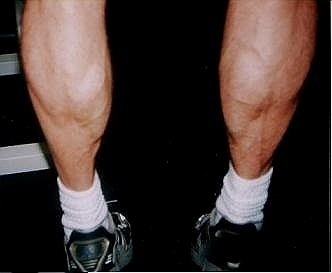 Cressey takes a break from his eating to show off some crazy calves. Please note he is a DIR veteran. 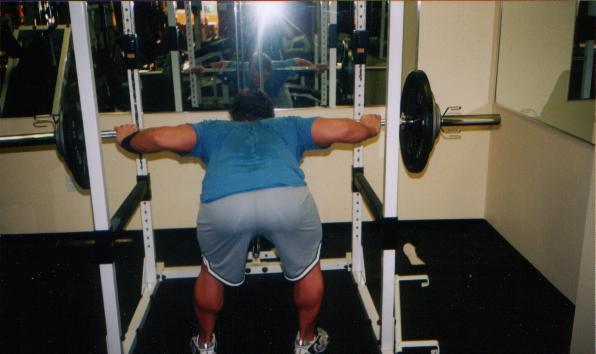 This Roman fellow sure has a tough time keeping his ass to himself.

I always find myself using an abacus for weight totals, but for convenience, I tend to bust out the slide-rule when I’m actually “in the gym”.

Anyway, sounds like a good time. I was kind of surprised that there was only 4 babies eaten. I saw Roman take down 5 one morning, but I guess with the rest of the food…

All I can say is that I’m jealous bro. Looks and sounds like a ton of fun. Somehow, I’ve got to figure out how to get you all to the West Coast. At least, Joel and I can hang at the Portland workshop.

In the mean time, it looks like Jesse, Ken, Kraig and I all need to get together for something like this in the near future.

I’m really glad you all had a great time.

EC - The tales of terror you’ve regaled us with actually make me “pine” away (heh heh… I bet only YOU get the pun) for a lobster-scented soiree in my home state.

Norcross - see you in August. Joel’s in charge of the Fig Newtons.

Sully - Beer DOES taste good. Ask Patricia. Her blood type is “A” and I’ll give you fourteen guesses as to what that symbolizes!

Sully, we should write some haikus on beer.