The Inconvenient Truth About Perfect Form

Technical Precision is Often the Enemy

Back in the Reagan administration, when I was running a YMCA weight room, one of the more interesting characters was an Olympic weightlifting coach named Nahasta.

Nahasta really stood out due to his insistence on achieving impossible levels of technical precision. I’m talking about lifting a broomstick for six months type of thing. Think “wash on, wash off,” only with a barbell.

Nahasta had just one dedicated student – a very skinny but motivated teenager who, in keeping with the Karate Kid theme, I’ll just call Daniel-san. Although he certainly had excellent technique, even after a year of consistent training, I never saw Daniel-san snatch more than 66 pounds or clean & jerk more than 88 pounds – lifts he could’ve easily and safely done on day one.

And Daniel-san’s physique mirrored the puny weights he was lifting. I still vividly remember this scenario more than 40 years later, probably because it inspired one of my key operational principles:

Technique need not be perfect; it simply needs to be “good enough” for the situation at hand.

Even though almost all lifting injuries are blamed on bad form, suboptimal technique rarely causes significant, acute injuries. Bad form isn’t ideal, of course. It definitely reduces the effectiveness of your training, so you should make reasonable efforts to improve your technique throughout your lifting career.

That said, if you happen to be an enthusiastic “technique-afile,” enjoy your passion, but don’t assume you should inflict your special brand of biomechanical OCD on everyone else. Excellent technique obviously has benefits, but less obviously, it also comes with significant costs: paralysis by analysis, slowed rate of progression, undermined confidence, etc.

So, intelligent technique analysis and correction require a contextual cost/benefit analysis. It’s one thing to insist upon a slight, barely perceptible change in posture for a highly motivated but injury-prone Olympic weightlifter who’s clean & jerking over 400 pounds. But it’s quite another to impose the same level of scrutiny on an orthopedically healthy 45-year-old novice fitness buff who’s doing curls with 15-pound dumbbells. 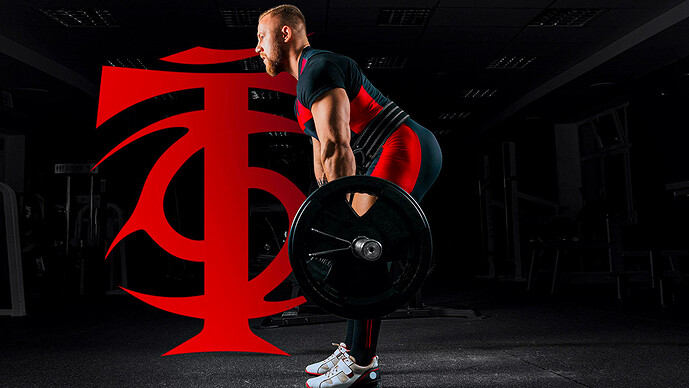 All serious lifters claim to have perfect form (it’s basically the virtue-signaling corollary to “I always eat clean”), but few of them can even define what that means, let alone demonstrate it in the gym.

Here are three observations about lifting technique. All three are counterintuitive and may be uncomfortable to accept:

The notion of perfect form is impractical at best – it’s impossible to define, let alone achieve. And, even if you could achieve perfect form, the juice isn’t necessarily worth the squeeze.

Aside from the fact that optimal technique depends on several factors, including the lifter’s anthropometry, training goals, injury history, and training age, it’s noteworthy that many universally accepted “rules” of good form have since been debunked.

One case in point is the age-old advice: never allow your knees to pass over your toes during lunges and squats. Enter Ben Patrick, aka “Knees Over Toes Guy.” Ben has recently exploded on social media platforms due to his controversial approach to rehabbing painful knees, which involves performing loaded, extreme knee-flexion exercises.

If Ben’s methods are legit (and so far, all available evidence suggests they are), it means that the more conventionally accepted approach to knee rehab is not only wrong, it’s as wrong as wrong can be.

In another example, sometimes popular exercises themselves have been shown to be more dangerous than they’re worth. For example, Dr. Stuart McGill, one of the world’s foremost low back pain experts, makes a compelling case that sit-ups and crunches, long thought to be beneficial for low back pain sufferers, actually pose significant risks to the lumbar spine.

Even if we had a bulletproof definition of optimal technique, the history of resistance training is rife with examples of successful lifters whose technique is sketchy. And there are plenty of lifters who’ve suffered significant injuries despite having seemingly impeccable form.

One well-known example is Konstantīns Konstantinovs, whose lifting resume includes a beltless deadlift of 939 pounds. Konstantinovs famously pulled with a conspicuously rounded back. And there’s no evidence that “KK” ever experienced a significant back injury. While I would never teach or recommend his technique, it’s clearly acceptable for some lifters.

These (admittedly anecdotal) examples are due to what statisticians call a “standard normal distribution,” which simply means that individuals respond very differently to the same stimulus. This means that even universally agreed-upon technique violations aren’t problematic for all lifters.

3. “Cheating” Can Actually Be Beneficial

Strategically applied “body English” can be quite productive. Here are a few practical applications to trigger your creative thinking:

Switch from strict overhead presses to push presses to extend the set as fatigue mounts. Adding leg drive to your overhead pressing doesn’t increase injury risk, and it allows you to use more weight and/or more reps by assisting the concentric/lifting phase of each rep. This allows for greater overload to the target muscles.

And even though some of that concentric work is shared by the leg muscles, the additional eccentric/negative work is performed by the target muscles alone. The only potential downside is that if you perform, say, 185 (3x5) on week one using strict pressing on every rep, and then on week two you lift 190 (3x5) using push presses, you run the risk of thinking you progressed when you actually didn’t.

However, this drawback can be easily mitigated by keeping detailed notes in your training journal.

Often, the strategic use of reduced range of motion can help you “bridge the gap” toward heavier loads. Think of it as using ROM as a form of progressive overload. For example, let’s assume you can leg press 455×10 using full (optimal) ROM, but when you attempt 500×10, you’re no longer able to complete 10 reps.

However, you find that 500x10 is possible if you allow yourself to reduce the ROM a bit. This being the case, it can be productive to perform these reduced ROM sets, provided you’re consciously attempting to gradually progress back to full ROM over the course of your training cycle.

Reduced ROM is a bad idea if you’re using it to cut corners (and deceive yourself into thinking that you’re making progress when you’re actually not), but using reduced ROM proactively and strategically to improve your performance is a useful tactic.

Perhaps your tight ankles prevent you from squatting in a proper upright position. However, if you squat with your heels elevated on a 1-inch block, you can achieve a much more upright position, thus allowing your squats to be more productive.

Many would consider this “cheating,” suggesting that you should instead be doing mobility work for ankles. I agree. But until you acquire the needed ROM in your ankles, why not use the blocks? Again, whether a technique is “good” or “bad” often hinges on your rationale for using it.

Occasionally, intentionally lifting with “incorrect” form can develop your strength in an unfamiliar position, which can provide you with an additional layer of protection if/when you (unintentionally) find yourself in these disadvantageous positions in the future.

One example is deadlifting with the bar a few inches away from your shins (as opposed to as close as possible). Is this technique less safe than using an optimal bar path? Of course (so is lifting 405 compared to 385). Is the protective benefit worth the risk? Sometimes yes, sometimes no… it entirely depends on the scenario. 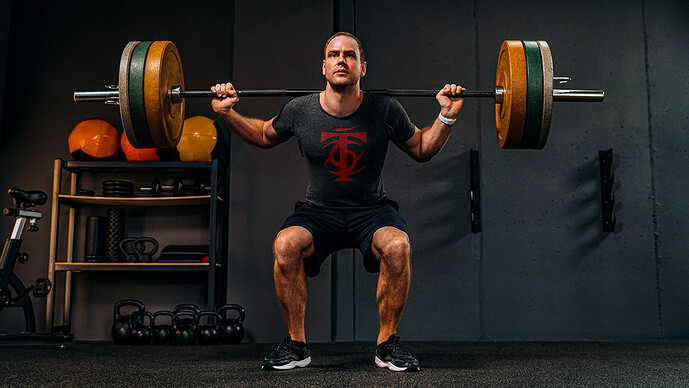 How To “Triage” Your Technique Improvement Strategy

Optimal technique is more important in some situations than others. Let’s dive into this a bit deeper. The most significant situational factors include:

“However beautiful the strategy, you should occasionally look at the results.” – Winston Churchill

Inappropriate concerns over “perfect form” also means you might be missing the forest for the trees. If you’re getting good results from your training and remaining relatively injury-free, your technique is probably sufficient, regardless of what the keyboard warriors assert.

On the other hand, if your lifting is failing to produce the results you expect or you’re always nursing a painful joint, give your technical résumé a good overhaul.

Hmmm, sorry but this is coming from the guy who’s body has not changed in 30 years? What’s your program, heavy lifting I see, looks like you have made no gains, time to look in the mirror? Feel and squeeze muscle, pause at top and bottom, good form and your done, your welcome. Every individual responds differently to certain exercises, you need to find ‘your’ way on your own. Ryan Humiston is changing the way people train by his body of (evidence) and scientific proof, muscle activation, high reps, good form. Perfect form was a word to inspire people NOT to have bad form.

Hmmm, sorry but this is coming from the guy who’s body has not changed in 30 years? 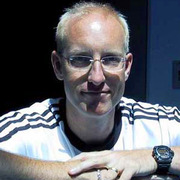 A 56 year old having the body of a 26 year old is an INSANE accomplishment.

Since you’re throwing stones, would you be so willing as to post a physique picture of yourself?

Every YouTube fitness guy with an audience is changing the way people train.

I sure can Tyrannosaurus forearm guy. I am 55. Not throwing stones either just tired of reading meaningless articles.

Do the pictures make me credible enough for you? 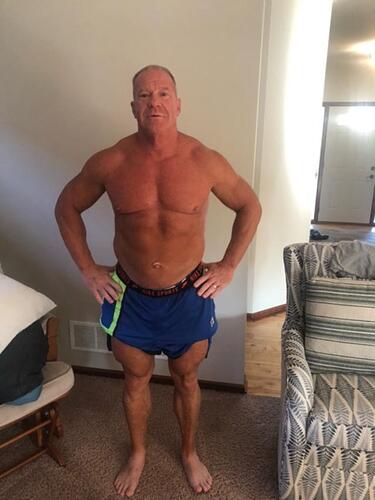 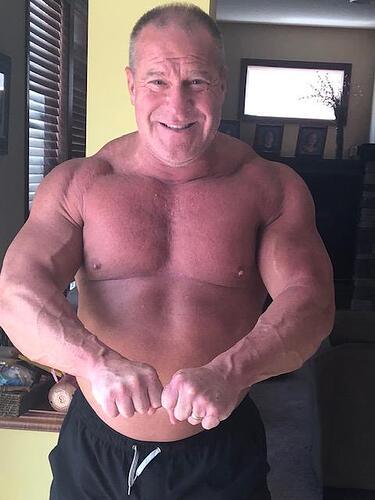 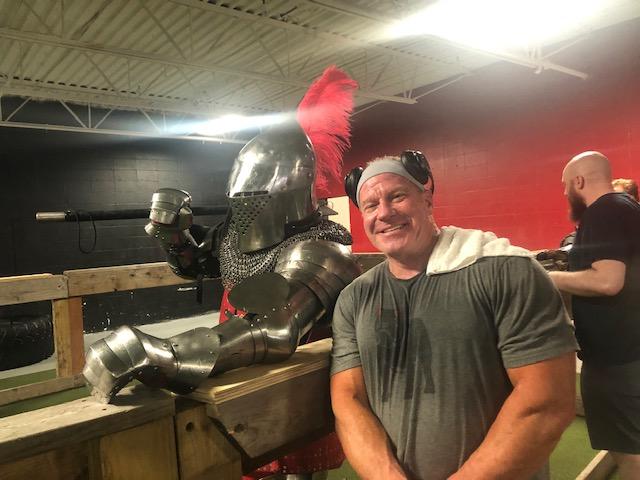 I agree, can we see yours? I posted mine.

Sorry…I should have said ONLY REPUTABLE, RELIABLE SOURCED, with proof of concept (their body) You Tube people. 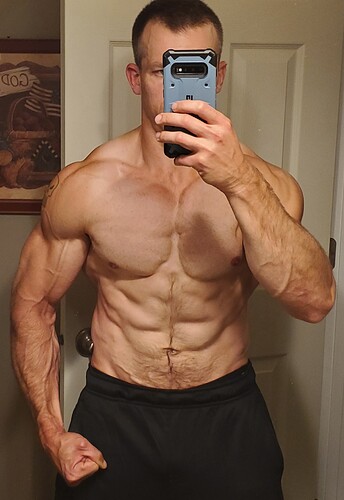 Respect to Charles for continuing to train but, this is the body of a 26 yr old? Maybe a 26 yr old gamer.

My dad is the same age, looks better and does not lift weights. 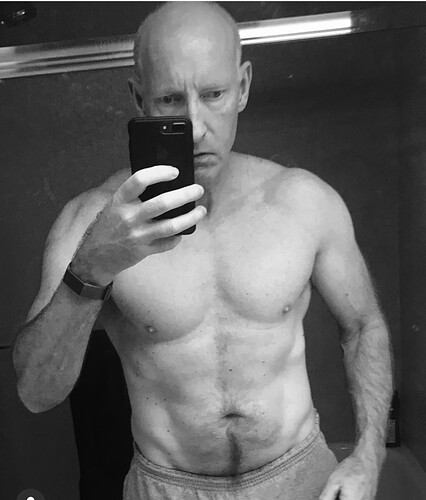 Should a coach not be judged by his body of work rather than his body in shorts?

Hey Thanks you look absolutely amazing T3. Are you in your 50’s too?

Staley is over 60 by the way (and not on steroids), if that adds anything to the convo.

I sure can Tyrannosaurus forearm guy

On this current timeline, no, but who knows?!

I thought that bio seemed out of date.

I really want to say yes but, find myself judging the body.

Though he does market himself as a coach that specializes in helping older people. So, his look may not be important to them.

Yes, Mr. Shugart, so sorry for the post, not trying to throw stones or be a jerk and Charles Staley is a legend in the training world, very highly respected but this article makes no sense to me. I am so sorry for expressing my opinion sarcastically. This body was created with the help of T-Nation supplements and articles. Thank you for the information on the web, an extremely reliable, reputable source of constant useful information.

You look great, respect that you posted a few pictures.

You’ve got that classic “middle-aged guy on steroids” red color going on here, you sure you didn’t have any help? Not judging either way, just saying this comes off as false advertising; take it as a compliment if natural.

For the record! I don’t neglect my forearms, I just have those big boy Whopper hands - not those Whopper Jr/Trump hands you see some folks have.

Please don’t let us scare you off from expressing your opinion, though - that’s what makes the forum great.

I don’t always agree with Mr. Staley’s articles myself; he had one against running many years ago that I really didn’t like. That’s a great thing, though: it would be insane for us all to see everything the same way.