The Fastest Way to Peel Eggs...

I do this all the time so don’t say it’s a trick. 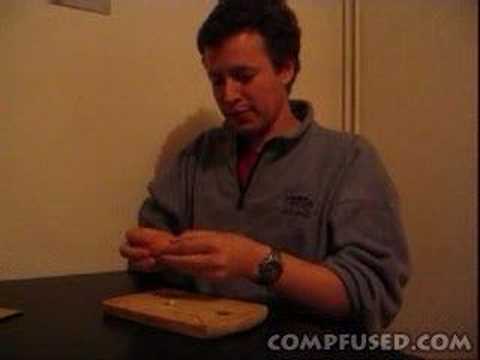 I’m going to ruin so many hardboiled eggs trying that!

[quote]k.elkouhen wrote:
I do this all the time so don’t say it’s a trick.

I can’t watch video. Anyone care to explain the process. I suck at peeling eggs

Process: Make a small hole at the top and bottom; take the egg in your hand and blow into the bottom hole (bottom is where the egg is fattest), catch the peeled egg coming out…

I’ve got to try this next time I boil eggs.

I can’t watch video. Anyone care to explain the process. I suck at peeling eggs[/quote]

Peel a little off of each end and blow the egg out.

Peel a bit off the center of each end of the egg…on the fatter end, peel off most of the shell around the center “bubble” (when it’s peeled, the egg can sit up on this end).

cup one hand around the bigger end to catch the egg…holding the egg with the other hand, blow as hard as you can into the smaller hole…and POOF…out comes the egg.

This is how I have been peeling eggs for the last few years, since the infomercial about a gadget that kinda does the same thing.

Thanks for the link. I just tried it and it took me two tries to get it right. Why didn’t I think of this before?

my girl peels eggs like than on the inhale.

I’m so going to have to try that.