Alright, I gots my test undecanoate. Recommended protocol for trt is 4ml(2ml per glute) at once. Its supposed to last for 10-14 weeks as a depot, slowly releasing over that time.

Surely 1000mg at once, then nothing for 3 months is going to give me a very uneven levels of testosterone?

Does anyone have any experience with this stuff, or any better suggestions for an injection protocol that will give me more stable test levels?

Lol. Pretty much any protocol will be better than this one. Who are the idiots that come up with this shit? 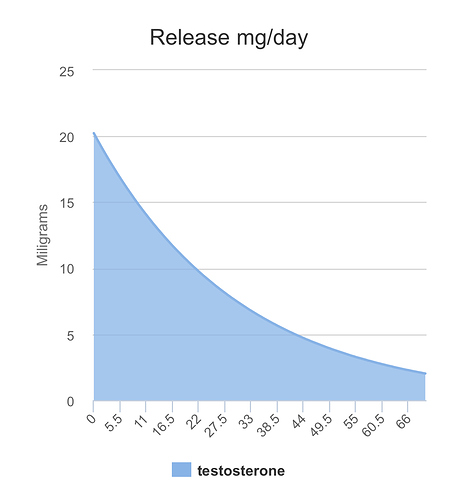 The reported elimination half-life of testosterone undecanoate is very long and it ranges between 18-24 days
I would divide the dose to once a week.
Is this all you can get?

Yep that’s all I can get. Its a legit script, and the authorities are very strict.

That totally sucks. What country are in?

The Nanny State of Australia.

Split the dosage evenly for 2 times a week

At the very least 1 times a week

Lol. Turkey is too risky cause Pres Erdogan is threating to send ANZAC’s home in body bags, after the recent Christchurch shootings.
(for any non Australian or New Zealanders ANZAC is Australian/NZ Army Corps, from the 1st World War, that invaded Turkey).

Idk which city you reside in but supposedly there’s a compounding pharmacy that supplies test injections. (I recently enquired about it on the TRT subsection).

If not… I mean they still sell designer compounds legally on eBay, not TRT and extremely toxic and thus not helpful, I just wanted to throw it out there that I can’t believe they sell this shit but test is illigal.

Yeah, but Msten is some reeeeeally good stuff.

How so? Have you taken it. Explain yourself young whippersnapper!

It looks toxic as fuck, structurally similar to (di)methyl drostanolone, except instead of a DHT base (the 2a methyl DHT which is drostanolone) it’s a DHB base (so 2a,17amethyl dihydroboldenone) dimethylDHB

Lost 3% bf on it but maintained my weight in four weeks. We’ll see what it did to my liver values when I get my blood work back on Monday. But it felt great.

How was BP? Did you get just liver or liver and renal function tested. What about lipids? (Although that might be irrelevant given you’re natural predisposition for a fantastic lipid profile).

Now that you’ve come on, do you actually expect to maintain weight given you lost 3% bf?

Got a full blood panel coming, including lipids. BP was never an issue. Dose was 7.5mg/d, so somewhat conservative compared to what others have used. I don’t know how much I’ll retain, though it was more for maintaining some size and strength while I was in a deficit. It wasn’t a cut per se, but more of an experimental recomp. I’m planning a major recomp cycle, which I will be outlining in a new thread sometime in the next few days.

Msten was my first foray into anabolics. I don’t know if it was genuine, but it made my balls throb, incredibly painful as it intensified, the longer I was on. I only lasted 3 weeks. Not the kind of mild occasional testicular pain you get from shutdown or start up.
It felt like my balls were in overdrive, pulsing like were beating hearts.

Didn’t feel any anabolic or fat burning qualities, which makes me think it was some kind of stimulant for the balls. I don’t want to risk that again, even if it wasn’t actually Msten that I got.